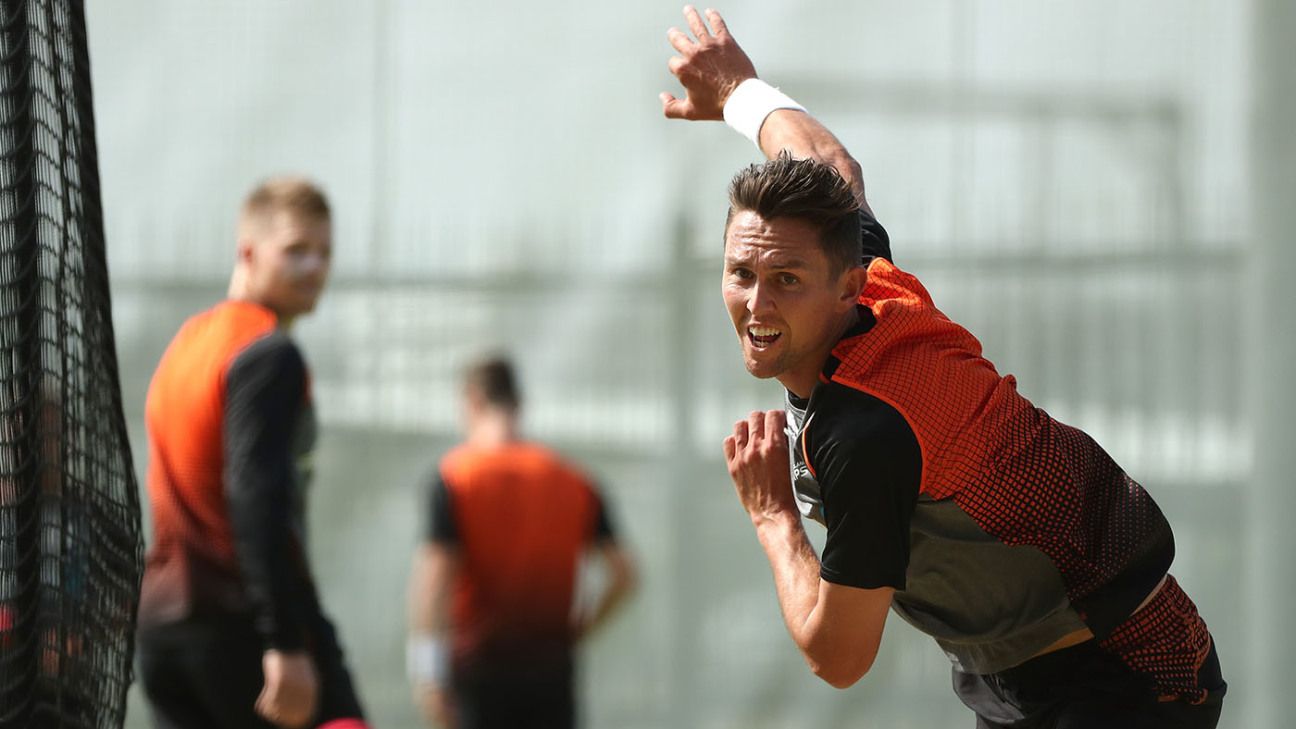 New Zealand have not had the most conventional of build-ups to either of the Tests in this series, playing a day-nighter in Perth with just three days’ preparation and now having to navigate a brief Melbourne heatwave which left them with a single day of middle practice ahead of the Boxing Day Test.

However, they have been industrious in making best use of what has been available, which includes Trent Boult briefly swapping sides and playing for a Victoria XI in order to get overs under his belt ahead of a comeback from his side injury. It will be a huge boost for New Zealand to have him with the new ball in hand even though it will remain a case of what-might-have-been with the pink one.

Boult faced his own team-mates on Friday as they took on a local XI on what was due to be the second day of the match. Instead, New Zealand used it all for batting with the exception of Boult who sent down 11 overs for the opposition and managed to remove Tom Latham.

“I was a proud representative of Victoria yesterday,” Boult said with a smile. “It was good fun. Nice to get some overs under my belt and field for a bit and get a bit of time in the legs. It’s all going well. I think I’ve ticked the right boxes in terms of my rehab and my preparations.

“I wanted to sledge Wags [Neil Wagner] but he wasn’t out there long enough.”

Jokes aside, it was important for Boult to have at least some semi-competitive overs under his belt having not bowled in a match since late November when he suffered the side strain in the opening Test against England.

Matthew Wade explained that the decision to take repeated body blows from Neil Wagner in Perth was the best way of getting through the short-ball barrage in Australia’s second innings.

On the fourth morning, Wade stood his ground as Wagner continued to pound the ball in and often just let the ball hit him rather than risk an attacking or defensive shot.

“I like to pull as much as anyone else but with the fields, two back, catchers under your nose, the risk verses reward for me is a little bit too much,” he said. “Pink ball verses red ball might be a little bit different, maybe the ball will stay a little bit harder so we can get a bit more reward for our shots.”

It was Boult himself who decided he wasn’t quite ready to return in Perth but he is now primed to lead New Zealand’s attack as they look to bounce back from the crushing 296-run defeat in front of what could be more than 80,000 people on Boxing Day including a large number of supporters from across the Tasman.

“Anyone who’s coming back from injury will tell you that there are a few psychological walls you need to break through,” he said. “But I feel I’m lucky enough to have had a taste of Test cricket. I’ve played around 60-odd Tests so I kind of understand what’s needed from the fitness side of view. I’ll be getting any of that out my head and try to give it a good crack out there.

“Everyone understands that the nets compared to the middle are a totally different kettle of fish so like I said, I’ve been ticking the right boxes in the nets. But come the middle, with the cameras on and 90,000 people watching you, it’s definitely a different occasion. I’m certainly looking forward to embracing the situation and hopefully it’s coming out in the middle as nicely in the nets.”

The pitch, which has been the subject of much scrutiny after the abandonment of the Sheffield Shield match between Victoria and Western Australia, is set to have a decent covering of grass with groundsman Matt Page insisting he has not been swayed from trying to inject some life back into the surface despite the recent misstep.

The headline tactic from New Zealand in Perth was their sustained short-pitched attack (although it is something they have used regularly) which gained good results but the game was gone by the time of Australia’s second-innings collapse. It is something Australia are expecting more of, almost regardless of the pitch, but Boult will be making sure he gives the ball every chance to swing and seam.

“We are looking at an unknown in terms of how that wicket’s going to behave or react,” he said. “We’re expecting something very different in terms of the wicket here from how it’s played over the last few years but there’s probably going to be something there. I’ll look to pitch the ball up, swing it around and hopefully get some wickets that way.”

New Zealand will make at least two changes to their side with Boult replacing the injured Lockie Ferguson and Tom Blundell coming in for Jeet Raval at the top of the order. They may also give consideration to a switch in their spin attack with legspinner Todd Astle an option to replace Mitchell Santner who struggled to provide control in Perth and did not take a wicket in 41 overs.