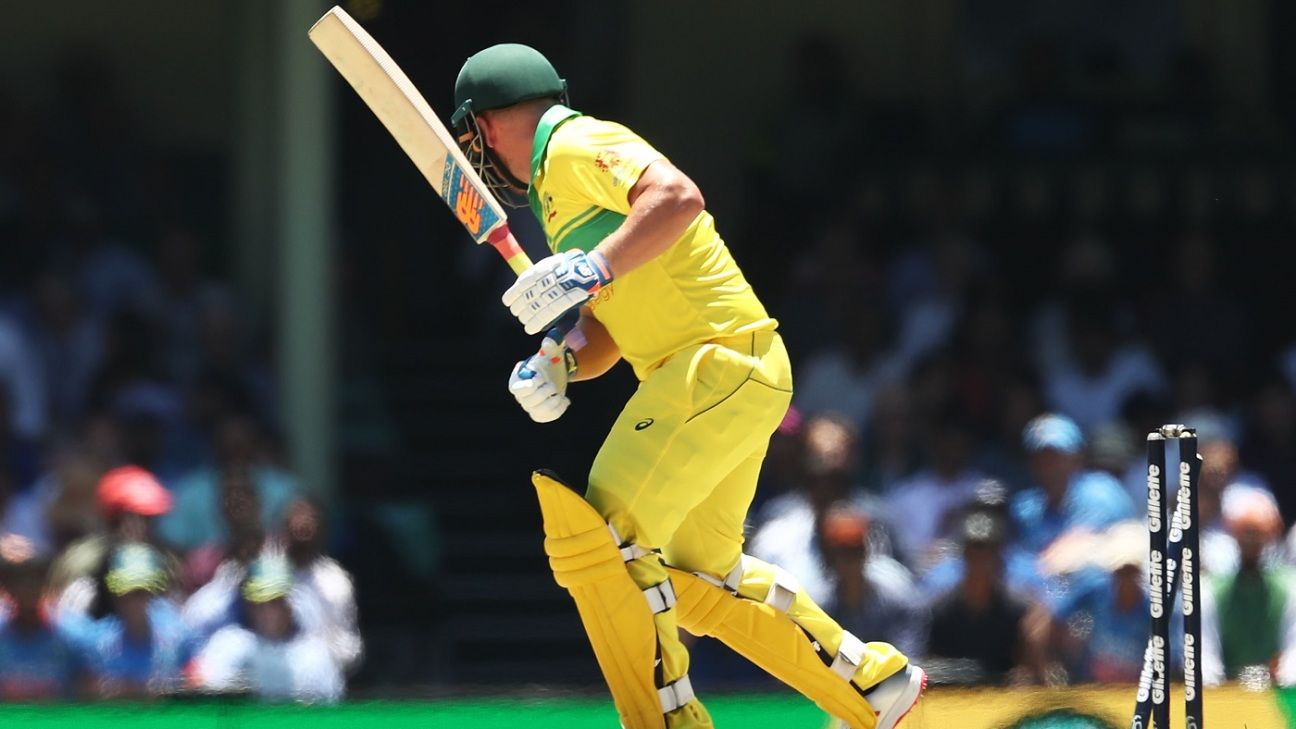 Australia coach Justin Langer hopes one-day captain Aaron Finch will get the “breaks” he needs to turn around a lean summer.

Finch has made scores of 6 the first two ODIs against India – bowled by Bhuvneshwar Kumar both times – to leave him with a top score of 41 in five one-dayers this season as well his low returns in Tests, which cost him his place for the final Test against India, and T20s.

The last thing Australia need heading into the World Cup is their captain to be short of runs, amid the other questions that need answering about the side, and Langer believes he is still adjusting to having played all formats in a short space of time.

“There’s not a lot of players who play all three forms of the game now,” Langer said. “This is brand new territory for him. He’s captain of the white-ball teams and playing Test cricket. He won’t be far off. When he gets going, he scores 100s.

“He’s working so hard on it. He just needs a few breaks. Every now and then you need a little break, and he’ll be away again.”

While Finch’s downturn in limited-over may be attributed to his stint in the Test side and his acknowledgement that it led to him over-training, one player who has been able to divorce the formats is Shaun Marsh and Langer lauded him as having the makings of a great one-day batsman after his 131.

Marsh’ century on a sweltering day was his fourth ODI hundred in eight innings and his average of 42.32 is currently the seventh best for an Australia batsman with at least 50 ODI innings – sitting between the banned duo of David Warner and Steven Smith.

Ultimately Marsh’s century was not enough as Virat Kohli and MS Dhoni masterminded India’s series-levelling chase with four balls to spare – all four of his recent hundreds have come in defeat – but at a time when gains have been hard to find in Australia’s white-ball cricket he is major tick for Langer who was proud of how Marsh responded to his Test axing.

“He’s turning into a great one-day international player,” Langer said. “You’d like to see him get 100s and win, it would have been a perfect day for him. After not being selected for the next Test series against Sri Lanka, with that pressure a lot of guys can shrivel up, but he hasn’t, he’s stood tall. He’s working really hard, he’s had a couple of good innings now. I’m really proud of Shaun.”

Marsh spent all but seven overs in the field in Adelaide as temperatures touched 45 degrees in the middle, a feat matched by Kohli with his matchwinning hundred. “What I’ve loved about him is his elite fitness and the fact he can get 130 in 40-degrees, at 35 years old, that’s a great tribute to him as well,” Langer said

Marsh’s stand of 94 with Glenn Maxwell had put Australia on track for a total over 300 before a late collapse. Maxwell contributed 48 off 37 balls which both showed what he was capable of from No. 7 and ensured the debate about his position would rumbled on.

“There’s a lot of debate about Maxi, but I think that’s the perfect position for him. The other night, he came in late, but that’s actually a good sign,” Langer said. “If he can come in and put the finishing touches like he does, it’s always a nervous time for the opposition.

“I honestly think, despite the debate, that’s his best spot in our team for us at the moment, and we’ll flick him in every now and then when we need a little cameo

“He’s probably the best fielder in the world, we love it, it’s contagious his energy. He’s got good leadership qualities. He brings a lot, he bowled well tonight, he fields well. He will be a very important part of our team if we are to win the World Cup.”