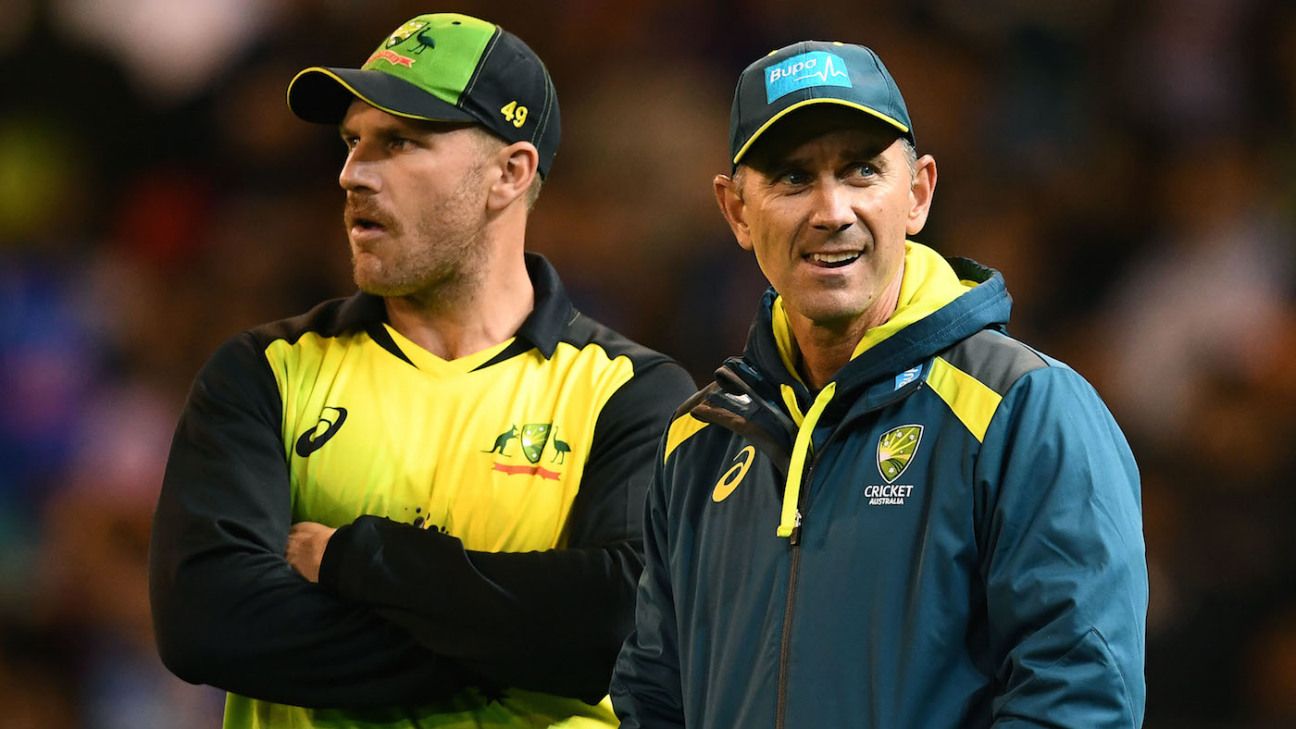 Australia’s captain Aaron Finch is firming to play in the opening international of the summer, a Twenty20 date with Sri Lanka at Adelaide Oval on Sunday, though he has no qualms about lending the leadership to Alex Carey or Pat Cummins should he still require more time to recover from a side strain that was initially disguised by a parallel back spasm.

The road to hosting the 2020 T20 World Cup has begun with a series of meetings, media commitments and training, with Finch and the coach Justin Langer eager to ensure the group chosen for six matches against Sri Lanka and Pakistan over the next two weeks starts to develop role clarity and comfort in each other’s company.

If Finch is unfit, there is the strong likelihood that the wicketkeeper Carey will lead Australia for the first time, after his leadership credentials were strongly endorsed by the selection chairman Trevor Hohns, who has gone as far as to say that he would like to see the South Australian leading the Redbacks in place of Travis Head.

“The two guys who are vice-captains, Alex and Patto, both are well-placed to do it. Everyone who’s involved with the leadership group is across a lot of things. They’ll have no issues stepping in if need be,” Finch said. “I don’t think it’s going to be a long-term injury. I’m feeling better and better every day. It’ll be a case of having a hit today, assessing how it goes, having a hit tomorrow and keep reassessing each day.

“Probably a little bit of a later diagnosis than what we first thought it was, a bit of a back spasm. It sort of started to get better and then I felt a bit of a twinge in my side. As a result, had a scan on Monday in Perth. Maybe last Friday actually in Perth. Just a little tear there, not a hell of a lot. So I still think I’ll be fine on Sunday.

“The back was the same thing [as end of BBL last summer]. The side is something that’s totally new. Sitting down for a couple of days in that Shield game at the Junction Oval and then coming out and trying to swing a bit too hard. It wasn’t one [shot] in particular. Could have been a number. I went pretty hard.”

Having worked assiduously alongside Langer to build a strong 50-over World Cup campaign out of the humblest of beginnings last year, Finch argued that the scheduling of plenty of T20 matches for the Australian short-form team over the next 12 months, certainly when lined up against their regular split of Tests, ODIs and T20s, should allow for a similarly promising build-up.

“It’s great that we’ve got 21 games of T20Is over the next 12 months leading into the T20 World Cup,” Finch said. “That’s probably the first step, having that continuity of selection in the T20 format. We’ve probably not had that in the past. It’s been a process of managing players of the back of Test series or high workload tours. It’s going to exciting to be able to have a similar squad over the next 12 months to two years with the two T20 World Cups back-to-back.

“The 50-over World Cup was exciting and certainly didn’t pan out the way we wanted it to. We fell two games short. But as the lead-up went, from about December right up to the end of that World Cup, we got a lot of things right. We built a lot of good stuff through the Indian ODI series and the Pakistan series in the UAE and continued that on. That’s a really key thing we’ve taken out of it and hopefully with this as well.”

As flagged by Langer to ESPNcricinfo, Australia’s T20 blueprint for the next 12 months will draw a lot from his experiences at the Perth Scorchers, who were masters of creating pressure through use of the game’s defensive skills, while also allying superior fitness to predatory fielding and proactive running between the wickets. Finch said that planning was certainly more advanced than at the same point 12 months out from the 50-over World Cup.

“A bit more advanced I would say, especially with the style we want to play,” Finch said. “We know what style we want to go with over the next 12 months. That makes it a bit clearer to be able to map out how you go about that. I expect it to be a little bit smoother. Obviously, with form and injury, the personnel can change. But the 14 guys we have got here, that’s the plan to move forward with. Over the next 12 months and leading up to that World Cup to have that solid base of 14-16 players that can take us into that tournament.

“It’s about having specific guys for the roles as well. Ashton Agar is in there as the allrounder, the spinning allrounder, if we do decide to play two spinners we’ve still got the option of three genuine quicks. If we go without the legspinner then we still have four genuine quicks as well. It’s just a bit of a change of mind-set of balancing up our team. It’s still going to be a case of managing players through workloads at various points. All in all, we want to win as many games as we can and create a style and culture around the group of winning T20Is.”