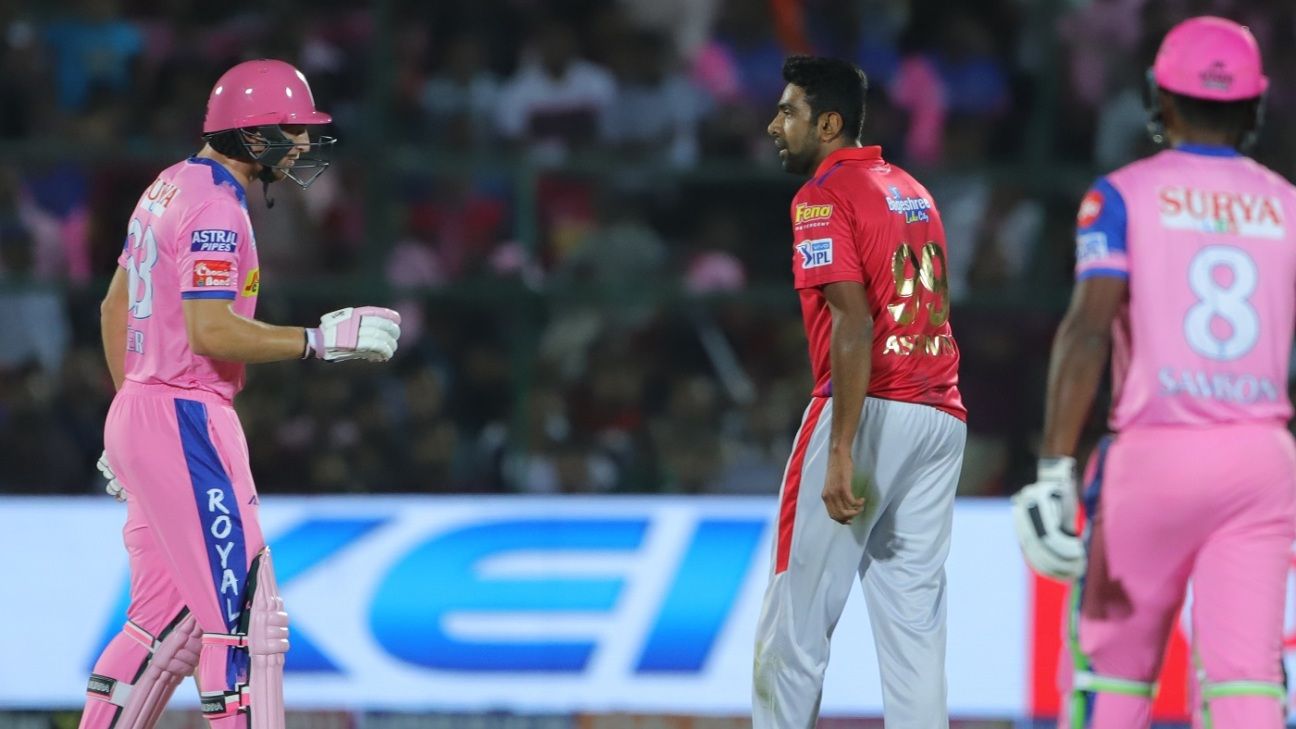 R Ashwin ran Jos Buttler out backing up at a crucial juncture in Rajasthan Royals’ chase against Kings XI Punjab on Monday evening. At that point, Royals needed a further 77 from 44 balls. Buttler was out for 69 off 43 balls, and his dismissal sparked a Royals collapse. They eventually ended up losing by 14 runs. Ashwin later called the run-out a “game-changer”.

The run-out became an instant talking point and triggered a raging debate with many former players such as Shane Warne weighing in and calling Ashwin’s actions unfair and against the spirt of the game. Ashwin did not cede any ground, saying his actions were within the laws of the game. Here is a brief explainer on what happened, what the rules say, and how the experts saw it.

It was the 13th over of Royals’ chase, and Ashwin was bowling his final over. As he stepped in to bowl the penultimate ball of his spell, Ashwin suddenly stopped, noticing Buttler stepping out of his crease. Ashwin turned around and knocked off the bails with the batsman just out of his crease.

This manner of running a batsman out is referred to as “Mankading“, after the legendary India allrounder Vinoo Mankad, who ran out Australia’s Bill Brown like that in the Sydney Test of 1947-48. Mankad, in the act of delivering the ball, held on to it and whipped the bails off with Brown well out of his crease.

Well, yes, Buttler was run out, and that’s about it, you’d think. Except, the stunned Buttler exchanged words and seemed to ask Ashwin, the Kings XI captain, whether he should have given him a warning.

What was Ashwin’s response?

Ashwin clearly told Buttler, “It is my space”.

Was Ashwin right under the Laws of Cricket?

The existing Law concerning Mankading is Law 41.16, which was itself refreshed from October 1, 2017. Law 41.16 states: “If the non-striker is out of his/her ground at any time from the moment the ball comes into play until the instant when the bowler would normally have been expected to release the ball, the non-striker is liable to be run out.” The non-striker would be run out “whether or not the ball is subsequently delivered”.

What did Ashwin say?

“There’s no real argument to that. It was pretty instinctive,” Ashwin told TV commentator Harsha Bhogle after the match. “I actually even didn’t load, so he left the crease. It’s always been my take on it, because it’s my half of the crease.” Asked by Bhogle whether he seemed to be almost waiting for Buttler to leave his crease, Ashwin disagreed. “Not really. I was not even at the crease. It was like he wasn’t looking at me. He just left the crease.”

When bowlers finish their pre-delivery jump and land on their back foot, ready to begin the delivery stride, they assume a ‘load-up’ position, with the bowling arm poised to begin its final swing, much like a catapult pulled back before its release.

So Buttler should be out?

Yes, but there is a possible grey area in the Law, or at least the way it is interpreted.

The part of the Law that says “… until the instant when the bowler would normally have been expected to release the ball”.

Sorry, all this a bit vague to me…

Fair enough. On Monday, replays showed Ashwin aborting his load-up midway through his pre-delivery jump, and coming to a stop without taking a proper delivery stride. Buttler was already on the move, but he only left the crease after Ashwin stopped. It could be a subjective call from the umpires to determine at what point he was ‘expected’ to release the ball.

So was the right decision made?

Depends on your interpretation of the Law. The third umpire, Bruce Oxenford, didn’t take too long before ruling it out.

What was the general response?

Commentators and former players were split on the verdict. Former Australia legspinner Shane Warne, who is also a member of the MCC World Cricket Committee and – not insignificantly – the Rajasthan Royals mentor, described Ashwin’s actions as “embarrassing”, “disgraceful and low”, and against the spirit of cricket. Several others, including Buttler himself, suggested Ashwin should have warned the batsman first.

Should Ashwin have warned Buttler first?

No. “It is worth stressing that giving a warning for such dismissals has often been seen as a convention but has never been part of the Laws. The fielding side has the option not to appeal, or to withdraw the appeal if they do not want to dismiss the batsman in this way,” the MCC said in December, while unveiling changes to various Laws including Law 41.16, which will be effective from April 1 – in six days’ time.

The MCC has also emphasised that the non-striker has to stay in the crease until the ball is released. “With TV now potentially ruling that a batsman has made his/her ground by millimetres, it seems wrong to allow them a head-start of sometimes several feet in setting off. So, the policy in the Law has not been changed but rather the outcome is being more strongly emphasised to avoid confusion.”

Is this the first time Ashwin has Mankaded a batsman?

No. He ran out Sri Lanka’s Lahiru Thirimanne the same way during an ODI in Brisbane in February 2012, but Virender Sehwag, India’s stand-in captain, withdrew India’s appeal and allowed Thirimanne to continue his innings. Ashwin has been a vocal defender of mankading on social media as well.

Is this the first time Buttler has been dismissed in this manner?

Again, no. Sri Lanka offspinner Sachithra Senanayake had caught Buttler wandering out of his crease during an ODI at Edgbaston in June 2014.