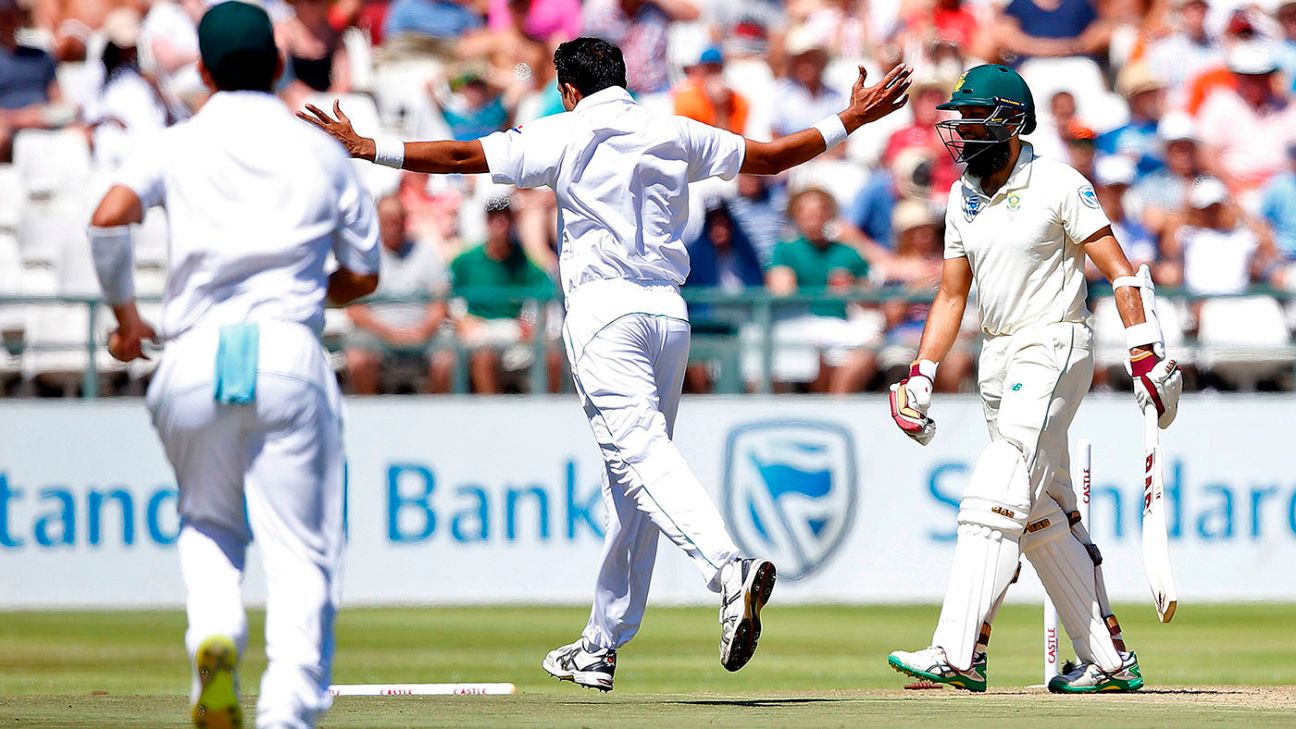 South Africa overcame the early loss of Hashim Amla to inch themselves into a first-innings lead on the second morning at Cape Town, but Pakistan’s toiling bowlers had reason to feel aggrieved at lunch, after once again suffering a setback at the hands of the third umpire.

Just as at Centurion in South Africa’s first-Test run-chase, Pakistan believed they had made a critical breakthrough in the second hour of the morning, when Temba Bavuma was scooped up in the slips by Azhar Ali off the bowling of Mohammad Abbas, only for S Ravi, the third umpire, to deem that the ball had been grounded before the catch was completed.

In Ravi’s defence, it was an excruciatingly close call, with Azhar’s fingers seemingly wrapped around the ball, but with the turf appearing to assist the completion of the catch. However, given that the on-field umpire, Bruce Oxenford, had given a soft signal of ‘out’, Pakistan had plenty reason to feel sore that the benefit of the doubt had again not gone their way.

But perhaps more galling than the decision was its timing, given that Bavuma was new to the crease, following the dismissal of Theunis de Bruyn to a wild slash to gully in Shaheen Afridi’s previous over. Bavuma’s departure for 3 would have reduced South Africa to 156 for 5, still 21 runs shy of first-innings parity, on a pitch that is starting to play a few tricks.

Instead, Bavuma and his captain, Faf du Plessis, endured to the break in a stand of 39 that helped South Africa into a slender lead of 11. Du Plessis was the mainstay of South Africa’s morning, with 33 from 79 balls.

The first wicket to fall was the most eye-opening of the day, as Amla, resuming on 24 overnight, was bowled round his legs in Abbas’s first over of the morning – a remarkable dismissal as the ball appeared to hit a crack from outside off, and jag sharply past his back pad and into the leg stump.

Amla did not add to his overnight score, and with Abbas proving a persistent menace on an increasingly uneven deck, runs were hard to come by. De Bruyn seemed to be settling in for the long haul on 13 from 32 balls when he lost patience against Afridi, and threw his hands at a wide one. Babar Azam, at gully, barely flinched as the ball fizzed into his upturned fingers.

At 149 for 4, another breakthrough could have exposed a few jitters in South Africa’s batting. But Bavuma’s reprieve put paid to that prospect for now.