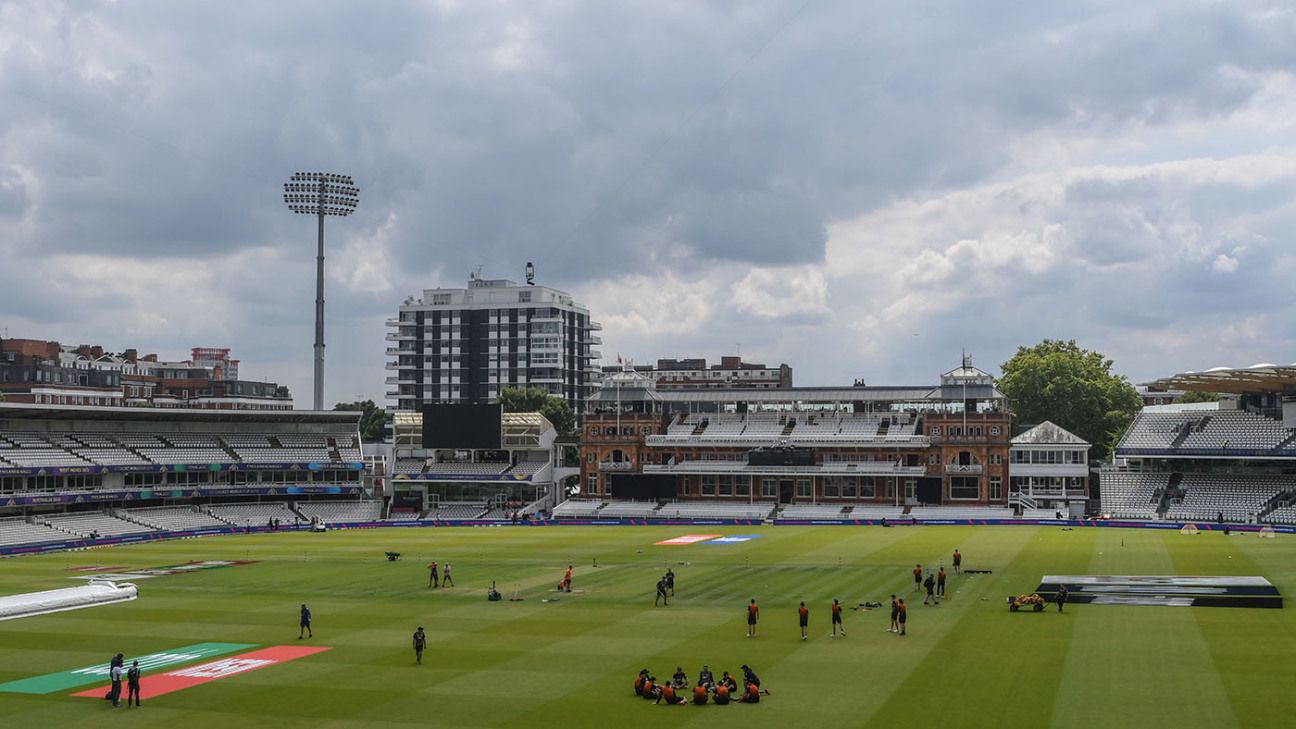 If there is one man as nervous as the two teams on Sunday morning, it will surely be Karl McDermott.

You could be forgiven for not having heard of McDermott. But he is the new Lord’s groundsman having been appointed at the end of the 2018 season. And, as a result, he is the man charged with producing the surface for Sunday’s World Cup final.

That surface looked, at first glance on Saturday, surprisingly green. At second glance, too. And while Eoin Morgan insisted “it looks greener than it is” and the grass will be cut again before the toss, it was a sight to have any seamer salivating.

Both teams have good seam attacks, of course. But the most obvious area where New Zealand could damage England is through Trent Boult and Matt Henry nipping the new balls around on a helpful surface. So a green pitch – one that ‘plays’ green, anyway – might be considered the biggest possible leveller ahead of a game in which England are the favourites.

England have made no secret of their preference for good batting tracks. So while they have a seam attack more than capable of exploiting helpful conditions – they proved that in the semi-final demolition of Australia – they also feel they have an attack capable of performing well on flat tracks. They have the pace of Jofra Archer and Mark Wood; they have the control and reliability of Chris Woakes; they have the leg-spin of Adil Rashid; they have the awkward variations of Liam Plunkett. They’re not really looking for any help from the surface.

Much the same could be said of New Zealand’s attack. But while their bowlers can do a decent job on any surface, if this match turns out to be a sprint between the batsmen of either side on a good batting pitch, there is only one winner. New Zealand have not reached 300 all tournament. It would surely be to their advantage if this match is played on a surface offering assistance to the bowlers. “Usually, it’s a fairly fair surface here,” Kane Williamson said. “But one that guys need to adapt quickly to; perhaps encouraging to seam bowlers on both sides.”

Also read: Preview – It all comes down to this – and it had to be these two teams

None of this is to suggest McDermott has erred in his preparations. He has an excellent reputation – he started his career at Clontarf in Dublin and has more recently been head groundsman at The Ageas Bowl, where he produced the track used in the 2016 Test against India – and, in general, this pitch offers less assistance to bowlers than its appearance may promise. His intention, no doubt, is to ensure it has decent pace and does not dry out. There is no suggestion – quite the opposite actually – that the ICC have intervened at any stage to request more bowler-friendly surfaces in this tournament. All groundsmen have insisted they have been left to their own devices to produce the best possible pitches.

But it is, perhaps, a surface that leaves both captains with a tricky decision to make at the toss. The team batting first has won 28 of the 43 completed matches in this World Cup – and the last five ODIs at the venue – with the pressure of chasing in high-profile games (and on, at times, deteriorating pitches) proving stifling. And while Australia put on 123 for their first wicket here when England inserted them in the group stages a couple of weeks ago, they had to come through a torrid first hour to do so. Had England’s seamers bowled just a little fuller – and, to be fair, had Australia’s batsmen not been so resilient – they may well have made match-defining breakthroughs in those opening overs.

They may also be mindful of the ODI between England and South Africa here two years ago. After 30 minutes of that game, England were 20 for 6 and the match was as good as over. England are a better, more adaptable, more intelligent side than that now, but this surface did evoke memories of that one.

The early start may be relevant, too. Domestic Lord’s finals – particularly those held towards the end of the summer – earned a reputation of providing disproportionate assistance to the team bowling first. Those 10.30am starts meant the pitches retained just enough overnight dew to help bowlers in the first hour. All too often those matches were a case of ‘win the toss; win the game.’ There’s a reason ODIs in England and Wales do not usually start before 11am. The semi-final at Edgbaston provided an echo of those days.

Morgan, who as a Middlesex player knows this ground better than most, seemed pretty relaxed about the pitch. “From afar it looks greener than it is,” Morgan said. “It will look different if the sun comes out in a few hours.” The sun didn’t come out, though; not much, anyway. By the time the covers were pulled on, it still looked almost identical to the pitch used for the group game between England and Australia. If the old adage is right that you should always look up, rather than down, to judge what the ball may do at Lord’s – ie, atmospheric conditions may be more relevant than pitch conditions – England may be reassured that the forecast suggests a warm and bright day ahead. Whether such sayings owe more to superstition than science is debatable.

It was telling, though, that Lord’s was not among Morgan’s favoured venues for this ODI team when listed recently. For while England have amassed high totals and enjoyed partisan support elsewhere (The Oval, Trent Bridge and Edgbaston were the venues he said his side most enjoying playing), no side has made 330 here since the last World Cup and, since the turn of the century, 300 has only been reached seven times.

The point of all this? England have built their reputation – to a large extent, anyway – upon amassing vast totals on flat batting tracks. There is little evidence – either historically or visually – that this is such a track. England undoubtedly have the ability win, but they may be called to adapt to the surface to do so.