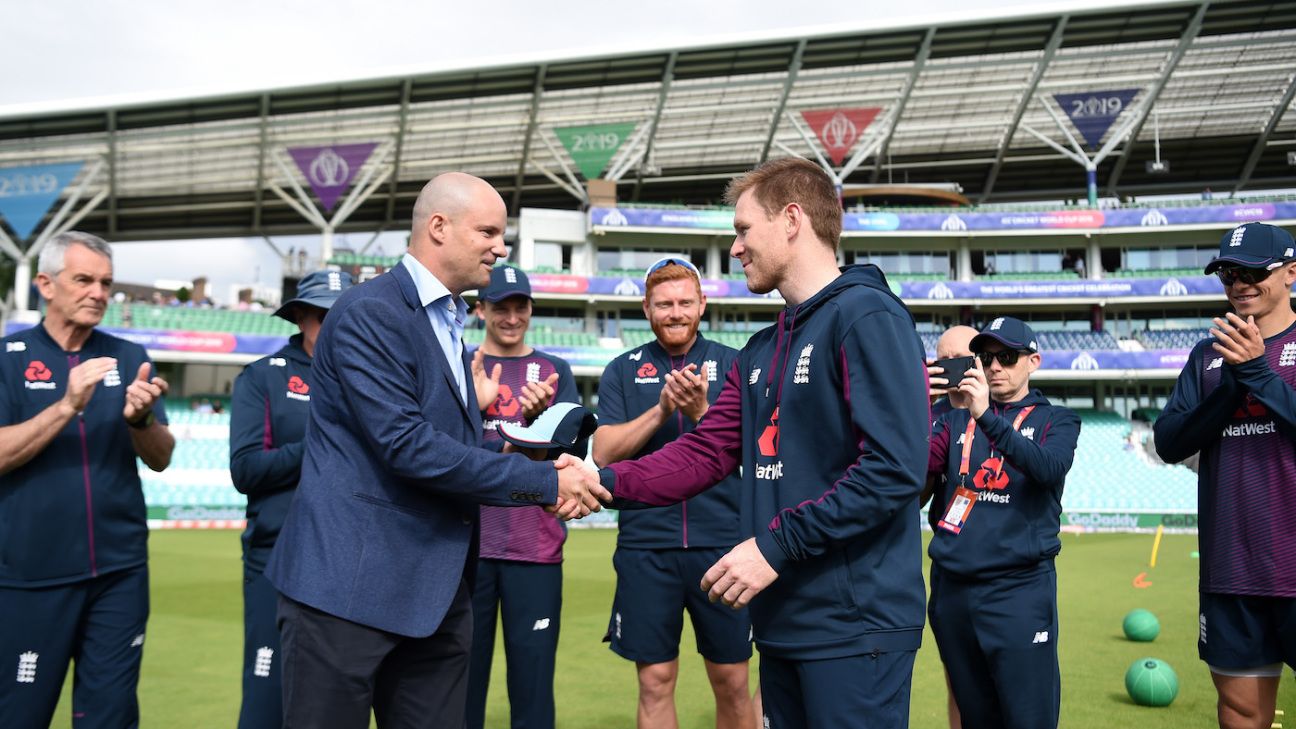 Andrew Strauss has said that the ball is in Eoin Morgan‘s court as to whether he stays on as England’s white-ball captain after leading them to a maiden World Cup triumph.

Morgan is unlikely to stay on until the 2023 World Cup in India, when he would be 36, but may lead the side in next year’s T20 World Cup in Australia.

Strauss, speaking at the launch of Ruth Strauss Day, said Morgan had “earned the right” to continue as captain.

“The question for him is what he wants to achieve here,” Strauss said, “because he has climbed Everest. That is the question for all the players, because we have made mistakes in the past. We’ve won Ashes series and got to No.1 in the world and thought that was the end in itself.

“We have to find a way of making this a launchpad for something bigger and better and that is a huge challenge.

“I certainly hope that what he is doing right now, unless he is absolutely clear he wants to carry on, is just taking a bit of time to reflect where he is at. To stay on as captain he needs to be driven and motivated to push people on as he has done over the last four years and if he has the bit between his teeth then we’ve seen just what a fantastic leader he is.”

Jos Buttler, who is currently vice-captain in all three formats, is Morgan’s most likely successor, and has previously led the side in six ODIs and four T20Is.

Buttler said on Monday there was “no reason” why Morgan should not stay on as captain. “There is plenty of life in him yet,” he said. “I hope [he carries on]. He has done an incredible job. He is the best captain we’ve ever had and all of us love playing under him. We are all very hopeful.”

But Strauss said Buttler would be the obvious candidate as Morgan’s successor if he chose to step down. “I think Jos is an outstanding cricketer and outstanding person – he reads the game very well. So if there is a vacancy, he is going to be a very strong candidate,” Strauss said.

ALSO READ: England’s World Cup winners, in their own words

When Strauss was appointed as team director in 2015, one of his first big decisions was to keep Morgan as captain despite England’s group stage exit in the World Cup under his leadership.

But he said that there was little question about whether Morgan would continue, and that he was the obvious choice once the ECB had identified the brand of cricket they wanted England to play moving forward.

“I was watching the last World Cup, working for Sky, and I was genuinely angry [about] what I’d seen,” Strauss said. “Not because of anything those guys were doing, but the same mistakes made in the two previous World Cups that I’d been involved in, and prior to my time as well, were being made again: playing the wrong brand of cricket, picking Test players and hoping they’d put some of the best one-day players in the world under pressure.

“I still remember my quotes from the 2007 World Cup that two threes are as good as a six. That was trying to justify something that you just couldn’t justify. To me, and this was before I was appointed director of cricket, we just could not do this again.

“Once I was appointed director of cricket, it was a case of well, if we’re going to prioritise one-day cricket, what do we need? If we want to play that type of style, who is the right captain to embody that?

“That led me very quickly to Eoin Morgan. He has always been a guy who hasn’t been afraid to do things his own way and to stick out from the crowd. He always had a very strong friendship with Brendon McCullum and instinctive desire to want to play that high tempo cricket. You can’t force anyone to do that, it’s got to be very comfortable with them. So it was natural that he would carry on.”

It is by no means certain, however, that Morgan is in England’s best T20 side. He hit an 29-ball 57 not out against Pakistan in May, but averaged 20.16 in his 14 previous innings, a run that stretched over two years and included only one fifty. England do not play a white-ball international until November 1, when they start a five-match T20I series in New Zealand, and their next ODI is in February 2020.

If Morgan were to give up the captaincy, it is likely that he would give up international cricket altogether. He has played in several franchise tournaments around the world, including the Big Bash, the IPL, and the T10 in the UAE.

He will be an ‘icon player’ in the upcoming Euro T20 Slam, and is expected to be picked as captain by the Dublin Chiefs franchise.

It is possible that Morgan will be back playing at Lord’s as soon as Thursday, when Middlesex start their Vitality Blast season against Essex, though it is likely he will be rested for that game.