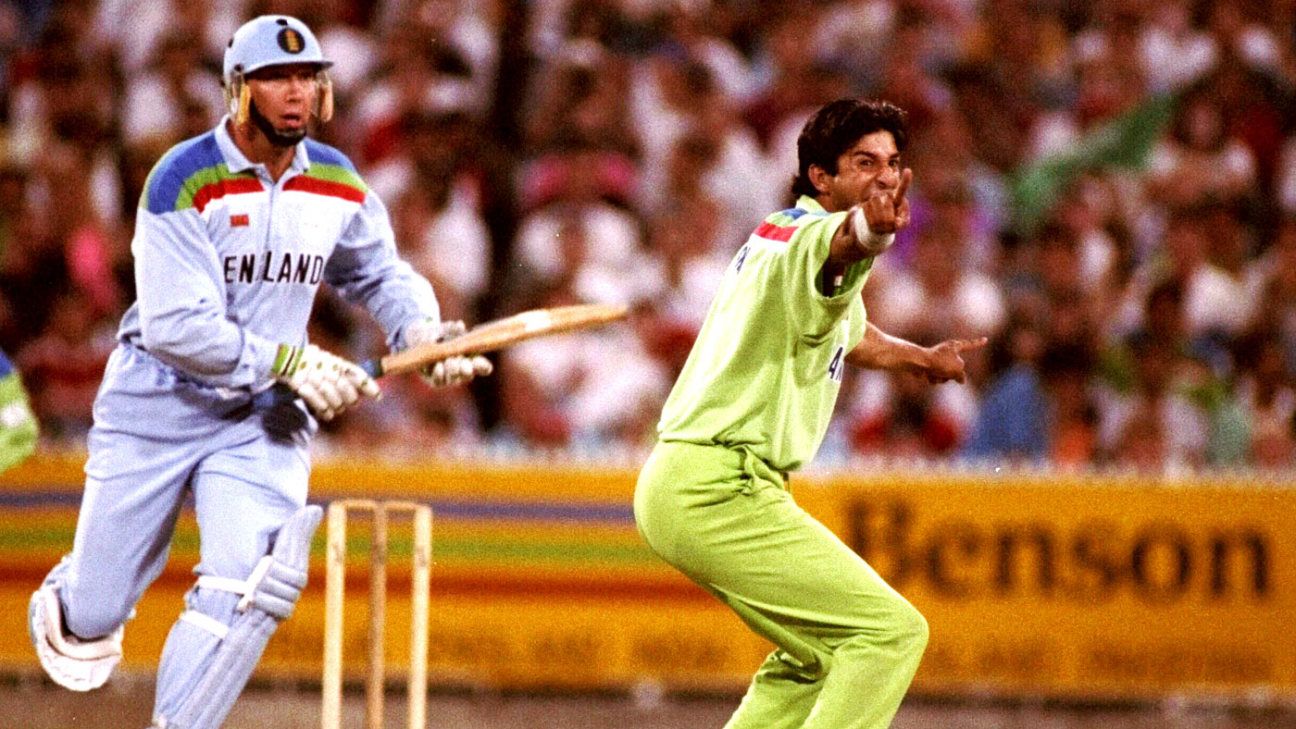 England have never yet won the World Cup in 44 years, although that might yet be about to change as they prepare to make it fourth time lucky in Sunday’s final against New Zealand. But how have they actually acquitted themselves in their 11 previous campaigns? Here we rate their failed attempts from least-worst to the absolute pits…

How can you legislate against genius? Wasim Akram‘s two-ball demolition job on Allan Lamb and Chris Lewis remains one of the most iconic passages of play of all time. Pakistan did what Pakistan do, and nothing and no-one was going to stand in their way – not even an England team that had spent the preceding weeks making a virtue of their bits and pieces, long before Sanjay Manjrekar turned their methods into a slur. Plus, there was that not-out lbw from Derek Pringle to Javed Miandad – he’d have been Sir Derek by now, had umpire Bucknor done the needful.

How can you legislate against genius, part two? No, not Viv – his century was just run-of-the-mill brilliant that day – but rather Collis King, whose madcap 86 from 66 was so ahead of its time, it might as well have rocked up in a DeLorean, direct from 2009, announcing that something had to be done about the kids. By contrast, England’s reply had more in common with Sunil Gavaskar’s iconic 36 not out from the 1975 event. Boycott and Brearley (honestly, Boycott and Brearley!) opened the innings with 129 in an eternity before the young guns (Gooch! Gower! Botham!) ran out of road. Alas, where England were going that day, they didn’t need roads…

Scher-wing! Gary Gilmour had played just two ODIs in his life, and none for more than a year. But, faced with slate-grey skies at a forbiddingly grim Headingley, Australia knew a horse for a course when they saw one. Much like Bob Massie’s 16-wicket match at Lord’s in 1972, England had braced for a very different sort of a threat, namely Dennis Lillee and Jeff Thomson hurling the ball at their heads. Instead Gilmour zipped and slithered on a good length, bowling 12 overs unchanged to claim 6 for 14 with five massive inswingers and one that went away to Tony Greig. Even then his work wasn’t done, as Australia, chasing 94, slumped to 39 for 6. Cue a run-a-ball 28, because when it’s your day, it’s your day.

Circumstances, circumstances … amid the miserabilia of England’s coloured-clothing World Cup era, the 2003 tournament deserves an asterisk at the very least. They had a side, lest we forget, with a bit of ticker about them – Trescothick, Knight, Stewart, Hussain et al – and they would surely have reached the Super Sixes but for their hanging-out-to-dry over the Zimbabwe issue. As for their eventual exit, well, it was brutal, but there’s a certain poignant what-iffery about Australia’s great escape in Port Elizabeth. Andy Bichel, Jimmy Anderson, that six into the scoreboard … ho hum …

Okay, so England reached the final in Calcutta and did jolly well along the way – Graham Gooch‘s sweep-laden century to break India’s hearts in the semi-final remains one of the great individual feats in the tournament’s history. But of course, England’s memories of this final are tarnished for myriad reasons. Mike Gatting‘s reverse sweep with the match at his mercy foremost among them (though England, post-KP, would simply claim “that’s the way I play” and move on from it). But more unforgivably, that shot let Australia off the hook after their most miserable decade of all time, and allowed Allan Border to don his jackboots and embark on a decades-long campaign of Ashes subjugation.

A ten-wicket marmalisation at the hands of Upul Tharanga and Tillakaratne Dilshan. Not a lot to write home about, right? Well, yes … except the manner of England’s parting was, for once, not the story of their tournament. In scenes not dissimilar to their wild ride to this year’s semis, Andrew Strauss‘s knackered band of erratics kept the 2011 tournament interesting, thanks to their extraordinary ability to raise and lower their standards to meet the perceived calibre of their opponents. Cue thrilling defeats to Ireland and Bangladesh, thrilling wins over South Africa and West Indies and an extraordinary tie against India. Oh, and they had just won the Ashes in Australia, so they get a pass for that as well (because no-one cared about 50-over cricket back then, did they?)

If West Indies had been paying even a smidgen more attention, rather than presuming their third title in as many tournaments was already in the bag, then India’s performance in their semi-final win over the hosts at Old Trafford might have given them a little insight into what to expect. Batting first, England stumbled to 213 all out on a deck that favoured the sort of accurate, nibbly bowlers of which India had an abundance. England’s quicks, by contrast, came onto the bat rather nicely for the likes Yashpal Sharma and Mohinder Amarnath. India’s comprehensive six-wicket win took them one step closer to that game-changing triumph.

Meh… 2007. Did it actually happen? Someone fell off a pedalo, and Paul Nixon played a nifty reverse-sweep against Sri Lanka (but England still lost, of course). Beyond that, Michael Vaughan‘s men were so anodyne that it is not actually possible to pinpoint when and where they eventually dribbled out of contention.

Abject, abject, abject. The pits, the nadir, the data that was late (err?)… The only saving grace of 2015 – and to be fair, it gets some serious brownie points for this – is that Eoin Morgan, England’s belatedly appointed one-day skipper, was able to say “never again” after a clutch of GOAT humiliations, and someone in authority (Team Director Strauss, in fact, the man who had probably said similar to no-one in particular four years earlier) was in a sufficient position of authority to formulate a plan for world domination …

When your pinch-hitter being sick on the pitch is more memorable than any of his actual pinch-hitting (sorry, Neil Smith, but really…) you know you’ve hit a bum note on the world stage. All things being equal, the 1996 campaign was in fact England’s most abject of all time, in that they had no idea how far off the pace they had slipped – the world had turned on its axis since 1992, and England’s reliance on three Texaco Trophy matches a season (always in May, always 55 overs, always 3-0 to the home team) was a denial of the sport’s new realities. When Sanath Jayasuriya tore them a new one with his 82 from 44 in that legendary quarter-final in Faisalabad, England at least knew what sort of a corner they’d backed themselves into, even if they had no idea where or how to turn …

… and if 1996 was hubris, then 1999 was nemesis. As we all know, it’s been 20 long years since England last hosted the Men’s Cricket World Cup, and that’s an awfully long time to have to sit and stew and wonder what might have been. The lack of planning, the lack of preparation, the lack of recognition that a tournament that had cut its apron-strings in 1983 and had grown beyond all recognition on its trips to India (1987), Australia (1992) and back to Asia (1996) was suddenly rather A Big Deal. And the manner of England’s exit was especially miserable. A rain-delayed defeat on a sparsely attended second day against India at Edgbaston, set against the gnawing dread caused by Zimbabwe’s shock defeat of South Africa. Fittingly, England didn’t even see the threat of elimination (or the opportunity of progression) until it was gone. And the less said about the World Cup anthem, the better.