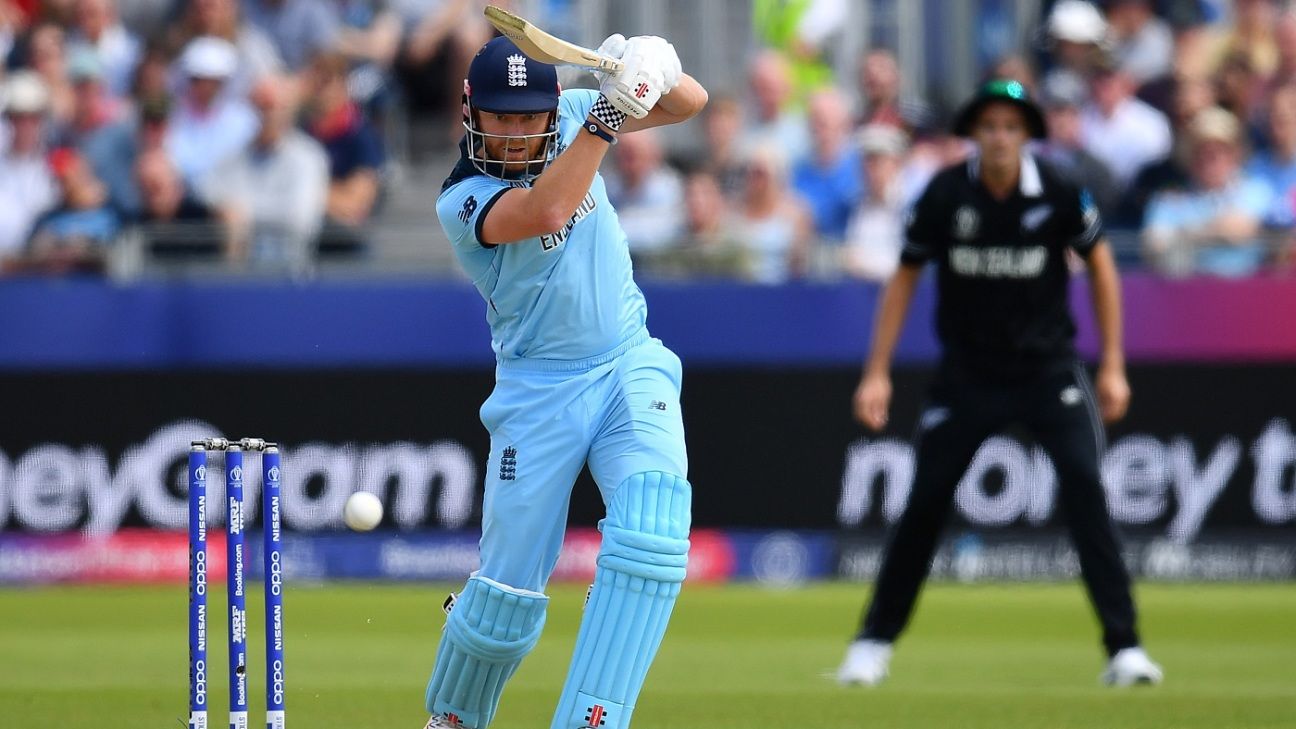 England’s build-up towards the 2020 T20 World Cup will begin in earnest this week, with the start of their five-match series against New Zealand, and Jonny Bairstow hopes the squad can channel the momentum of 50-over success into next year’s campaign in Australia.

England lifted the World Cup for the first time in July, having overhauled their ODI cricket under the captaincy of Eoin Morgan. Although there has been less of a focus on T20 cricket, England did reach the World T20 final in 2016 and the core personnel in the white-ball teams is largely the same.

In New Zealand, Morgan will oversee a squad featuring several new faces looking to make a mark. Bairstow is one of the senior batsmen on the tour, with Jason Roy, Joe Root, Jos Buttler, Ben Stokes and Moeen Ali all rested, and after top-scoring in England’s warm-up victory in Lincoln on Sunday, he was excited about the challenge ahead.

“I think it does feel like the start of that journey towards the T20 World Cup,” Bairstow said. “It’s going to come around thick and fast. Seeing guys who’ve played county cricket taking the step up to international cricket is going to be fascinating. That, coupled with the guys that are not on this tour but will come back into the team, there’s going to be competition for places.

“The cycle for the 50-over World Cup started four years ago. Hopefully we’re fortunate enough that the way we’ve played our 50-over cricket will lead us well into our T20 cricket.

“It’s a fascinating period to be playing cricket for England. There’s some very, very talented guys that have played a lot of cricket now for England that are all together and have the experience of going through the ups, the downs and everything in between.”

While the T20I format tends to lose context between major global tournaments – England’s last outing, against Pakistan in May, saw Ben Duckett open the batting and Ben Foakes take the gloves – there is now a clear 12-month run-in for teams to hone their approach. Bairstow is one of a number of England players to have benefited from the ECB hierarchy relaxing its stance on IPL participation, and he suggested the Hundred could also increase Morgan’s options.

“You’ve got guys playing T20 in competitions around the world whether that be the Indian Premier League, Big Bash or whatever it may be, so I’m not too sure it’s going to make too much of a difference,” Bairstow said.

“Then you’ve got the Hundred that’s starting next year so that’s an even shorter format that will allow people to put their skills on show to potentially push for that squad.”

The tour will also bring together many of the same players that contested the 50-over World Cup final during the English summer, on an emotionally draining day at Lord’s. New Zealand’s defeat on boundary countback is likely to gain a mention, even if there are no ODIs scheduled, and Bairstow said they were wary of the hosts’ qualities – despite captain Kane Williamson missing the series through injury.

“They’re dangerous no matter what,” he said. “We’ll be expecting a very tough challenge and that’s every time you play against New Zealand because they’ve got quality all the way through. They are a great bunch of fellas but naturally what happened at Lord’s is going to be quite tough for those guys and there will be a fire in their belly and a hunger to put things right.”

England could also draw inspiration from watching the rugby team see off the All Blacks in Japan on Saturday morning, setting up the possibility of more World Cup glory at New Zealand’s expense.

“We all watched it at the team hotel and it was amazing to see,” Bairstow said. “To say you’ve watched the Rugby World Cup in New Zealand when England were playing New Zealand is pretty cool. Two England World Cup-winning teams in one year would be special, wouldn’t it?”