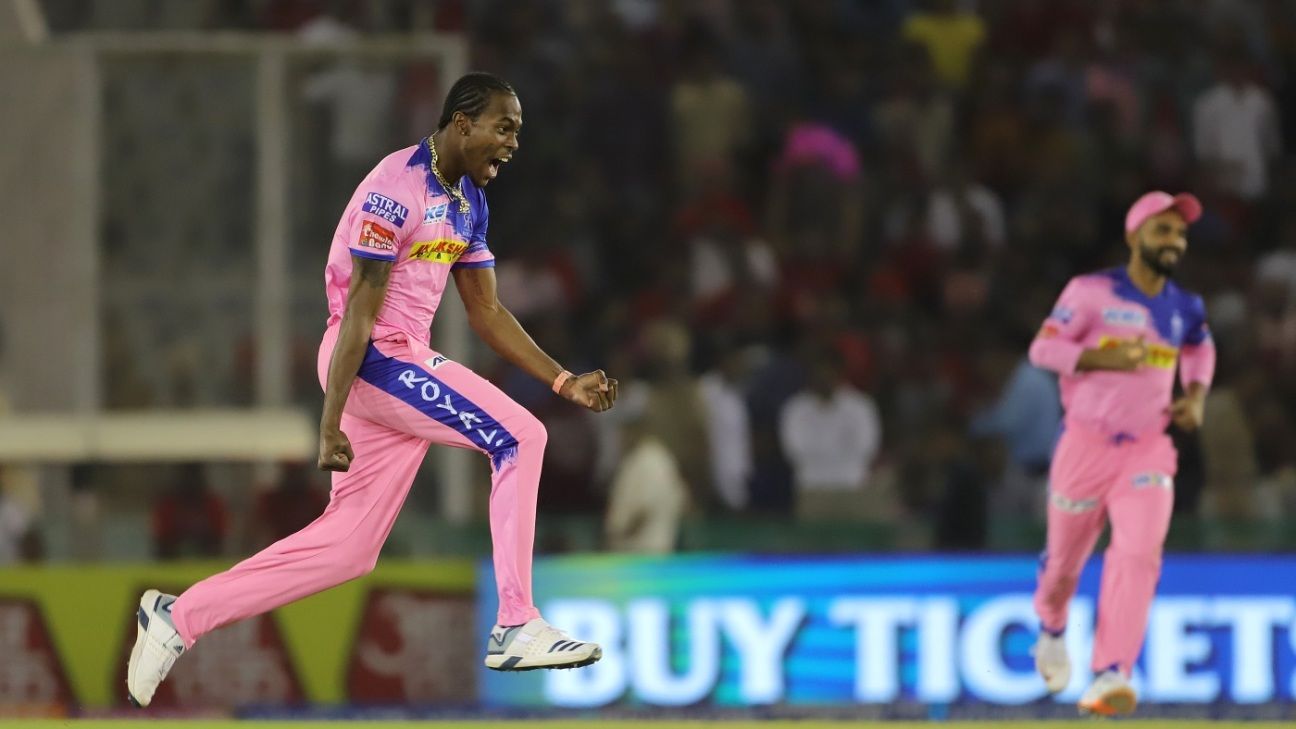 Having the option to pick three squads gave Ed Smith and his fellow selectors a chance to keep just about everyone happy and they have done so. The provisional England squad is little more than a marketing tool to ensure the World Cup claims a place in the news in the approach to the tournament. The real business – selecting the final 15 – remains more than a month away.

We can conclude, therefore, that Jofra Archer‘s inclusion is dependent upon how he fares in the forthcoming games against Ireland and Pakistan. He has played only 14 List A matches and will have to learn fast, but it will be a surprise if he does not impress enough to force his way into that final 15. He is an outstanding talent and he has had experience of high-pressure cricket in various T20 tournaments.

The thought of him bowling in tandem with Mark Wood – have England ever had a quicker ODI bowling partnership? – is mouth-watering. Liam Plunkett and Tom Curran look most vulnerable, but Chris Woakes has been nursing that sore knee for a long time now. He has to be considered a doubt.

Opinions over whether Archer should be included appear to be divided pretty much into those who think he should and those who are the incumbent England seamers. Really, asking them their opinions is a bit like asking butchers what they think of vegetarianism.

There is, however, a valid concern over whether the squad could be destabilised by insecurity at this late stage. Building such a unit is always dependent on maintaining the balance between meritocracy and security. Players encouraged to engage in fearless cricket need to know they will not be dropped if they endure one or two modest games. The thought that a few may now be looking over their shoulder when they should be concentrating on the task in front of them is a legitimate worry.

Equally, though, you cannot build too cosy an environment where the opportunity to improve is spurned. Archer looks to be a player of huge ability who could potentially strengthen the England side. This is, after all, a team that allowed Chris Gayle to hit them for a six, on average, every 8.10 deliveries during the recent ODI series against West Indies. You cannot concede a statistic like that and feel secure in your place in the team.

It would be brutally harsh to leave a player like Plunkett out given his excellence in recent years. But he does appear to be in gradual decline and international sport is brutal. The overall strength of the team has to supersede individual ambitions.

Change doesn’t have to destabilise, either. Take the World T20 of 2010, for example. Craig Kieswetter, who was Man of the Match in the final, made his debut in the first game of the tournament. So did his opening partner, Michael Lumb. Michael Yardy had played just three T20Is previously, while James Anderson was somewhat surprisingly omitted to make room for Ryan Sidebottom. It remains the only global, limited-overs trophy the men’s side has won.

“Amid all the noise around Archer, it has gone relatively unnoticed that Joe Denly is in the World Cup squad despite not having played an ODI for a decade”

Ultimately, it will be for the England team management to ensure the changes are smoothly handled and beneficial. They did little to play down the consequences of Archer’s impending qualification during the Caribbean tour – they reasoned it may motivate the current team members – but they will soon need to focus and calm their first choice squad. It surely bodes well that they have done a good job of managing the competition for the opening batting spots.

Either way, Smith dismissed the idea that the team would be destabilised, following some eye-catching headlines involving comments from Woakes and Mark Wood.

“If you read those comments really carefully, if you read the whole piece, you’ll see Woakes specified he was not concerned about team unity with Jofra Archer coming into the squad,” Smith said. “He feels those comments were taken out of context. He went on to say he didn’t believe there would be any disruption. Eoin Morgan also confirmed that he didn’t think there would be any disruption.

“I believe a strong team culture enables the gradual evolution of the side. It’s a small change here and there that can make the squad even stronger when it matters. Everything we’re doing now is geared towards England having the best squad available at the World Cup.”

Amid all the noise around the availability of Archer, it has gone relatively unnoticed that Joe Denly is in the World Cup squad despite not having played an ODI for a decade. Denly is a fine cricketer but he owes his selection to two key factors: Smith’s apparently unwavering belief in his ability – for Smith is clearly something of a champion of his former team-mate – and the premise that he is a spin-bowling allrounder. And that second point is highly debatable.

Certainly, the statistics don’t endorse Smith’s description of Denly as “one of England’s leading spin bowlers” in the format. In a 15-year-career, he has claimed just 46 List A wickets, with 24 of those taken overseas. Only once in an English season has he claimed more than four wickets. His selection reminds us, yet again, about the lack of depth that currently exists in England’s spin-bowling resources.

Maybe that is slightly unfair. Denly’s batting is perceived well enough by the selectors that he went in at No. 3 in England’s last Test. And as Smith points out, he is “very unusual cricketer” in being able to bowl spin and bat in almost any position, though much the same could be said about Moeen Ali.

Still, the sense remains this is a throwback to the days of ‘bits and pieces’ selections when general utility took precedence over any specific excellence in either discipline. Memories of Vince Wells, Ian Austin and the 1999 World Cup come flooding back. And, with respect to those fine cricketers, they are not great memories.

There is very little probability that England will select a three-spinner attack at any stage in this World Cup and, if either Moeen or Adil Rashid suffers injury, the likes of Denly or Liam Dawson are probably little more than a couple of hours away. With Archer or Chris Jordan – who surely has extra value as a high-quality substitute fielder and stood above his fellow seamers at the end of the Caribbean tour – pushing for inclusion, Denly will have to put in a couple of persuasive performances over the next couple of weeks. You suspect most opposition players would rather see him in the England line-up than Archer.

It probably bears repeating here that Archer has, and has had for many years, a UK passport courtesy of his British father. He’s British, he’s qualified and he’s a fine cricketer. Worrying about the implications of his inclusion would seem to be conjuring a negative out of a considerable positive.