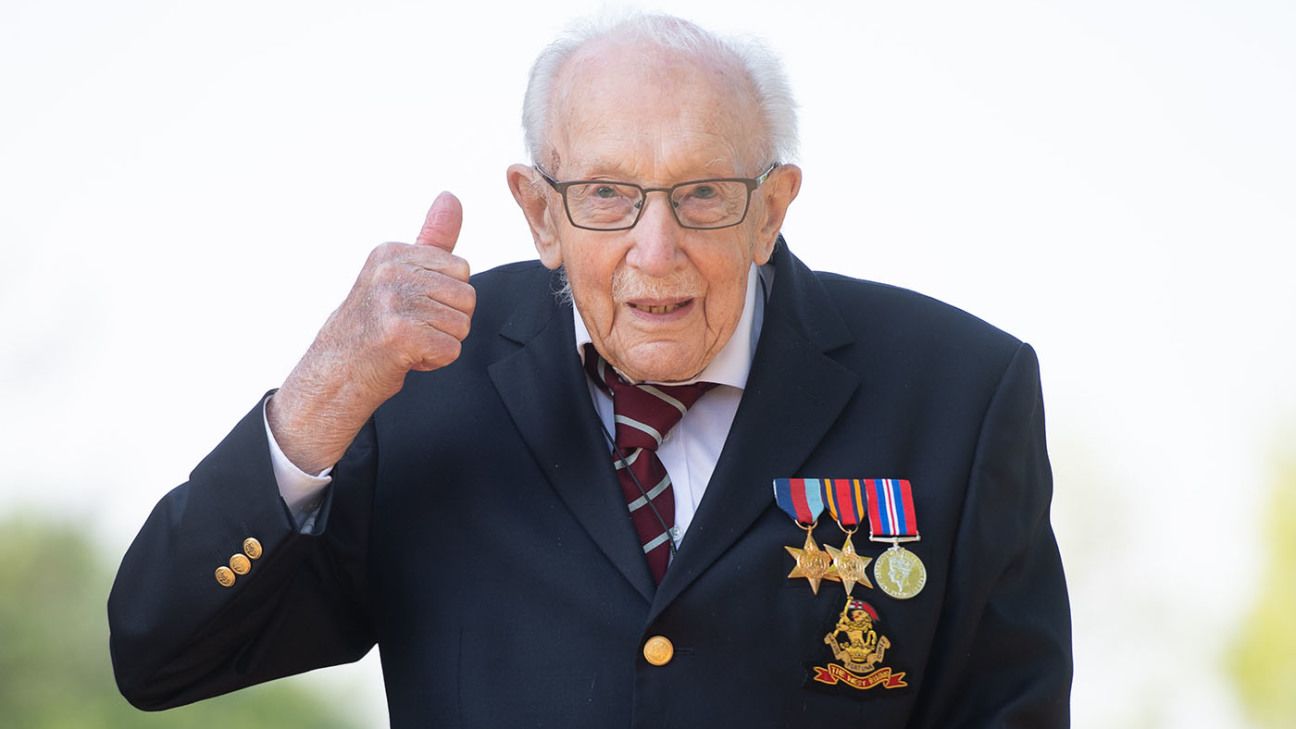 Colonel Tom Moore, a World War 2 veteran whose fundraising efforts during the coronavirus crisis have been lauded throughout the UK, has been presented with an England cap and invited to address the Test side to mark his 100th birthday.

Colonel Moore captured the imagination of much of the nation when, weeks ahead of his birthday, he embarked on a sponsored walk around his garden to raise funds for NHS charities. Inspired by the work of NHS workers during the Covid-19 pandemic, Colonel Moore aimed to raise £1000 by completing 100 laps of his garden – 25m a time – before the end of April. He walks with the help of a frame.

But that funding target was soon left far behind and, on April 30, the day of his 100th birthday, the total passed £30m. It is believed to be the greatest amount of money raised in an individual charity walk. Also in April, he became the oldest person to have a number-one single in the UK.

Known as Captain Moore, he was promoted to the rank of honorary colonel as part of his birthday celebrations. His birthday was also marked by a flypast by Spitfire and Hurricane from the RAF Battle of Britain Memorial Flight which made three passes of his house.

Former England captain, Michael Vaughan, virtually presented Colonel Moore with an England Test cap on BBC Breakfast. Calling him “the nation’s heartbeat”, Vaughan thanked Colonel Moore for his fundraising efforts and dubbed him “an honorary member of the England cricket team”. The cap was passed on in person by Colonel Moore’s grandson, Benji, who is in isolation with his grandfather and other family members.

Current England Test captain, Joe Root, has also been in touch to invite Colonel Moore to address his team in the dressing room ahead of a Test.

“The ECB would like to wish Captain Tom Moore the warmest of congratulations on his 100th birthday,” an ECB spokesperson said. “The Captain is a great supporter of Yorkshire and England cricket and it is an honour that he holds the team up in such high regard. The England cricket teams are in awe of him, his humility and the unprecedented fundraising he has achieved over the past few weeks.

“The England Test captain Joe Root has confirmed directly with Captain Moore and his family that he can address the team personally in the dressing room before a Test match. It would be one of greatest honours bestowed on the team to hear directly from him once we can return to some normality. We cannot wait for that day.”