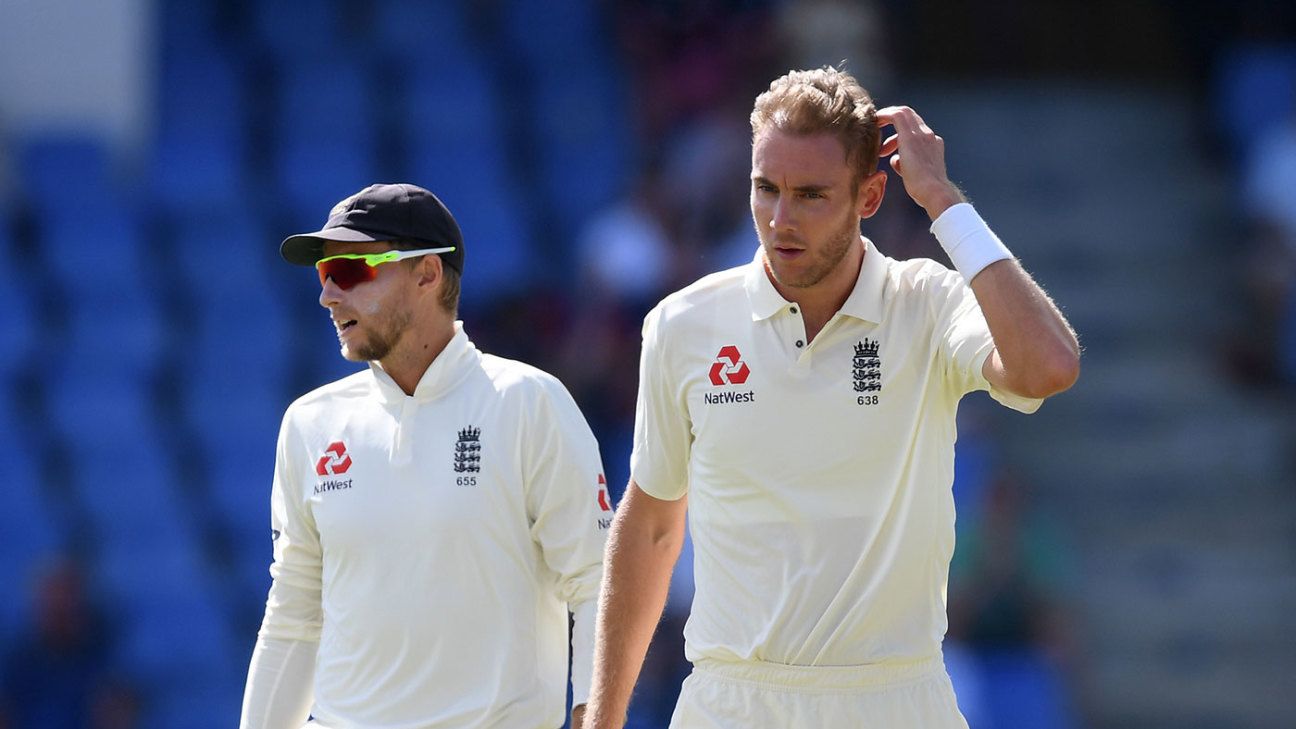 A target of 140 could be enough for England to level the series against West Indies, according to Stuart Broad. West Indies finished day two of the Antigua Test with a lead of 85 and four first-innings wickets in hand but, on a pitch offering variable bounce, Broad believes batting last could prove deeply problematic. As a consequence, he insisted his side are not out of the game.

But he knows that, if they are to win, they will have to bat far better than they have at any stage this series. He has therefore called on one of his batting team-mates to “play one of those knocks that goes down in history” to help England win the game and level the series.

“If we get 140 [ahead] on the board, I’d fancy our chances on the last day,” Broad said. “I look back to the Edgbaston Test against India where we defended under 200 [194] on a truer pitch than this.

“Scoreboard pressure means a lot and it means we’ll have to score more than we did in our first innings. But when I look at it as a team-mate and a fan, I look at the likes of Jonny Bairstow, Ben Stokes, Jos Buttler and Moeen Ali… any of these guys could take the game away from West Indies.

“We’ve got the talent in the batting line-up for someone to play one of those knocks that goes down in history. One of those guys could light this place up with a quick hundred and that would put us in a good position.

“We’ve still got a great shout in this Test match. The score looks away from us at the moment but you only need someone to get one really good score. As a bowler anything over 140 you’re really in the game. I’m looking forward to bowling on that pitch on day four.”

Broad, left out of the England team for three of their last four Tests, was the pick of the attack on the second day. While he finished with only three wickets, he suffered two dropped chances off his bowling and was part of an attack that saw a remarkable 103 plays-and-misses (in the estimation of the England team analyst, anyway) during the day. It left him both frustrated but also phlegmatic.

“I feel a bit lost as to how we only got six wickets,” he said. “I can’t think of any more plays-and-misses in any day of Test cricket I’ve played in.

“Does that prove we bowled a touch short? Potentially. But the information we had before the innings was that any full balls were easy to drive but anything back of a length meant anything could happen. We targeted that length.

He accepted, however, that England’s catching had to improve. While only one of the chances was what might be described as straightforward, he acknowledged that, when a side has bene bowled out for 187, they need to take every chance that comes their way. He also revealed that the second of the drops off his bowling took him to 97 dropped chances during his Test career.

“It’s an area we have to improve,” he said. “It’s been a running theme over the last couple of years that we’re putting down quite big chances. Against the best teams you have to take your chances and I bet we’re down there on the catching percentages list. It’s something we’re aware of and something we need to improve. But, as a bowler, all you can do is create the chances and, as a bowling unit, we feel we’re doing that.”