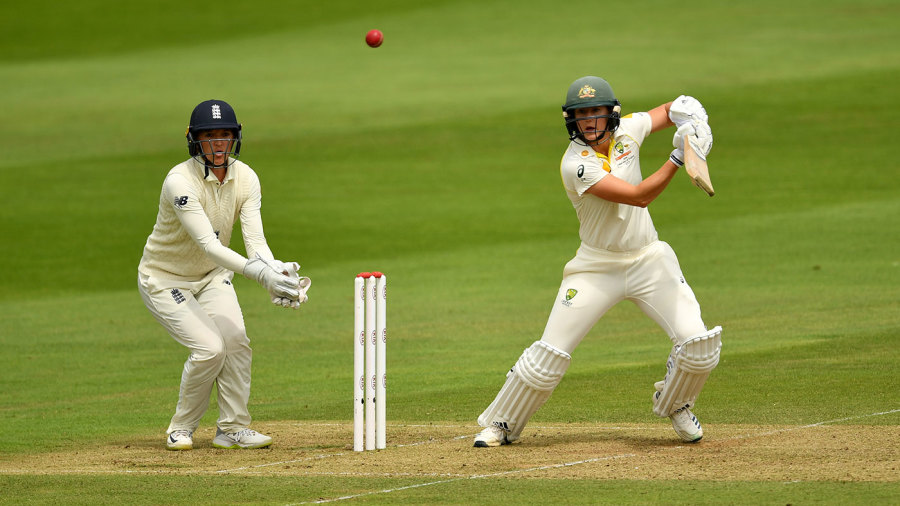 Is it too soon to say that Australia have retained the Ashes? Technically, yes, but such was the ease with which a succession of their batsmen mastered the opening day of the one-off Test in Taunton, it is already nigh on impossible to see how England can claim the 20 wickets required to win the match and stay in the series … unless, of course, the pitch starts ragging like a Ciderabad bad’un, in which case the 265 runs that Australia already have on the board will surely prove decisive.

Trailing 6-0 on points after losing all three of the recent ODIs, Heather Knight’s team needed nothing less than the four points available for this Test to keep their hopes alive going into next week’s T20s. And they appeared to have thrown in their lot with Taunton’s reputation as a spinner’s paradise, omitting their Test-specialist seamer Kate Cross for the left-arm debutant Kirstie Gordon, with Laura Marsh completing a three-prong spin attack.

But then Knight lost the toss, and the chance to bowl last on a used surface, and by the close of a one-sided first day, everything that could go wrong for England had gone wrong. Four of Australia’s top five posted half-centuries, including Ellyse Perry, who picked up the same indomitable form she had shown in her last Test innings – 213 not out at Bankstown in the 2017-18 Ashes – to reach the close on 84 not out, making a new record aggregate of 297 consecutive runs for a women’s Test batsman.

Furthermore, England’s focus and threat was fundamentally undermined by two key injuries in the course of the day – first when Sophie Ecclestone, their attack-leading left-arm spinner, was forced to leave the field midway through her third over, having bruised her shoulder badly while diving in vain for a catch in the outfield.

Though she returned to the attack after lunch, and bowled creditably in picking up the big wicket of Meg Lanning for 57, the moment had already been lost for England, who were pushed emphatically onto the defensive by an impressive morning onslaught from Alyssa Healy, whose 58 from 81 balls included 12 fours, four of which came in the space of nine balls from a lacklustre Anya Shrubsole. Her opening spell offered hooping swing but far too much width, and she was not called upon again until the 60th over, by which time the ‘roos had truly bolted.

England’s other big concern centred on the fitness of their one in-form batsman, Tammy Beaumont. Though she had barely flinched at short leg after being cracked a savage blow on the left thumb by a full-blooded Healy pull, she had left the field by the close of play and was due to go for an X-ray. Her absence at the top of the order would be incalculable: in the ODIs, Beaumont’s 114 from 115 balls in the second match at Leicester provided the team’s one moment of batting dominance. Aside from her, only Nat Sciver has so much as passed fifty in three innings.

For a side that so desperately needed to set the agenda, it was a passive performance from England throughout the first day. With two fifties in the ODIs, Healy was in the mood to dominate from the outset, and her effortless gap-finding left England with few answers, in spite of the odd hint of dramatic turn, including Ecclestone’s first delivery, which exploded past Healy’s off stump in the 12th over.

But having over-stretched at midwicket in a futile attempt to intercept another flicked four from Healy, Ecclestone was left in tears after jarring her shoulder as she hit the turf, and having served up a leg-stump half-tracker that was pulled ruthlessly for four, she left the field mid-over, handing the senior spin duties to Gordon – one of two England Test debutants alongside Amy Jones.

Gordon settled quickly in the circumstances – though not before Healy had cashed in on a brace of nervy full-tosses to race to a 61-ball fifty, her first in Tests. And, having found her pace and length for the conditions, Gordon struck a vital blow in the final ten minutes before lunch, sliding one past Healy’s back pad and into her stumps to pick up a notable maiden Test wicket in her sixth over.

Gordon’s day could and should have got even better in her very next over. Sensing an opportunity to turn the screw at 95 for 2 with two batsmen playing for the interval, Knight posted herself in Lanning’s eyeline at short cover, but then dropped a dolly of a checked drive, with Australia’s most accomplished cricketer on 26.

It was a grim moment for the skipper, and though Lanning did occasionally get bogged down by the spinners, she didn’t offer another sniff in pressing onto her half-century. On 57, however, Ecclestone – patched up in the dressing-room and restored to the attack, served up the ball of the day, a cunning slider that slipped under an attempted cut and into Lanning’s off stump.

But Perry by this stage was deep into her innings and utterly serene. Her commitment to the front foot in defence, but ability to rock back deep into her crease to attack, offered England no quarter as they probed in vain for a weakness. Their best hope, in fact, came at the other end, where the left-handed Rachael Haynes initially found the foot-holes hard to combat, at least until she took the initiative with her own footwork, dancing down the track to Gordon and lofting her with the spin over wide long-on for four.

By the close, England had surrendered all pretence of the initiative, as Perry closed in on her second Test century in a fourth-wicket stand of 105. It’s going to take something extraordinary to turn this game around, and England – on today’s subdued evidence – don’t look capable of producing it.