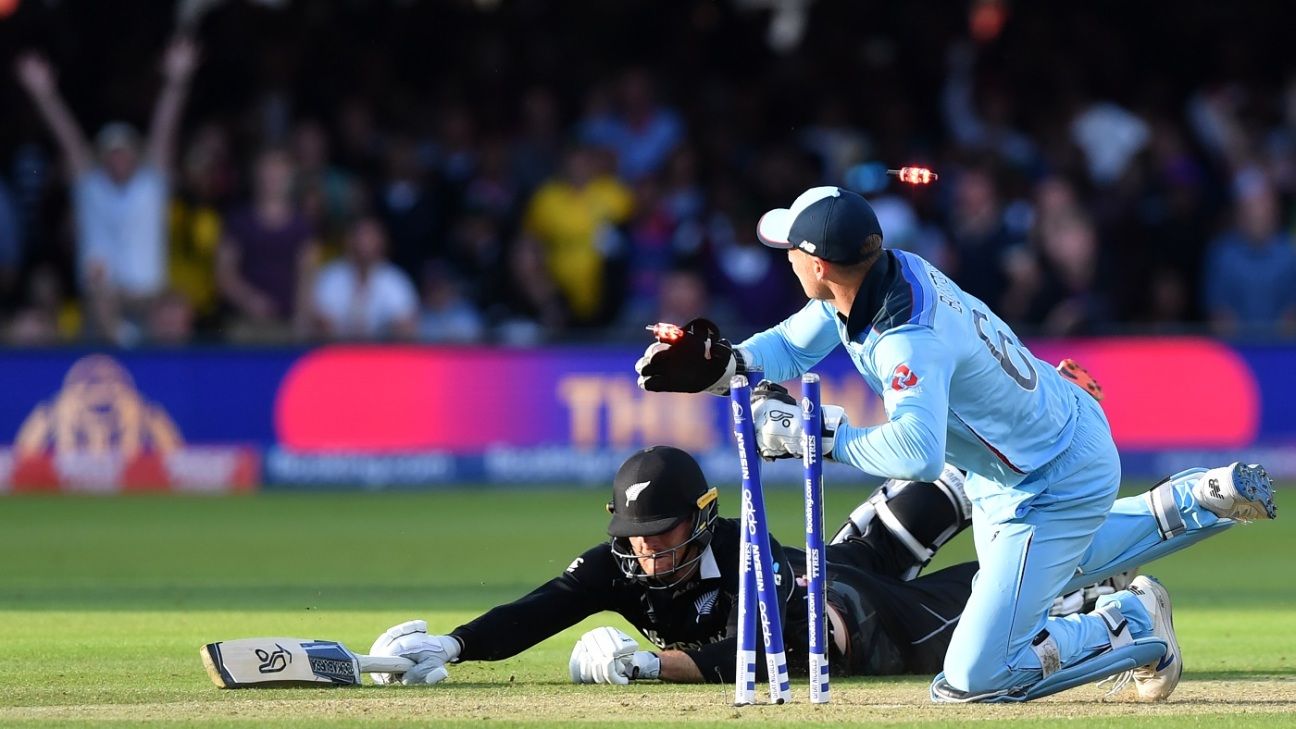 It was the first Super Over ever in ODI cricket, and it had to be – just had to be – in the 2019 World Cup final. At Lord’s, of all places. A low-scoring contest, with absolutely nothing to separate the two teams on the field or on the scoreboard. It ended 241 for 8 v 241 all out. Fascinatingly, even the Super Over ended with the two teams on even terms, except that England had hit more boundaries (fours and sixes) in the game – 26 to 17 (including in the Super Over) – and that gave them the title.

Here’s how ESPNcricinfo recorded the drama on our ball-by-ball commentary.

0.1: Boult to Stokes, 3 runs, full slower one on off stump, clears his front leg and slogs but doesn’t get hold of it. Loops in the air between short third man and backward point, and lands out of reach of both. They can run three, but it leaves Stokes winded.

0.2: Boult to Buttler, 1 run, full on middle stump, swiped away along the ground to deep square leg. Didn’t look like a particularly threatening ball, neither fast nor an obvious change of pace. Still, just a single.

0.3: Boult to Stokes, FOUR runs, full again, a bit of late inswing towards middle and leg, and that’s a super shot from Stokes! Gets down low and sweeps with a roll of his wrists to beat deep midwicket throwing himself to his left on the boundary.

0.4: Boult to Stokes, 1 run, full-toss wide of off, was looking for the wide yorker. Sliced to the fielder at backward point, Ferguson.

0.5: Boult to Buttler, 2 runs, in the blockhole on off stump, makes a bit of room and jabs it away towards sweeper cover, where Nicholls sees it late and is slow coming in to attack the ball. That means they can run two.

Looks like Archer will bowl England’s over. He’s sitting by the edge of the boundary, ball in hand.

0.6: Boult to Buttler, FOUR runs, Buttler finishes with a boundary, and England end their Super Over with 15. Looks for the yorker again, but it’s a low full-toss, and he whips it away firmly to the left of deep square leg

0.1 (wide): Archer to Neesham, 1 wide, looks for the wide yorker, ends up bowling a wide. Marginal, just beyond the tramline, but beyond it is, and Neesham doesn’t even play at it.

0.1: Archer to Neesham, 2 runs, in the blockhole close to off stump, stabbed down towards long-off, rolls slowly through the outfield and they can take two.

0.3: Archer to Neesham, 2 runs, fullish outside off, swiped away to the left of deep midwicket, and Jason Roy, swooping down on the ball, gets up too early to throw, and ends up fumbling, allowing an easy second. New Zealand need five off three!

0.4: Archer to Neesham, 2 runs, full, pretty close to the blockhole, clipped to the right of deep midwicket this time, and they run two again! The throw at the non-striker’s end is good, but Guptill beats it easy.

Williamson’s padded up. Of course he is.

0.5: Archer to Neesham, 1 run, digs it in short, gets it up to Neesham’s front shoulder. Swings too early through the pull, and he only manages an inside-edge into his body. They sneak the single. Guptill is on strike.

Two of one ball. Guptill gets just the one ball. What a final. What a crazy, beautiful final.

0.6: Archer to Guptill, 1 run, OUT, full, angling into the pads, and he clips it towards deep midwicket, who has to run in off the rope, but not too far. It’s a risky second, but they have to take it to win it. A tie isn’t good enough, given the boundary count. The throw’s at the keeper’s end, and Buttler has to take it in front of the stumps. Guptill dives, Buttler dives to break the wicket. It isn’t a photo finish. Guptill is well short. England have won the 2019 World Cup. Can’t say New Zealand have lost, though.