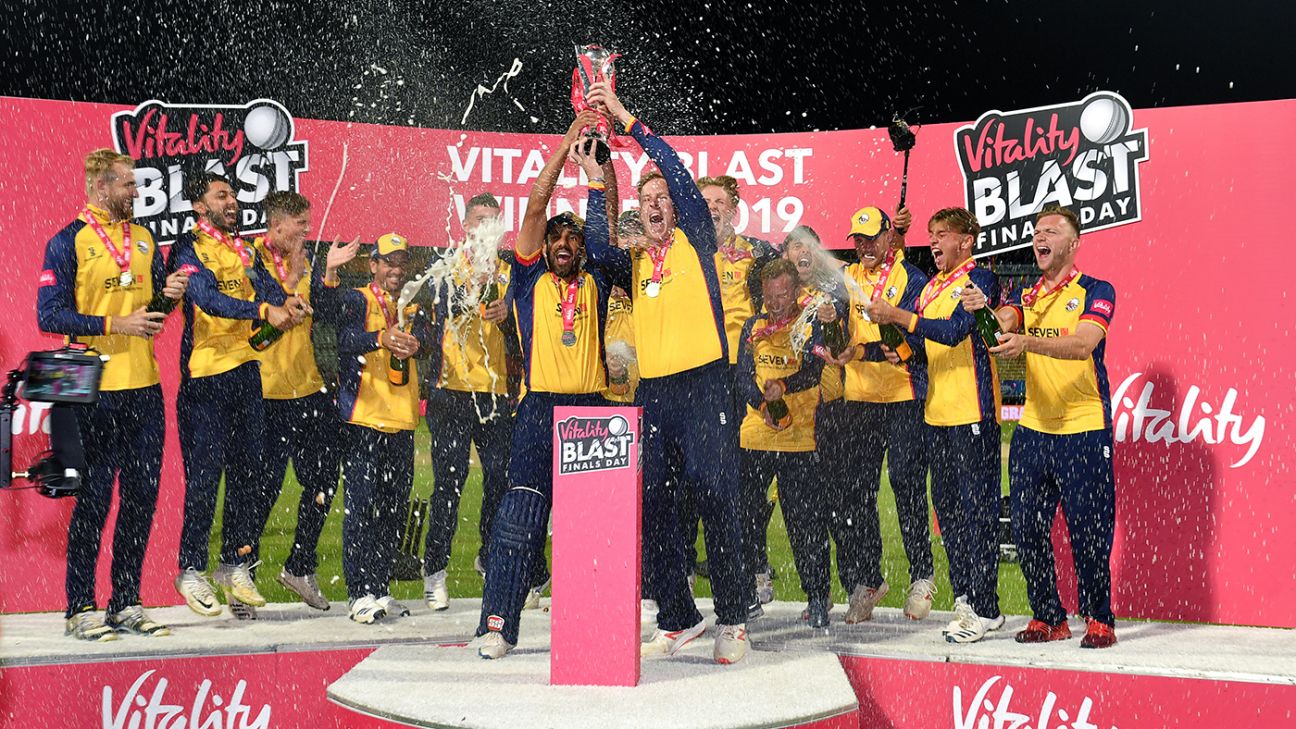 The ECB has denied suggestions that it has attempted to play down the success of the T20 Blast.

Several counties were set to celebrate the competition’s ticket sales exceeding one million for the first time in 2019 when an apparent change to the reporting system saw the figure fall well short.

Ten days later, however, the ECB produced another report with the ‘total ground sales’ metric removed. They also did not add on the figures for the quarter-finals (which were 22,368) or finals day (which was 26,404). Had they been included, the sales figures would have broken the million mark for the first time. Instead, they only quoted the overall attendance – which is the figure adjusted to subtract sales for games subsequently abandoned due to poor weather – in the group stages.

An ECB spokesperson said the report was “consistent with how we reported numbers last year” and suggested “attendance is generally the standard [metric measured] in sport.” They also pointed out that, as the competition wore on, the overall attendance figure was deemed more accurate as the ‘total ground sales’ figure sometimes includes an estimate of the number of county members likely to attend. The ECB’s official figure for overall attendance at the Blast in 2019 – a figure that does not include tickets sold at rained-off games – is 920,000.

The reason for the discrepancy between the reports – and the reason why the ‘total ground sales’ metric was removed – remains unexplained. In a media release at the end of the season, the ECB quoted the number of tickets sold for Test cricket before Christmas 2018 without feeling the need to subtract the number subsequently refunded due to poor weather.

While it might seem odd that a governing body would seek to play down the success of one of its own competitions, some suggest that officials at the ECB are nervous that the perceived success of The Blast – the domestic T20 competition – might negate the need for a new competition, The Hundred, played utilising a new format of the game.

ALSO READ: The Hundred: It is coming, and there’s no going back from here

Any suggestion that the Blast’s success may have been downplayed will also do nothing to assuage the fears of those who fear the two competitions – The Blast and The Hundred – are effectively in competition with one another for spectator attention, sponsor revenue and broadcast interest.

“The Blast saw average attendances increase by 15 percent this year,” an ECB spokesperson said. “The ECB is committed to investing more than ever into the tournament next season to help continue its growth while dove-tailing with our other men’s and women’s fixtures to entertain core cricket fans and attract new fans to our game.”

The news emerges at a time when concerns are growing over likely ticket sales for The Hundred. ESPNcricinfo understands that, while the ECB is targeting 80 percent capacity at Hundred matches, their financial projections are based on the more realistic figures of 60 percent capacity. Some hosting venues fear they will struggle to reach 50 percent.

The problem stems, in part, from the scheduling of The Hundred. While the competition has been allocated the prime weeks of the summer, the decision to stage matches every day of the week – ostensibly to allow broadcasters an opportunity to fill their schedules – is creating challenges for the venues. Sales for matches early in the week – on Monday and Tuesday nights, in particular – are thought likely to prove most problematic. By contrast, most counties are reporting satisfaction with their Blast fixture schedule in 2020. The initial allocation of tickets for Finals Day has already sold out.

Plans to put tickets for The Hundred on sale this month have been delayed so it doesn’t clash with attempts to sell next year’s international fixtures. Hundred tickets may now not go on sale until close to the start of the 2020 domestic season.

But, ESPNcricinfo understands, their costs exclude the £1.3million fee – £23.4million overall – guaranteed to each county. With those costs included, the competition is not currently projected to make a profit in its first five years, though it could break even in year five. To be fair to the ECB, T20 leagues around the world have struggled to achieve profitability in their first few years, with even the IPL taking until 2018 – ten years after its inception – to deliver profits to all its teams.