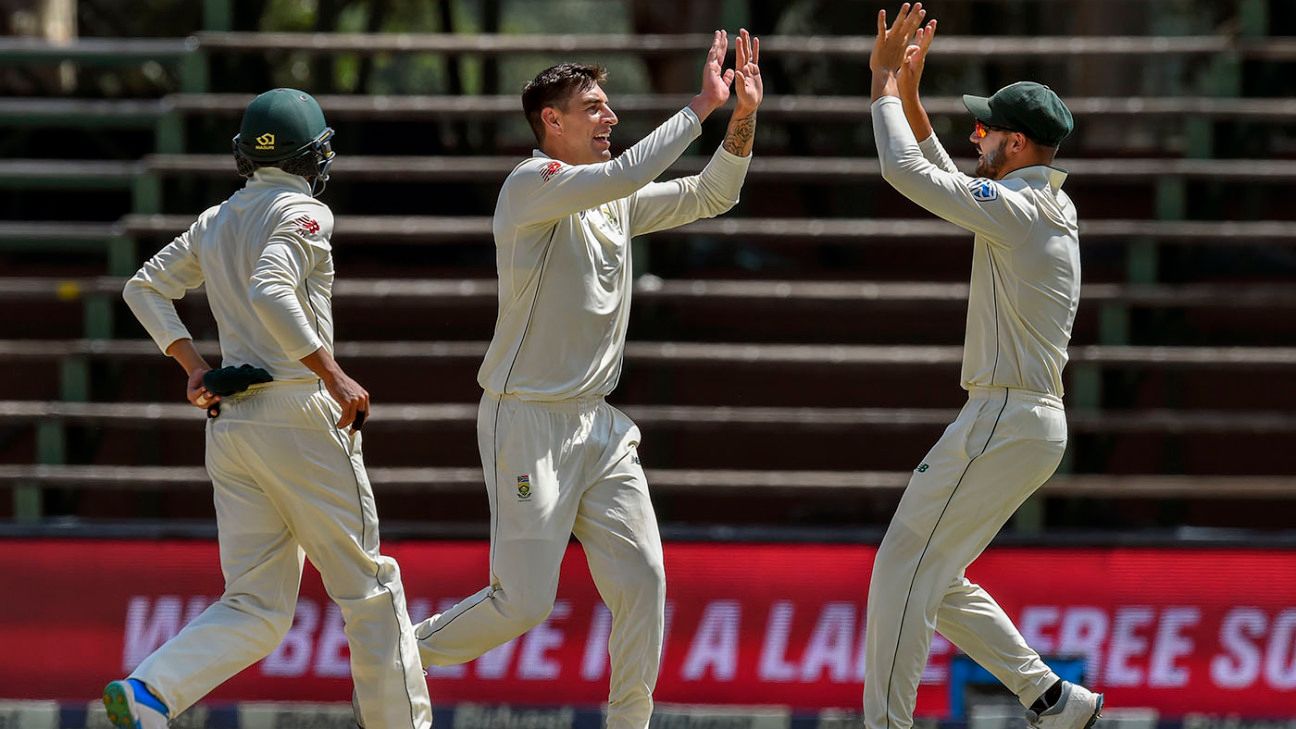 South Africa demonstrated the ruthless instinct that has brought them seven straight series win at home, rounding up the seven Pakistan wickets they needed before lunch on day four at the Wanderers. Duanne Olivier made the early inroads, taking his match tally to 8 for 125, before Kagiso Rabada scythed through the tail to help confirm a 3-0 series whitewash.

Pakistan did manage to breach the 200-mark for the only the second time in six innings, but that was small consolation as they fell to another heavy defeat. Asad Shafiq top-scored with 65 from 71 and there was some devil-may-care hitting lower down, though little to suggest the tourists ever harboured serious hopes of chasing 381 for a consolation victory.

While efforts of the top order on the third evening declared that Pakistan were not willing to run up the white flag in their last act of the series, it did not take long for them to buckle once play had resumed. For the second time in the match, Olivier found himself on a hat-trick and when Shafiq’s punchy innings was ended by Vernon Philander a few overs later, the bulk of South Africa’s hard work had been done.

Babar Azam is one player who has left a mark on South Africa – just ask Dale Steyn – but he could do little about the Olivier throat ball he received in the third over of the morning, a pawing, snorting delivery worthy of the Bullring that flicked the bottom glove on its way through. Sarfraz Ahmed was then bluffed out first ball, hanging back for the short one only for Olivier to hit the top of off stump as the bat came belatedly into line.

There was a second fifty of the series for Shafiq – although 185 runs at 31.00 was an underwhelming return for one of Pakistan’s senior batsmen – and a few more retaliatory boundaries before he walked down at Philander and diverted tamely to second slip.

With Pakistan now 179 for 6 little more than half an hour into the morning session, and the target a hazy dot on the Highveld horizon, the rest was mostly formality. Shadab Khan had negotiated Olivier’s hat-trick delivery by sending a compact drive back down the ground for four, and he added 25 in partnership with Faheem Ashraf, before the latter’s fun was ended by an excellent diving catch at gully from Aiden Markram.

The same combination of Markram and Rabada removed Mohammad Amir two overs later, bat dangled apologetically in the channel, and although Hasan Ali made merry while hitting two fours and a six in 22 of 14, he soon sent up a steepling caught-and-bowled chance for Rabada to swallow.

Shadab demonstrated a correct technique and some enterprising strokes, hitting seven fours to move within sight of a fourth Test fifty. However, having added 31 for the last wicket with Mohammad Abbas, forcing the lunch interval to be pushed back, an impetuous call by the No. 11 ended Pakistan’s resistance via a run-out.