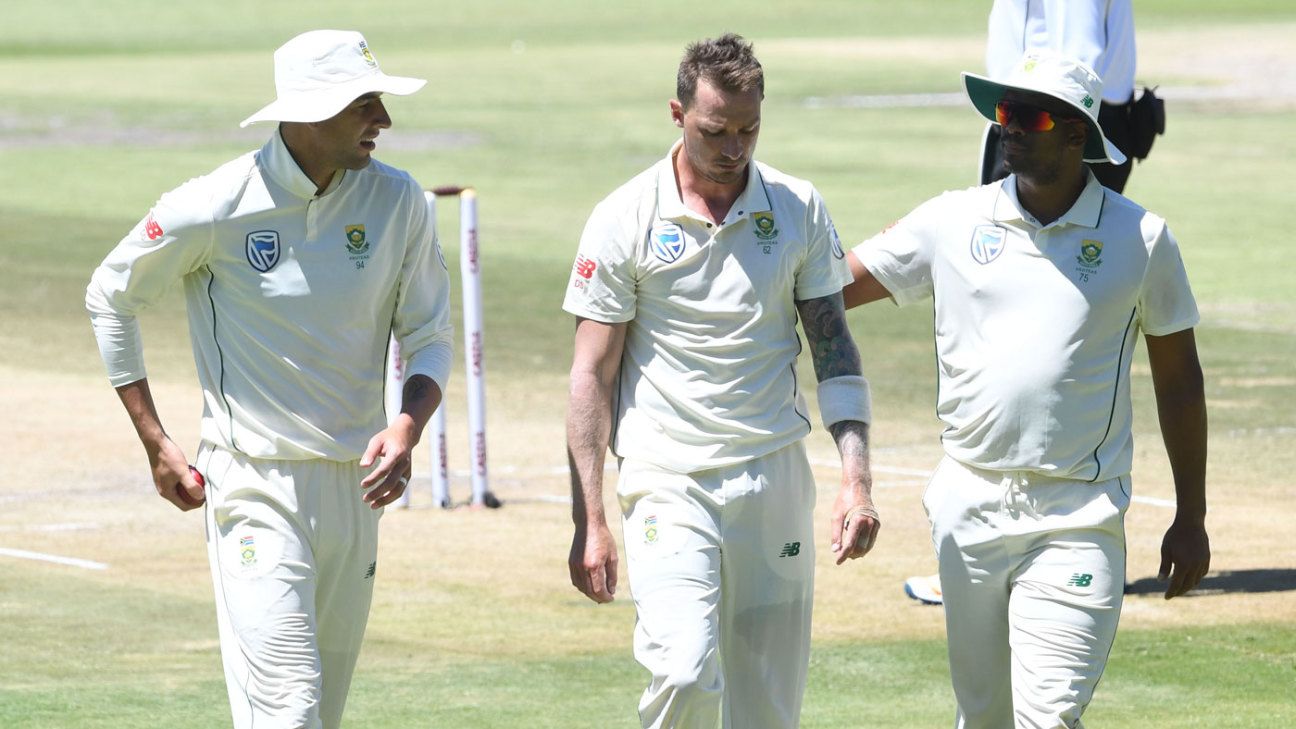 South Africa created more than enough chances to have bowled out Pakistan on the second morning at the Wanderers. Instead, thanks to a combination of bad catching, good fortune and no little fortitude, especially from Imam-ul-Haq but also the nightwatchman Mohammad Abbas, Pakistan reached the interval five down but still in the fight.

Aside from the poor fielding, there was also a concern for South Africa as Dale Steyn departed the field clutching the right shoulder that has caused him so much anguish over the last two years. The frustrations of seeing two chances missed off his bowling would be minimal next to the possibility of his injury problems resurfacing – Steyn angrily punched the hoarding on the tunnel on his way up to the dressing room – but he was able to return for another short burst with the ball.

It turned into an expensive spell, struck for five boundaries across two overs by Babar Azam, who raced to 41 from 39 balls as he continued to get the better of Steyn in their personal duel.

Imam, who was dropped on 13 and 33, was Pakistan’s anchor for most of the session, a picture of calm stoicism amid the chaos of South Africa’s efforts in the first hour. He produced only the second double-figure score in his team’s first innings of a Test, dealing mainly in nudges off the pads before finally succumbing to Vernon Philander in the penultimate over before lunch.

His partnership with Abbas, who had walked out with Pakistan on 6 for 2 the previous evening, was ultimately worth 47, though its value seemed even greater as South Africa squandered numerous opportunities to separate them. Abbas made 11 from 51 deliveries, dutifully getting into line as Steyn repeatedly rasped the ball past his outside edge, before Duanne Olivier finally benefited from a catch being held in the cordon.

Olivier made it two in four balls, when Asad Shafiq attempted to evade a short delivery but only succeeded in deflecting it through to Quinton de Kock off the back of his bat. With Pakistan 53 for 4, there was still the chance for South Africa to wrest control, though they had been their own worst enemies during the opening exchanges.

If de Kock could be forgiven for missing a sharp leg-side stumping off Imam when standing up to Vernon Philander, there was little mitigation for Temba Bavuma when a thick edge from Abbas flew straight to him at gully. The catch was at shin height and he got both hands in position, only for the ball to inexplicably pop out.

Worse was to follow in the next over, as Theunis de Bruyn, diving across from third slip, managed to interfere with a regulation catch to Dean Elgar at second. Instead of swallowing the chance, Elgar wore the ball on the chest. Steyn was the bowler, and he should also have removed Abbas shortly after, only for de Kock to shell the chance going one-handed to his right, with the ball seemingly headed for Hashim Amla at first slip.

The introduction of Kagiso Rabada allowed Imam to collect two leg-side fours, one attempted yorker timed superbly through midwicket. But Rabada, too, could have removed Imam, when de Kock again could only get fingertips on a low catch to his left. With Imam ball-watching and Abbas halfway down the pitch looking for a run, Rabada was then off target with a shy at the non-striker’s after collecting the throw from Elgar (who had picked the wrong end to target).

Babar survived a crushing blow to the ribs from an Olivier delivery that kicked viciously before he had scored, and edged just wide of gully on 9, but he produced a number of sparkling strokes to help keep Pakistan above water.