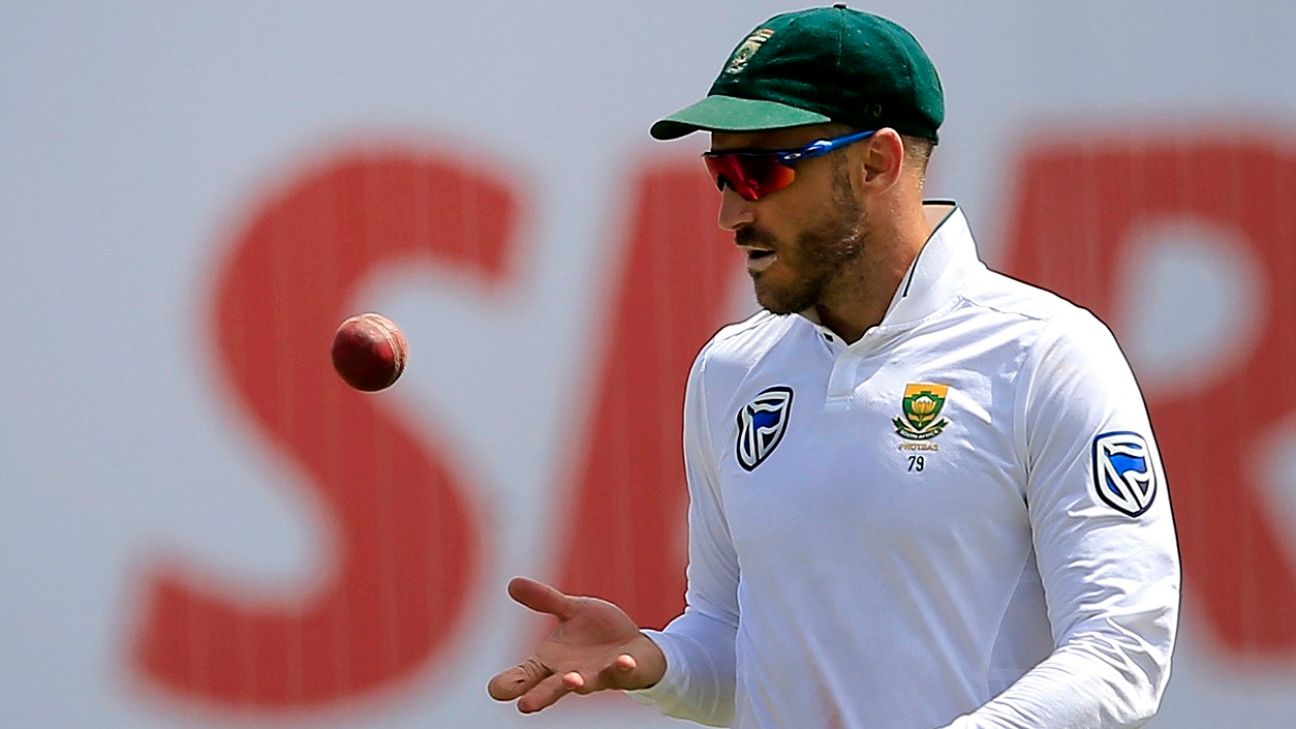 South Africa’s brains trust has been forced to battle with the balance conundrum – even if it’s a happy one – ahead of the Durban Test. Given Kingsmead’s recent history, and the fact that it is Keshav Maharaj’s home venue, captain Faf du Plessis appeared unwilling to hedge his bets on an either/or decision on Maharaj. It is likely, however, that the left-arm spinner, who missed all three Tests against Pakistan, should be back in the frame.

“Our thinking is moving towards a team that has not only the option of either four seamers or a spinner,” du Plessis said. “We would like to have both options, and that only really comes into play when you have an allrounder at No. 7. That’s our thinking moving forward, though whether it will happen tomorrow (Wednesday) I’m not sure yet.

“If you look at a general Durban or Kingsmead wicket, it allows for a spinner. In a perfect world, when you’re playing against a subcontinent team, with the firepower we have in our seam attack, you’d like to have the option of possibly going in with four seamers, but the history tells me that you would need to go in with a spinner here.”

Left out of the Test team and not currently part of South Africa’s white ball plans, Maharaj’s confidence may have been dented a little. His numbers in domestic four-Day cricket have also dipped slightly. While South Africa’s pace bowlers repeatedly ran through Pakistan, Maharaj picked up 19 wickets across seven games in the season for Dolphins at 42.21, and 2 for 217 on his last outing against Cape Cobras.

“Obviously you want to try and expose them with your pace, so that’s been harsh on Kesh because he’s done nothing wrong,” du Plessis said. “He’s actually bowling really well. We always try to have him in the starting XI because he’s a world-class spinner. The thinking is for the Test team to move towards having both your three best seamers whoever they will be at that time on form, and then also your spinner. That’s the plan for the Test team, but whether that will happen tomorrow, that still needs to be decided.”

Conditions will be one of the deciding factors in South Africa’s eventual starting XI, and what is expected to be a slow track could blunt the effectiveness of Duanne Olivier’s short-ball tactics, and bring a spinner like Maharaj into the game as an attacking option.

“They’ve been struggling with pace the last season and a half,” du Plessis said of Kingsmead’s grounds curation. “I mean you saw the one dayer, it was really slow when we played here. So they prepared another pitch with a little more grass on it, hoping that it would have a little more pace. We hope that’s the case, but the general last season and a half tells me that it’s not going to have a lot of pace. So, expecting a little bit of movement, but it will be slow.”

Alongside the option of an attack built around three seamers and a spinner, South Africa might also look to allrounder as their fourth seam option in the No. 7 position. With Sri Lanka missing four of their best fast bowlers, du Plessis even went as far as to consider a five-strong bowling attack for his team.

“If you’re playing a team with a lot of pace in their armoury, then going in a batter light would be a high risk because your tail will struggle to hang around when there’s pace around. So because there’s not massive pace in the Sri Lankan team, it is something you can speak about. I don’t think we’ll consider a five bowler attack against someone that has got express pace, but we are considering that option because there are a lot of medium pacers playing in their team, and obviously losing their spearhead in the spin department in Rangana Herath, there’s a lot of experience missing there.”

While Maharaj’s return to the starting XI will mean South Africa have to tinker with their side to find the right balance, du Plessis said that the challenge was a good one for his team.

“It’s good for us to have options,” he said. “It’s the same thing with the one-day team. I feel like the last while there’s been a lot more options in selecting both the Test and ODI teams. It’s good. It keeps everyone on their toes. Dale is Dale Steyn, he’s an amazing bowler. But also now you’ve got Duanne bowling really well and taking 25 wickets, and that makes selection a lot harder.

“If it was a normal case in point, you’d say there’s no comparison, Dale Steyn is Dale Steyn. But now Duanne has bowled so well you have to look at what’s best for your team at the moment, And if you can’t make a decision, if you feel like both of them are going to add so much value to your team, the other side of the coin is leaving an allrounder or a batter out.”

Whatever their final selection, South Africa won’t be taking a Sri Lankan team reeling from their defeat in Australia and off-field distractions lightly.

“They’ve been having a tough time in Australia, and there’s been a lot of things happening away from their team, so I suppose it’s not ideal for them. But I’ll always respect opposition that we play against, whether it’s a Sri Lankan team that’s lost, or whether we’re playing Ireland or Afghanistan. Our preparation doesn’t change.”