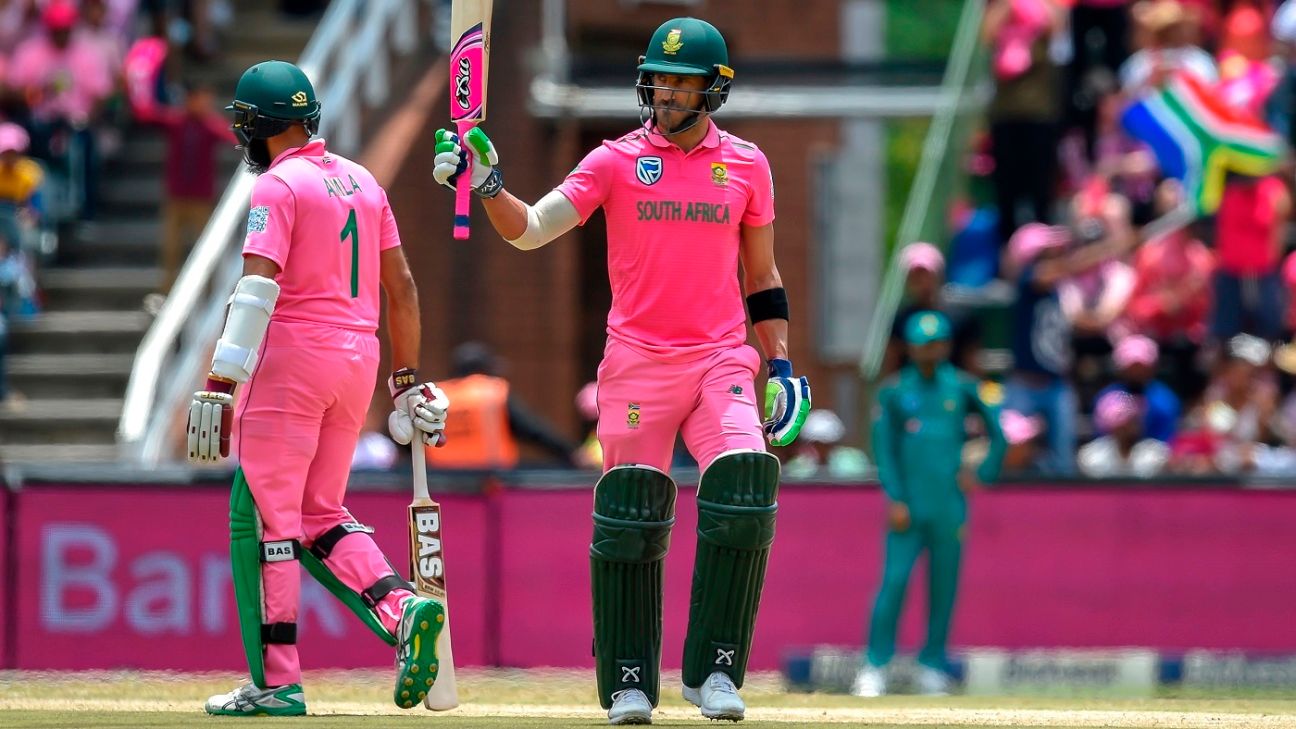 South Africa will be testing more than just their all-round options and bowling combinations in the decider of their series against Pakistan on Wednesday. They’ll also be testing their big-match temperament and gaining vital experience of how to deal with must-win games – experience that could be vital in overcoming the knockout anxiety that has haunted previous World Cup campaigns.

“It sounds very cliché, but for me it’s about finding out how we play big games better,” captain Faf du Plessis said. “And that’s by not making it anything bigger than it already is. Obviously it’s already a big game, but when we do make it a big thing we possibly don’t bring the best out of ourselves as a team.

“So it’s about freeing up the guys to go out there and express themselves in whatever way they want to. Not to see it as a huge game where they need to play differently. It’s really just letting them go.”

Du Plessis was speaking off the cuff and unrehearsed. He didn’t even know the World Cup trophy, which is on a grand tour ahead of the event had just landed in South Africa and was at Newlands this afternoon until it was brought into the press conference room. But his words struck upon an undeniable feature of South Africa’s performances in global tournaments, and how they might be able to put things right. Recently, the signs have been positive, and against Australia in November, South Africa steeled themselves to win the series decider in Hobart by 40 runs.

“In the last two years we’ve played really well in these sorts of scenarios,” du Plessis said. “We want to test ourselves and every time when it’s a series decider, we as a team have stepped up. So at least it is moving forward in that direction. We are winning those games, which is a huge plus point for me. We’ll hopefully do the same against a very strong team tomorrow.”

The favourites tag hasn’t quite settled upon South Africa as hosts against Pakistan, who have shown their mettle by squaring the series 2-2 in trying circumstances. South Africa won’t be favourites at the World Cup either – that tag must surely belong to England or India – and du Plessis suggested that his team are happy to be freed of the weight of expectation

“We’re certainly going with a little less pressure on us as a team in terms of going there with the expectations of winning it,” he said. “I think it’s pretty clear that England and India are probably the two favourites. So it’s a nice way for us to go there, with the expectation of just going there and giving it a good shot, and whatever happens happens.

“The only difference really when it comes to ICC tournaments and World Cups and stuff like that is just the expectation. Not just on South Africa but on all countries. But especially if you’re a South African team travelling to a World Cup or ICC event, that’s when the expectations start. The chat in the media starts. Even chat from opposition. So those are the things that we speak to younger players about, what to expect. Making them ready for something that will probably be the first time that they go through those feelings from a mental point of view.

“So it’s really important that as a team we make sure we’re as relaxed and free as possible. I suppose we’ve gone to tournaments in the past where we’ve felt like we’ve had the strongest team on paper, but you don’t win games of cricket on paper. And that’s the nice thing for us now, when opposition look at us, we’re not the strongest team on paper. I like the fact that we’re going with that mental attitude towards the World Cup.”

If South Africa can tune out the media and the opposition, half the battle will be won. And they won’t have any undue pressure from their leadership either. “For me as captain it’s really important to make sure that players don’t feel that they have to be supermen to try and win that tournament,” du Plessis said. “They just have to go there and try and be the best they can be. I’ve felt in the past we’ve been guilty of that, where on the day you feel you have to do something special or something remarkable. And that expectation can carry a lot of weight on your shoulders. My chats with the team have been about trying to get rid of that.”

Du Plessis didn’t mention the C-word, but there was also no shying away from the issues that South Africa have grappled with in the past. Indeed, he has personal experience of World Cup heartbreaks from the last two tournaments and felt it was not about trying to run or hide from the past, but about how to deal with it.

“I can speak from a personal reference, going in 2011 to my first tournament, you go in as a youngster not knowing about what’s happened before you. But as soon as you get to that stage, you certainly get to know about it then. When you talk to the media everyday that’s all people speak about, or when you play against opposition they’ll bring it up. That does happen. Whether you’re young or old, when you get to the tournament, that’s a fact. The thing now is making players aware of it and giving them ways of understanding it, dealing with it, perhaps even mentally preparing for it, so when they do get there it’s not a surprise for them.

“We’ve played some really good cricket in tournaments in the past, but we’ve always had little moments in the game where pressure got the best of us. For me, it’s about how do you fix that? How do you deal with it? How do you cope with it? And I hope that by talking to players and giving them a ‘how’ of getting out of it, perhaps when we get there they’ll do that a little better.”

The series decider at Newlands is the first dress rehearsal for Vision 2019, du Plessis’ shared project with coach Ottis Gibson that has as its primary focus the World Cup. Speaking with the prize of that tournament glittering on a table behind him, one might have forgiven du Plessis a touch of superstitious reverence. “I’m not superstitious,” he insisted, turning around to prove his calmness by touching the trophy. “It’s great to see it.”

It’s just a trophy. The series decider against Pakistan is just a game of cricket. And that’s all South Africa will be doing at the World Cup, too. If he and his team can remain as cool, calm and collected during that tournament, in just over five months du Plessis could have his hands on the trophy once again.