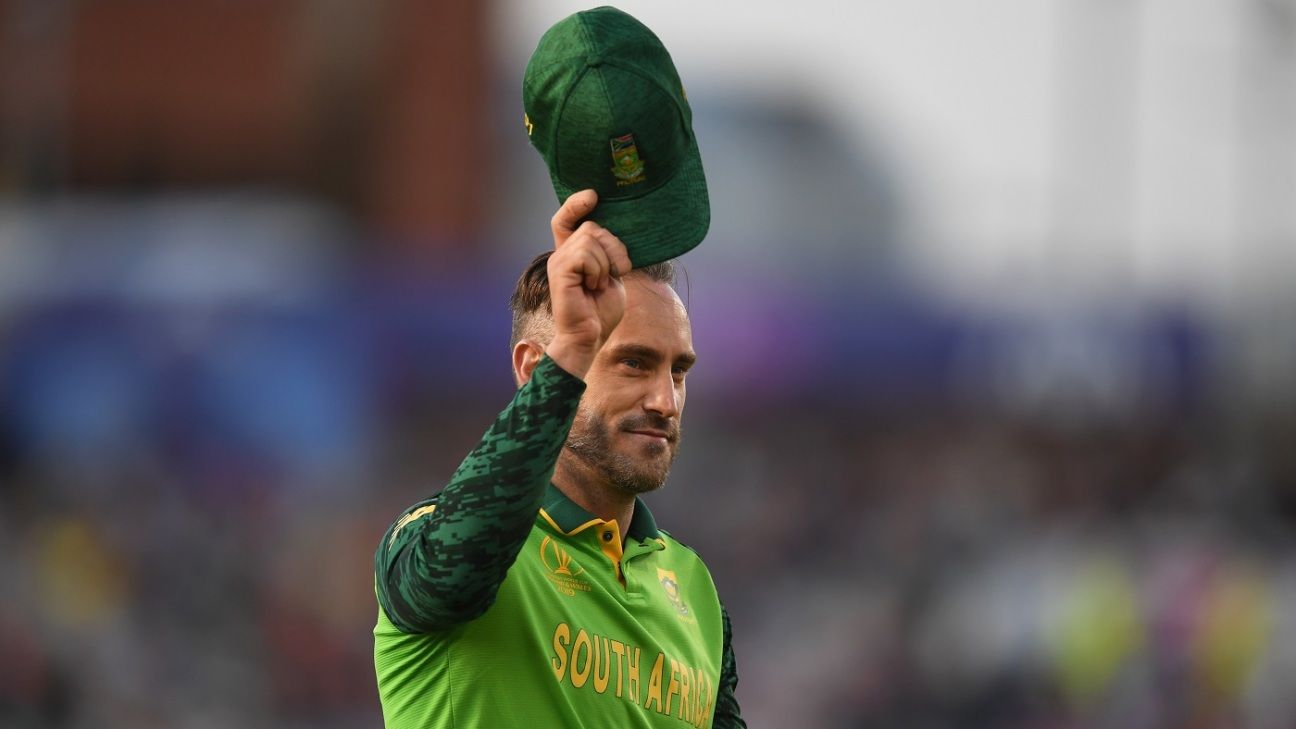 Faf du Plessis has hinted he would like to continue as South Africa captain until the T20 World Cup in Australia next year.

While du Plessis continued to rule out the suggestion that he would retire from international cricket after the current World Cup he expressed a belief that his experience could help younger players – and perhaps a new captain – through a transitional period.

Imran Tahir and JP Duminy have already confirmed their retirement from ODI cricket, while it seems there is little chance that du Plessis (who is 35 in a few days) and Hashim Amla (who is 36) will be viable contenders by the time the next 50-over World Cup comes round in 2023.

But du Plessis, in particular, feels he is batting as well as ever – he made a century as South Africa defeated Australia at Old Trafford on Saturday to take his tournament tally to 387 runs at 64.50 – and suggested he might be interested in playing until the T20 World Cup – which is scheduled for October and November 2020 – to help younger players “grow and mature” into their roles.

Asked whether he had just played his final ODI innings, du Plessis replied: “I don’t know right now. I love playing for South Africa, but the big thing for me is to have purpose as a leader.

“I don’t want to just play games for the sake of playing games. When I play I want to make sure I’m motivated to keep doing it and right now sitting here I am still, very, very motivated.

“I decided way before this World Cup that I was going to play, win or lose, good or bad, and then after the tournament sit down and relook at what how hungry I am, how motivated, and what are Cricket South Africa’s plans. Those things will happen over the next three or four weeks. But I really enjoyed this game, so it will be hard to walk away from that feeling and playing international cricket. The decision will probably be decided in front of a fireplace with a glass of red wine in my hand.”

Although du Plessis accepted that it would, “in a perfect world,” make sense for South Africa to start building a new ODI team for the 2023 tournament now, he urged caution over blooding too many inexperienced players at the same time.

“If your plan is to start introducing some young players, I think you need to have some experience around those players because they learn very quickly from those [more experienced] guys,” he said. “From a leadership point of view, whoever is going to be the next captain, I think there is still a lot of value of playing with me for a year or two to make sure that they can learn and grow and mature into what will be the next World Cup.

“I think to completely cut off everything is not necessary. I think probably four or five players make space in the team and then you start phasing it out by getting players ready for four years’ time.

“Initially the plan was for me and [the coach] Ottis Gibson to go to the T20 World Cup so that is in a year’s time. For both of us, the plan was not to look past that. Then Cricket South Africa may change the coach and captain probably after that tournament and still have two-and-a-half to three years before the World Cup. That’s a possibility.”