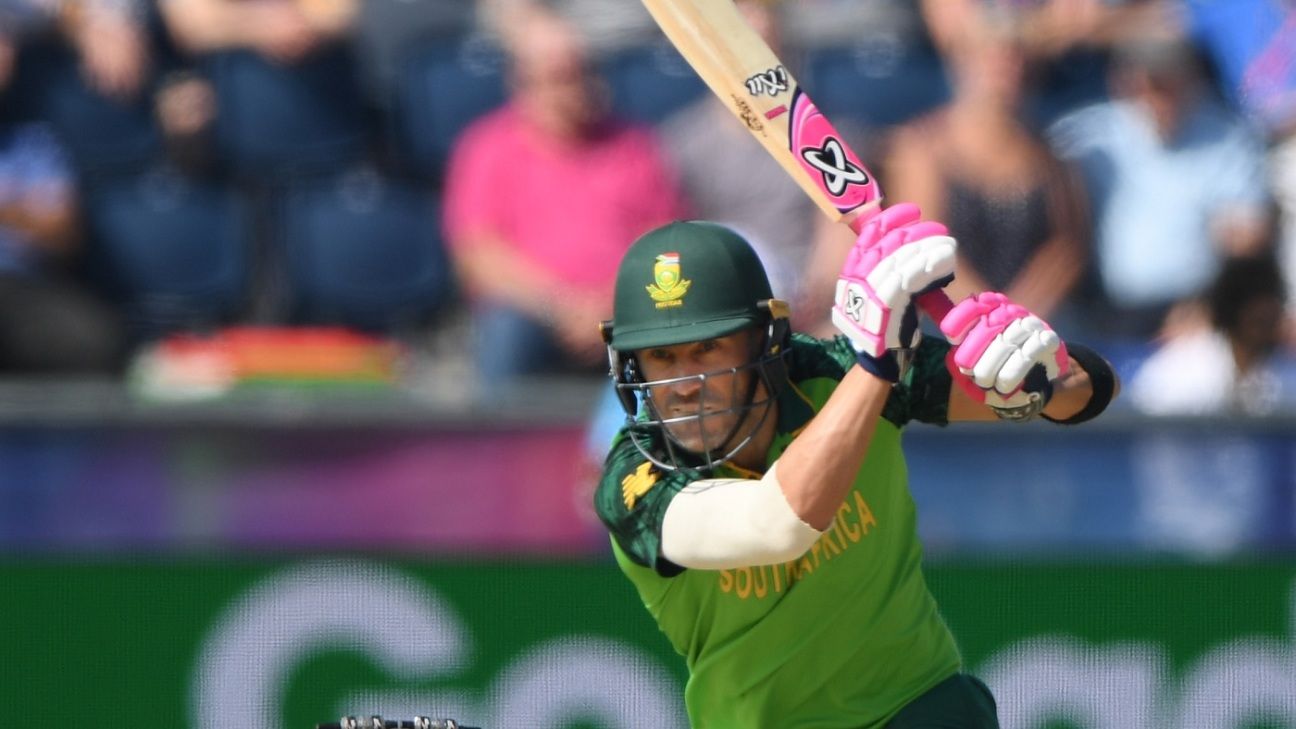 South Africa captain Faf du Plessis believes it would be “amazing” if the ICC was to act on Jason Holder’s suggestion of introducing a minimum wage into international cricket. However, du Plessis also conceded it was “a long way from happening”, and said that he would be taking time after the World Cup to weigh up his own future as a South Africa player.

Holder, the West Indies captain, made the suggestion in February following Duanne Olivier’s decision to sign a Kolpak deal Yorkshire. He warned that unless “something is properly done to keep players a bit more grounded financially” it could become hard to maintain the quality of international cricket, and he revealed he had held discussions with the Federation of International Cricketers’ Associations (FICA) on the subject.

Du Plessis was positive about the possibility of such an initiative, with the issue of losing players to the T20 circuit or Kolpak deals remaining an “area of big concern” for CSA. But in accepting that South Africa could lose more players once the tournament has ended, he admitted he had not yet come to a decision about his own career. JP Duminy and Imran Tahir have already announced plans to retire from international cricket following South Africa’s final World Cup game on Saturday.

“There are almost two groups of players when it comes to South African cricketers,” he said. “There’s your Test players – and for them the Kolpak option is the dangling carrot – and there are your white-ball specialists, where the T20 circuit around the world [is the carrot]. Both of those areas are a big concern for cricketers in South Africa.

“Looking at the one-day side, your players that will move on from the Proteas would potentially move on to the T20 circuit, maybe bar one or two, but that is generally where the opportunities lie for the white-ball players. I think, naturally, with some of the guys finishing, they’ll do that. That will become the biggest issue for us to try and stay away from for all players. And that’s including myself.

“My plan was to commit fully to the World Cup and not even think of anything else further than the World Cup because I didn’t want my mind to start drifting into the future. I wanted to be completely present in this World Cup.

“Right now is possibly not the best time to be making decisions because you are disappointed – I won’t say emotional – but you don’t want to be in this mode when you are making career decisions. So, for me, it will be a case of taking some time off and reflecting on what the future looks like for me; what’s my purpose going forward; is it still playing all three formats for South Africa? Those are the things that I would need to consider.

“I feel in terms of my own game, the last year is certainly the best I have ever played. I still believe I’m on top of my own game, so performance-wise there is no question marks there.

“It’s just making sure that there’s a lot of purpose to what I’m doing. I’ve had a huge belief the last year and it’s been very easy for me to not even consider anything else because my purpose in captaining this team has been so strong. I didn’t even think of anything else.

“So, in the two or three weeks after this tournament, I will have a real look and see what the future holds for me.”

The route of South Africa’s problems are economic. The cricket board is simply unable to match the money on offer in T20 leagues or county cricket and has seen a steady stream of departures in recent years. And while du Plessis acknowledged that South Africa are not alone in suffering with such issues – he referred to all nations other than England, India and Australia as “second-tier nations” – he did not feel any further distribution of wealth is likely.

“It would be great for the rest of the teams if you could do that,” du Plessis replied when asked if he would welcome the ICC subsidising international salaries where appropriate. “If I had that much power to say that to the ICC I think I would have said it a long time ago. That is the perfect world, but we don’t live in a perfect world.

“Sri Lanka, New Zealand, West Indies and Pakistan: I think all of us fall into the same category, like maybe your second-tier nations and then you get your top tier which is a little bit different. West Indies are a great example. They probably are the worst off and that is why they have lost so many players to the circuit.

“I think England, Australia, India will always be the higher-paid nations. It is easier for the guys who are playing for England or Australia or India to remain in their countries and just play their cricket there. Obviously the currency is very strong but also the packages that they get paid are obviously a lot different to your smaller nations.

“If that changes, it will be amazing for the rest of the world, but I think it’s a long, long way from happening.”