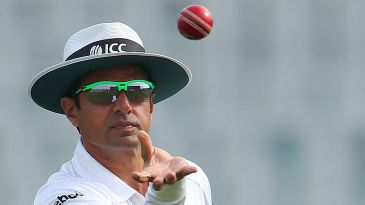 An apparent DRS timing error may have cost Sri Lanka a wicket on the first morning at Kingsmead.

Two balls after he had Dean Elgar caught behind in his first over of the day, Vishwa Fernando rapped Hashim Amla on the pads to spark a confident appeal for lbw. Umpire Aleem Dar was unmoved, and after a short discussion Sri Lanka captain Dimuth Karunaratne asked for a review – but Dar turned down the request on the basis that the visitors had taken too long to ask for it.

Section 3.2.2 of the ICC’s Test playing conditions stipulate that: “The total time elapsed between the ball becoming dead and the review request being made shall be no more than 15 seconds,” and “If the on-field umpires believe that a request has not been made within the 15 second time limit, they shall decline the request for a Player Review.”

According to the commentators on the SuperSport broadcast of the game, only 13 seconds had elapsed when Karunaratne asked for the review, and the TV umpire Ian Gould would have been in charge of timing the 15-second interval between the ball going dead and the review time limit.

“The bowler’s end umpire shall provide the relevant player with a prompt after 10 seconds if the request has not been made at that time and the player shall request the review immediately thereafter,” read the playing conditions. Dar made no visible prompt to Fernando or the Sri Lankan players at the 10-second mark as SuperSport’s cameras followed him on the field of play.

Had they been able to take the review, Sri Lanka would have had South Africa wobbling at 0 for 2 as replays showed that Amla would have been out lbw.

Shortly afterwards, the umpires were into the action once again when Amla made a late move to leave a ball from Suranga Lakmal and ended up sliding a catch to Kusal Mendis at second slip off the face of the bat.

The catch looked clean live, but Umpire Richard Kettleborough called for a TV review, giving a soft signal of “not out”. Replays showed that the ball had lodged straight into Mendis’ hands, and the soft signal was thus overruled by Gould.

“If that is given not out, well, I’m walking back to the Caribbean,” said Michael Holding on SuperSport’s television commentary as replays of the catch were shown on the screen.

“The Test match has not started well for the umpires,” he said. “First, 15 seconds reduced to 13, and now a soft signal of not out when it was clearly out.”