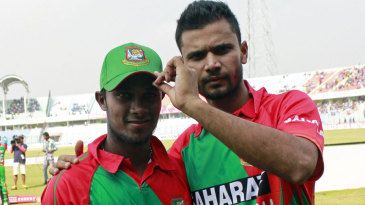 Bangladesh captain Mashrafe Mortaza has refuted chief selector Minhajl Abedin’s claim that he had asked for Sabbir Rahman to be part of the ODI series in New Zealand starting February 13.

Sabbir was suspended for six months in September 2018 but the BCB reduced that sentence so that he can be part of the squad. When the squad was named two days ago, Abedin said, “Let me make one thing clear, he is totally the captain’s choice”.

However, on Thursday, Mashrafe told BDnews24 that he only “suggested” Sabbir’s name because he wanted Mahmudullah to bat higher up the order and was in need of a good No. 7. “[Mahmudullah] Riyad definitely does this job quite well but should we be playing him at No 7 for so long? Isn’t it unfair on him to be batting so low? He doesn’t complain but as a captain I have to understand everyone. We have Shakib and Mushfiqur at No 4 and 5, so we should at least have Riyad batting at No 6.

“I want a 15-ball 25 or a 20-ball 35 from my No 7. Imagine who he will be facing at the World Cup – Starc, Cummins, Bumrah, Shami, Bhuvneshwar, Rabada, Steyn, Woakes, Stokes, Boult, Southee, Hasan Ali or Amir. Give me one batsman who can play shots with power or improvise against these bowlers. I think Sabbir has the ability. We don’t have any batsman doing this in the BPL even, and we have all seen how others have done in this position recently. I am not saying that he has proved himself but Sabbir’s strike-rate at No. 7 and his batting style tells me that he has the ability. In theory, he has the most ability among those who have batted in this position.”

Since his ODI debut, Sabbir has a strike-rate of 99.41, which is the highest among all Bangladesh batsmen who have batted at least five times between Nos. 6 and 8.

Mashrafe also reiterated that he didn’t strongarm the selectors into making any decisions. “Do I have the authority to place a demand?” he said. “Am I part of the selection committee? I gave my opinion when they asked for it. There was cricketing logic behind my opinion. It is up to the selectors if they want to pick someone in the side. They possibly thought that my logic was good enough. We would see a different side had they not agreed with my logic. I never asked them to pick Sabbir. I only gave logic behind my opinion.

“The coach and selectors had picked 14 out of the 15 players. They wanted my opinion about the 15th member. They placed several options in front of me, asking me who would be better to pick among Imrul [Kayes], Mosaddek [Hossain], [Abu Hider] Rony, [Nazmul Islam] Apu or Sabbir [Rahman].

“Soumya and Liton were there to open with Tamim. Nayeem [Islam] is there for spin cover for Shakib and [Mehidy Hasan] Miraz. We didn’t need the extra spinner. I have Mustafizur, Rubel and Saifuddin in the pace department. If it was a 16-member squad, I could have kept another pacer.

“I had Sabbir and Mosaddek as choices for No 6 or 7. Mosaddek hadn’t done that well in the BPL till Wednesday, and whether he is right for the No. 7 role is something that even the media has questioned a number of times. Was there an option other than Sabbir?

Mashrafe did add, however, that if Sabbir doesn’t mend his ways after getting suspended twice in 2018 for beating up one fan and abusing another on Facebook, it could spell the end of his career. “What could be more example-setting than the board suspending a cricketer like Shakib [in the past]? Still Sabbir did wrong things and got banned. You can’t do much when a player fails to understand.

“He got an opportunity this time but that doesn’t mean he got it all. If he cannot manage himself, then he has a dark future.”

Sabbir, meanwhile, termed the recall as a “second life”, and said he will try to focus on batting in his own way. “When I will play the first game, it will be my second debut. I will try to do better from here. I will try to bring back the old Sabbir. If I fail, I will keep faith in myself and do what the team management tells me to do.”