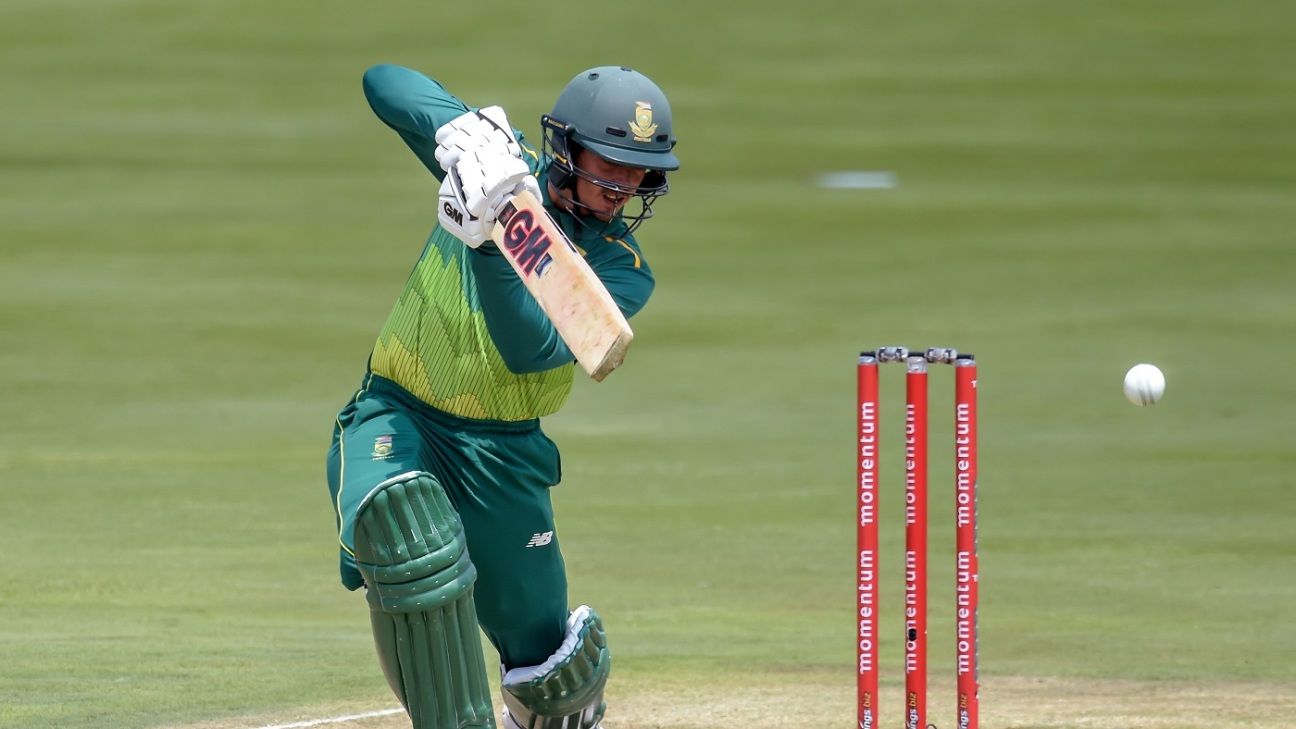 Bravery, consistency, and street-smarts – the qualities South Africa captain Faf du Plessis is looking for in his batsmen.

Du Plessis praised “a proper batting performance” from his team after they cruised to an unassailable 3-0 series lead with their highest one-day total of the season against Sri Lanka. South Africa’s 331 for 5 was built on Quinton de Kock‘s 108-ball 121 and Rassie van der Dussen‘s half-century, with Andile Phehlukwayo capping the innings with a rapid cameo, and du Plessis insisted “slowly but surely things are falling into place”.

South Africa’s batsmen have struggled to impose their presence collectively at home this summer, and du Plessis spoke about wanting more from his top order. “We spoke a little about the batting in the previous game, and wanting to be better and raising the standards,” he said. “Just purely on personal performance, 20s and 30s are not going to win us the World Cup.”

Du Plessis’ words suggested that the standard South Africa reached on Sunday reflected what he expected of his team at the World Cup. “If you’re doing okay, that’s not enough,” he said. “We want those standards to be higher and better, because that’s what is going to be the difference. We can’t have a mediocre batting line-up and one or two guys performing at the World Cup. We need two or three guys every single game to put their hand up.”

Being able to do that, he suggested, required bravery and a willingness to live and die by the mantra of positive, aggressive cricket that has been central to du Plessis and coach Ottis Gibson’s ‘Vision 2019’. “You need to be prepared to take the risks, you’re brave enough to take the risks, and you’re not scared of failing. Just playing a conservative style of cricket, I don’t believe it’s going to win you the World Cup.”

Nor, du Plessis insisted, would over-reliance on contributions from one or two players. De Kock and du Plessis are the two leading run-scorers in this series, averaging 98.66 and 102.50 respectively, but du Plessis is after collective brilliance, rather than individual glory.

“We don’t want to rely on one player,” du Plessis said when asked if South Africa are still searching for someone to fill the talismanic role performed by AB de Villiers before his international retirement. “Obviously AB is a fantastic batter, but sometimes you can in the back of your mind just rely on guys like that, and that’s not the way that I want us to play as a team.

“Everyone needs to contribute, every single game. You’re not guaranteed a performance, but you’re guaranteed of putting in the style of play, of putting in the hard work and raising your intensity, and trying to make sure that you can be a better player than you’ve been before. And I think slowly but surely you can see that from the players.”

While South Africa don’t want to rely solely on him, de Kock has struck an ominously rich vein of form this summer, his counter-attacking style putting bowlers under pressure across formats and getting South Africa off to the sort of starts they will need in England.

“It puts the bowlers under real pressure,” du Plessis said of de Kock’s ability to score quickly from the get-go. “When he’s on, you as a batting unit can take a team down. He hits good balls for four. Most batters will allow for the bowler to make a mistake and then take it to the boundary, but what he does when he’s in that mode is he hits you off your good balls and then you bowl bad balls to him. Because some bowlers will get a bit of white knuckles against him, because they fear what he does to them. So when he does do that, he almost transforms the bowling attack for the rest of the batting line up. It’s a real dangerous power that he has, and we’re lucky to have him in our side.”

While de Kock has come good at the top of the order, South Africa have been missing a little vim from their lower middle-order. Against Sri Lanka on Sunday, Andile Phehlukwayo led the charge with 38 from just 15 balls as South Africa took 99 from the last ten overs – but on a dry track, against a skillful bowling line-up, it wasn’t all about blasting the ball out of the ground.

“That was power hitting, but there was a lot of smart cricket through that as well,” du Plessis said of Phehlukwayo’s knock. “Once again that’s showing that Andi’s game has evolved, he’s grown into a better cricketer.

“The guys are going towards the right direction. We’re making less mistakes. We’re getting better as a team. This series was about answering the questions that we had from a balance point of view, and I’m 99.9% sure we’re there where we need to be. The next two games will give the 0.1% of the things that are still in pencil.”