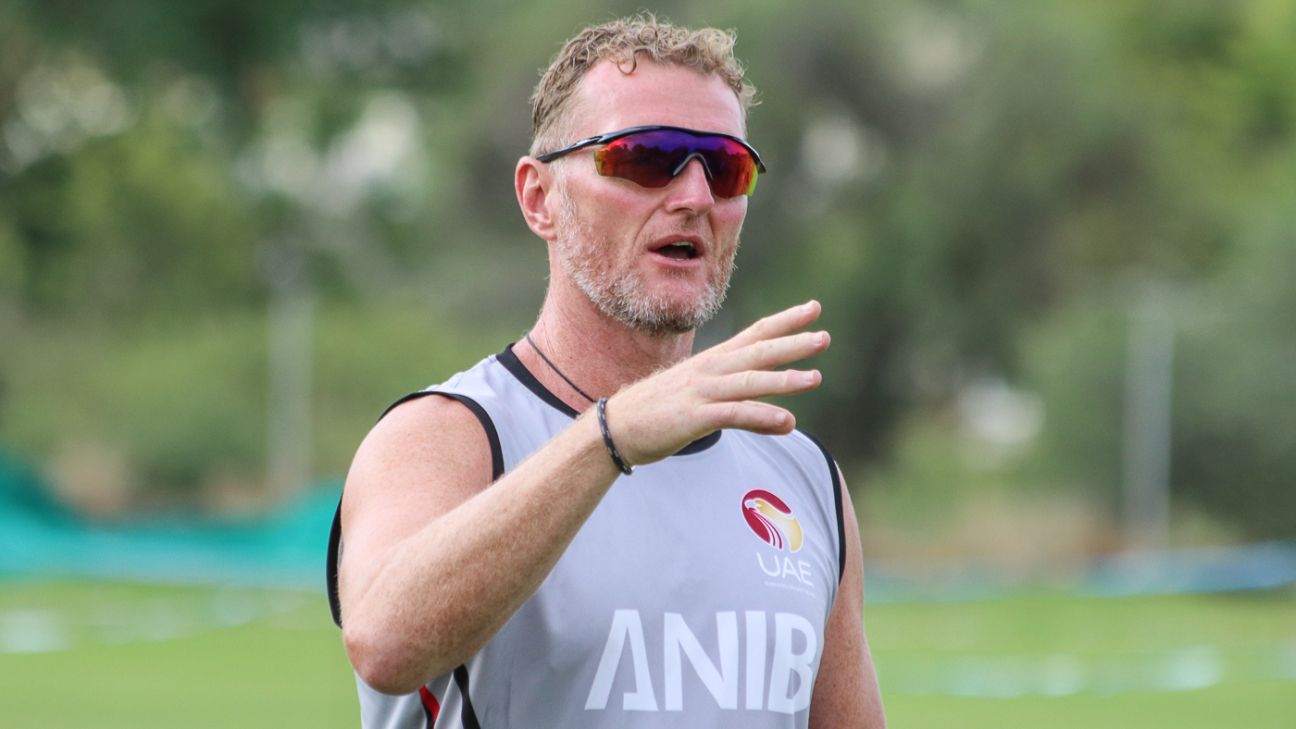 UAE may have been denied an opportunity to pull off an upset courtesy bad light, but their head coach Dougie Brown feels it was the correct decision to walk off. When the match was decided by DLS method, Zimbabwe needed 25 off three overs with six wickets in hand.

Brown felt the light had been deteriorating badly for some time as play continued for several minutes beyond the sunset time of 5.49pm. This extension was largely a result of a two-hour delay for rain in the first innings that resulted in the chase being truncated to 35 overs, off which Zimbabwe were set a revised 210.

“It’s not an ideal way to finish a one-day international, because of bad light,” Brown told ESPNcricinfo. “If I’m honest, it was very, very dark. We probably could have come off a couple of overs earlier but we didn’t. The umpires tried to keep us on the field, which I think was the right decision, while spin was being bowled. But the game was still very much in the balance at 25 required off 18 balls.

“I think going off because of the light was the correct decision, but it’s really bitterly disappointing for either team that none of us really got a chance to win the game.”

Brown gave credit to Shaiman Anwar and Ghulam Shabber giving UAE a chance to win in the first place. The pair offset Kyle Jarvis’ three-for inside seven overs by putting together 131 on either side of the rain break at the 29-over mark.

“We lost the toss again and it was very favourable conditions to bowl,” Brown said. “They bowled really well for the first three wickets but thereafter Shaiman and Shabber played exceptionally well and they deserve a hell of a lot of credit for the way that they went about constructing their innings. Disappointing to not finish as well as we could have done, but was wery happy to be defending 209 in 35 overs.

“The pitch was still offering a little bit for us although the outfield was wet so we had to try and make sure we dipped in with the new ball. We bowled pretty well. We didn’t quite manage to get too many wickets with the new ball but we chipped away and got ourselves into a winning position at one stage. It was disappointing not to get across the line but you would expect a Full Member like Zimbabwe with experience in their ranks to fight, and fight is exactly what they did.”

Even though UAE was in a decent position in the field at 92 for 4 in the 20th over in the field defending an adjusted total of 209, Brown says Chakabva and Peter Moor batted exceptionally well to get back in front in DLS before play was called off. Moor in particular boosted Zimbabwe in the waning overs to finish with an unbeaten 45 off 33 balls.

“We need to give a bit of credit to Zimbabwe for the way that they scrapped,” Brown said. “They got themselves into a bit of a hole themselves. We dug ourselves out of one and they managed to dig themselves out of one. At 92 for 4, if they lose a fifth wicket, particularly Moor – we know he’s a dangerous player and as captain he feels that he’s got to carry the team’s outcome on his shoulders. We knew we had to get him out but he didn’t give a chance and he played really well.”

Brown also underlined UAE’s poor finish to their innings as one of the factors in the loss. In the six overs left to bat after play was reduced to 35 overs, UAE lost six wickets, including 4 for 4 runs in the last 11 balls.

“We messed up the last five overs,” Brown said. “We only scored 31 runs and lost six wickets. We probably pride ourselves in being able to finish an innings pretty well but I think they played well. They bowled well, made good plans and we didn’t quite manage to react to the plans that they had. It’s disappointing to come away having only scored the 31 runs off the last five overs but they deserve a bit of credit for the plans they put in place.”