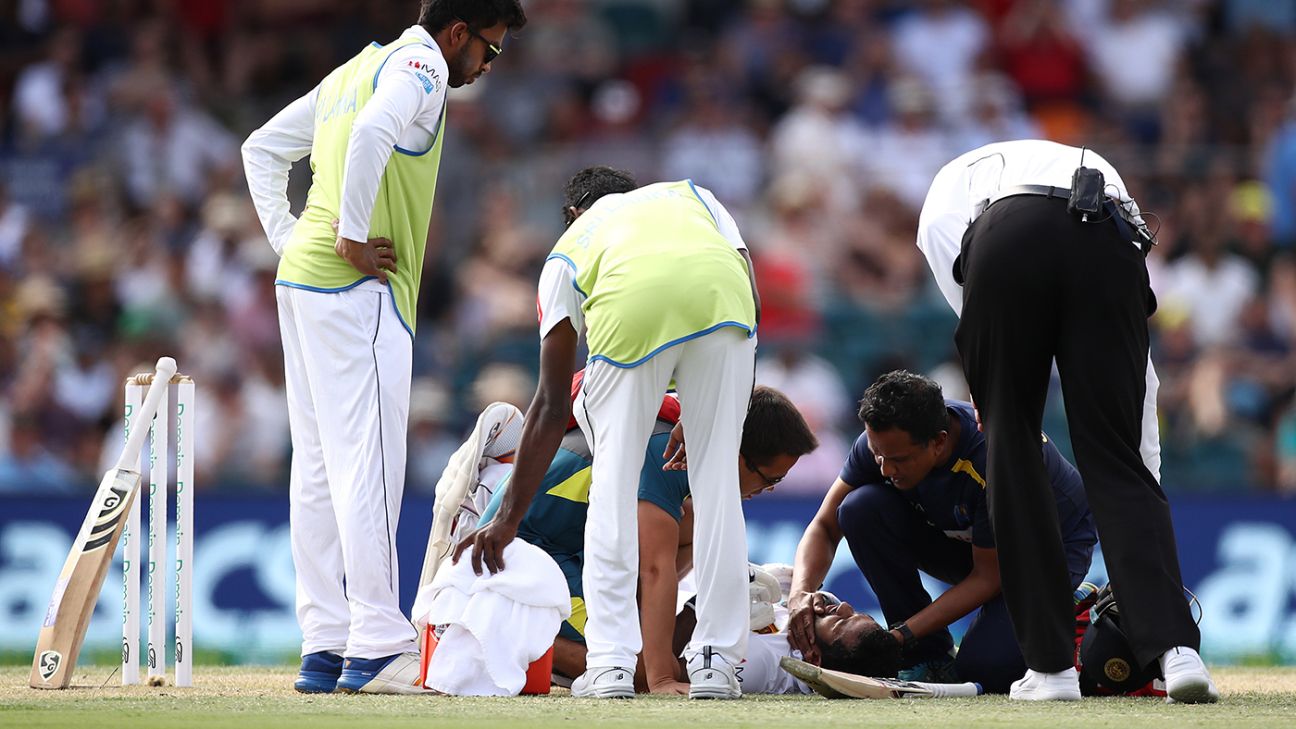 Dimuth Karunaratne had substantial medical attention and was stretchered off the field, after sustaining a nasty blow to the back of the head from a short delivery bowled by Pat Cummins.

Attempting to duck the bouncer in the fourth delivery of the 31st over, Karunaratne turned and tucked in his head. But the ball did not rise as high as he had expected, and struck him seemingly on the top of the shoulder, before hitting the area where his neck meets his skull.

Dimuth was wearing a helmet with the rear attachments designed to shield a batsman’s neck, and though it was the equipment that the ball seemed to strike, he immediately collapsed backwards, losing grip of his bat. He lay still on the popping crease, as the Sri Lanka physio and the Australian team doctor rushed on to the field.

Although clearly in immense discomfort, it is generally believed to be a good sign that Dimuth was conscious throughout the episode, and was seen talking to the medical professionals assisting him. He also moved his hands and fingers.

The medical staff put a brace around his neck, transferred him gently on to a stretcher, then drove him off the field, with members of the Australia team showing concern, as well as Dimuth’s own teammates. Australia captain Tim Paine and Cummins himself watched proceedings closely.

Cricket Australia later said: “Dimuth complained of pain in neck and tingling to his hands following being struck in the back of the neck, decision then made to transport him to hospital where he is currently being assessed. Updates will be provided when more is known.”

It is likely that Dimuth will now undergo scans in hospital, to inspect for any damage, and to check for concussion.

He is the fifth Sri Lanka player to suffer an injury on this brief tour, with four fast bowlers already having broken down. Dimuth had been batting well, on 46, when he was struck. His opening stand with Lahiru Thirimanne, worth 82, was Sri Lanka’s second-best first-wicket stand in Australia.