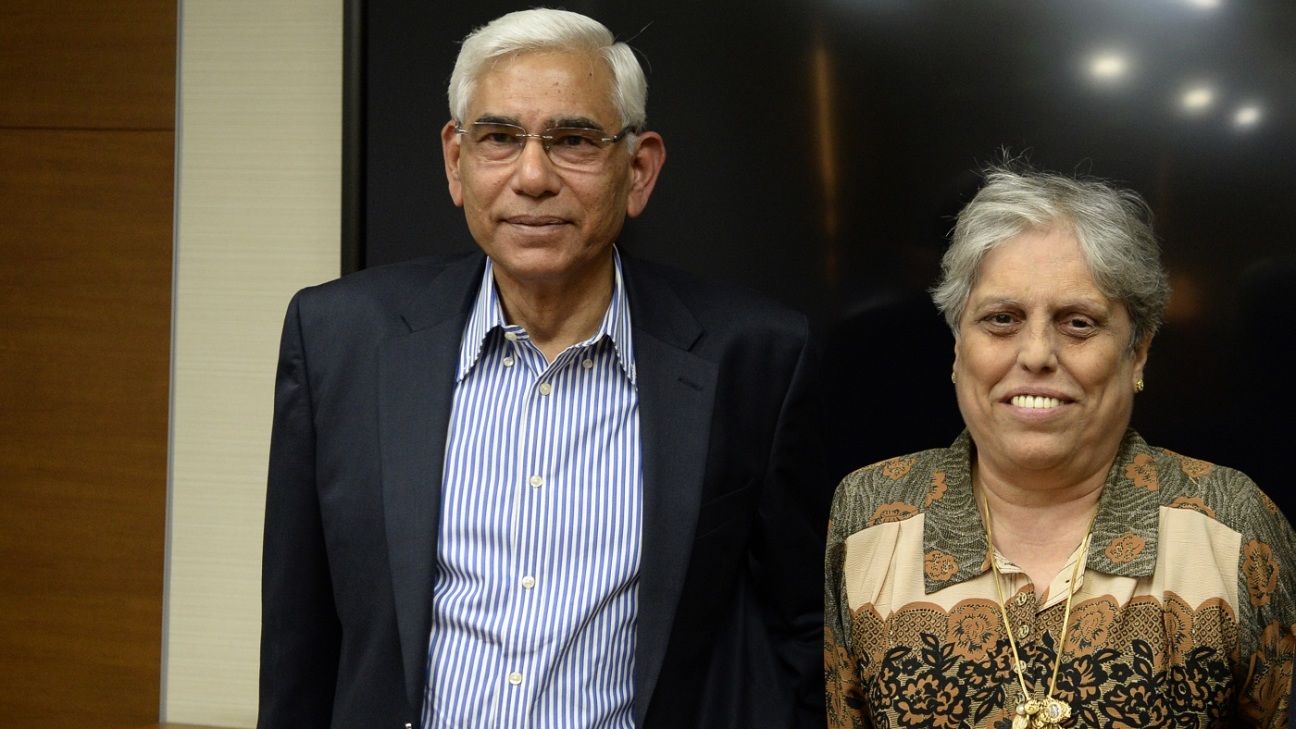 Among the first four members of the now outgoing Committee of Administrators (CoA), Diana Edulji has agreed with new BCCI president Sourav Ganguly‘s view of giving priority to first-class cricketers in India. Edulji said the CoA was working towards that but “could not finish” it. The CoA is set to hand over the reins of the BCCI to the new office bearers on October 23.

Speaking on her penultimate day in the BCCI after meeting the other two CoA members to wind up their duties, Edulji also looked back at her 33-month period, including their achievements and even the differences she had with Vinod Rai, saying she did not expect her “nightwatchman” duties to last so long.

“Yes, a lot more work [has to be done], we were working on that but could not finish it,” Edulji said in Mumbai at the BCCI headquarters about the first-class circuit. “The players, the domestic structure does need a look in, so we can attract more cricketers to the game and let’s hope for the best.”

Among the numerous issues Ganguly has already addressed even before officially taking over as the president, was “taking care of” the share of revenue the BCCI gets from the ICC, which reduced in 2017. When asked if the CoA was somehow responsible for the drop in the BCCI’s revenue share, Edulji said, “I would not want to comment on that because I would not want to say I have done something wrong or they are saying something wrong. Let’s see how it goes forward, all the best to them (new administrators).”

Appointed by the Supreme Court in January 2017, Edulji and Rai had taken over, along with Ramachanda Guha and Vikram Limaye, to oversee the running of the BCCI. Guha later resigned while Limaye moved on, and Lt Gen (retd) Ravi Thodge joined the duo of Rai and Edulji earlier this year.

“It was a good experience and a long journey,” Edulji said. “Didn’t think that the journey would last so long, but I am happy with the end result that elections and office bearers are coming back and BCCI will be run by them now.

“No, not all (no regrets). We (Rai and Edulji) have had our differences and we aired it openly also. In any organisation, that works. And I have always batted on the front foot or bowled my armers well, but no nothing personal. It was just (on) principles that stands were taken and that’s it.

“We (Rai and Edulji) have had our differences and we aired it openly also… I have always batted on the front foot or bowled my armers well, but no nothing personal.”

Diana Edulji on her equation with Vinod Rai

“If I wanted to say something, I have always called a spade a spade and I don’t hold back. I have enjoyed my journey of 33 months, I never expected it to be so long, and as Mr Rai said, it was a nightwatchman, but this was more than a nightwatchman also. I’ve never heard of a nightwatchman scoring a double-hundred or triple-hundred (laughs). It was a great learning experience, handling BCCI and I hope I can do something more after I finish my cooling period (laughs).”

Was the CoA able to implement all the reforms as they were defined by the Supreme Court and the Lodha Committee’s recommendations?

The CoA had taken over the supervision of the BCCI during troubled times after the board was hit by a betting scandal in the IPL and the matter was taken to the Supreme Court, but Edulji steered clear of blaming previous office bearers, under whom the board had landed in trouble.

“I would not want to run down the people before, I wouldn’t say that we have done a better job than them,” she said. “Whatever role we had, we tried to complete our duties, let’s hope it goes forward and they take in the right spirit whatever we have done and move on. Life has to move on.

“It is good that a [former] player [has become a president], he knows in and out what players’ require…when he was a player what he expected from BCCI, and now when he is sitting on that seat, I wish him all the best and let’s hope that he will do well and cricket should do well.”

The final official CoA meeting with the three members lasted about two hours on Tuesday afternoon after which Lt Gen Thodge said they had finished implementing “almost” all of their tasks and responsibilities.

“We’ve almost implemented things the way we wanted to,” Thodge said. “There are certain things to be done, our status report has been submitted to the court and we’ll see whatever comes.”

Thodge also elaborated on the conflict of interest issue that’s been coming up time and again, and was even mentioned in the CoA’s 11th and final status report they submitted to the Supreme Court last week.

“We (CoA and Ganguly) are in agreement with it and the last time when we had a meeting here, Sourav attended on video conference from Calcutta and we had lots of discussions on that issue,” Thodge said. “He’s aware, and it’s one thing that needs to be addressed otherwise we’ll have a problem in having anybody as a coach or for any BCCI appointment it will be an issue.

“So to facilitate cricketers being involved in the cricket administration, it is essential that conflict of interest has to be relooked into, it’s not that it should totally go. Where the personal and financial benefits are there, those will be taken care of. But if the interest of cricket suffers because of conflict of interest then it needs to be addressed. I think he (Ganguly) has mentioned that same point because we had almost a three-hour discussion at that time and he’s got his views on that.”