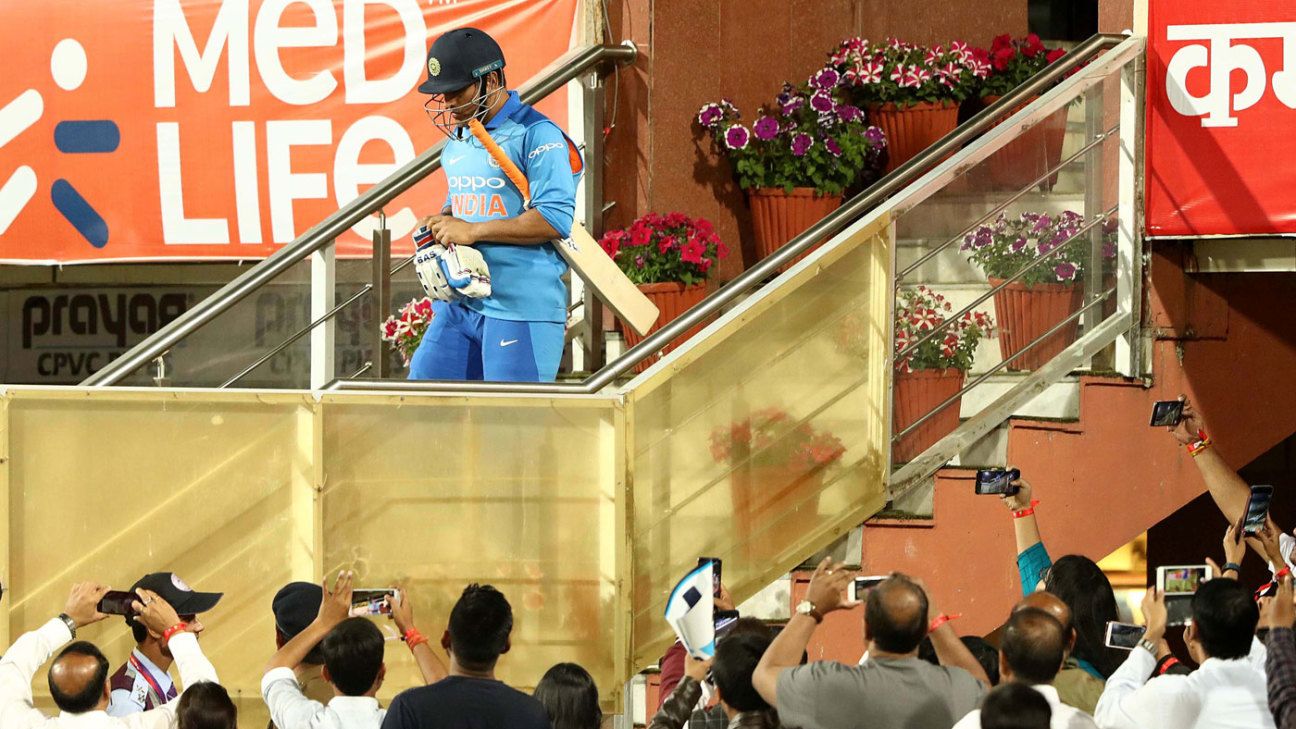 MS Dhoni might have played his final ODI in India after the team’s assistant coach Sanjay Bangar said at the post-match press conference that the wicketkeeper-batsman would be rested for the final two matches against Australia. Rishabh Pant is set to keep wickets in the remaining games after India captain Virat Kohli said “couple of new faces” would be brought in.

Bangar said that Dhoni would be “taking a break” for the matches in Mohali on March 10 and in Delhi on March 13. Along with Dhoni, another player who may miss the Mohali ODI is fast bowler Mohammed Shami, who got hit on his shin in his follow-through after Aaron Finch drove the ball back in the fifth over of the third ODI.

“There will certainly be some changes (in the team XI) because Mahi (Dhoni) is not going to play the final two matches. He is taking rest,” Bangar said. “Also, Shami got hurt today in his leg so we will need to check whether he can be fit for day after (Mohali ODI). If he does not get fit then Bhuvneshwar Kumar could come in.”

Whether India make more changes remains to be seen but Kohli did state at the post-match presentation that India will test a couple of players in the remaining matches.

“We will have a few changes in the next couple of games,” Kohli said. “We will have to figure out what those changes are. But the idea is still to go out there and ask the guys to put in match-winning performances and take a lot of pride in winning for the country. That mindset will not change. Yes, we’ll have a few new faces and they’ll be given chances, and they have to make the most of the chances because there’s a World Cup coming in. Everyone wants to be on that flight as well.”

Although Kohli carved out another memorable century, his 41st in ODIs, the Ranchi crowd had packed the stands to see their local hero, Dhoni, in India colours probably for the last time at his home ground. Dhoni would have been a bit disappointed, when on 26, he failed to counter a full delivery from legspinner Adam Zampa. It brought to an end a 59-run fourth-wicket partnership with Kohli after the pair had been brought together at 27 for 3.

Keeping the World Cup in mind, the selectors have been balancing the workload of key players over the past few months. Kohli was rested after the first three ODIs in New Zealand while strike bowler Jasprit Bumrah was given a break after the Test series in Australia in January before he returned for the current series.

Dhoni, 37, has off late faced some hamstring problems and was even rested for a couple of matches in New Zealand. With the IPL beginning on March 23, where Dhoni will lead defending champions Chennai Super Kings once again, the selectors would have wanted Dhoni, one of the key players for India at the World Cup, to get some rest.

That decision opens the doors for Pant to play the only two ODIs India play before the World Cup, which begins on May 30. Pant has only played three ODIs yet, but both Kohli and MSK Prasad, the chairman of selectors, have strongly backed the 21-year-old, saying he is part of the World Cup deliberations.