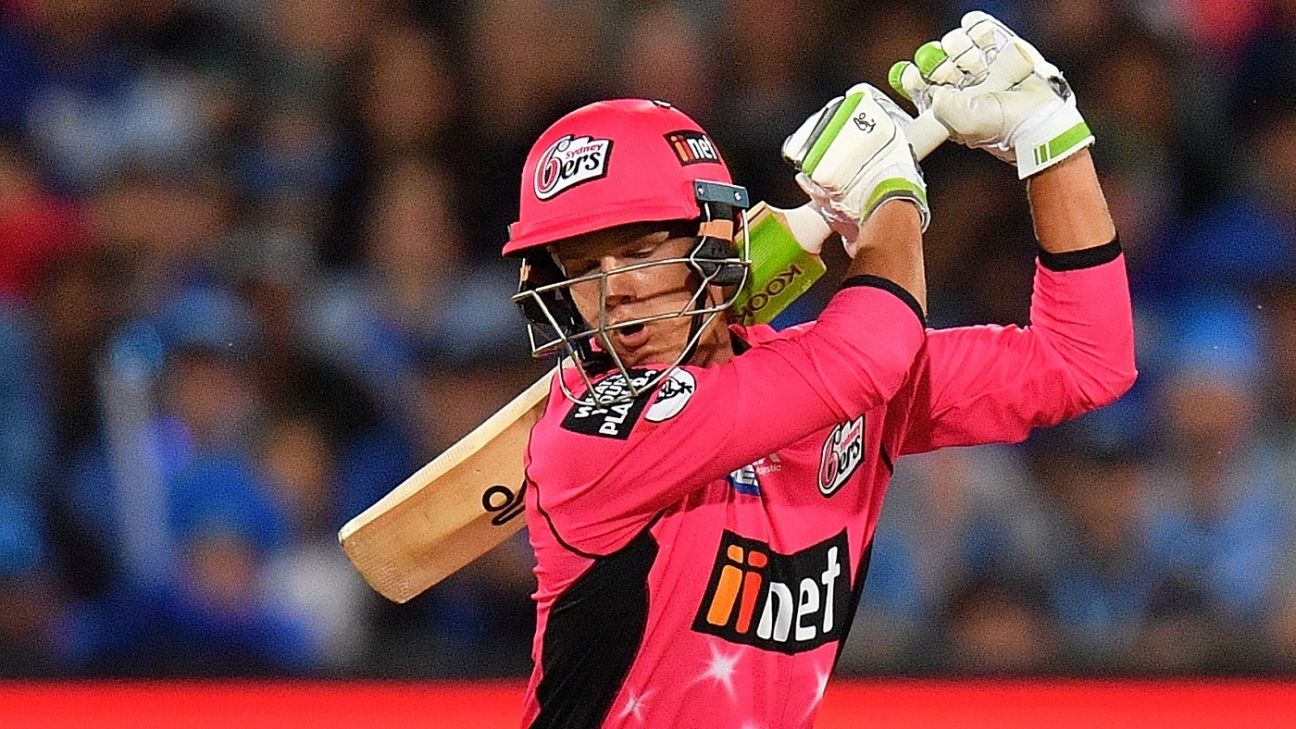 Joe Denly and Josh Philippe capitalised fully on a disciplined Sydney Sixers bowling display to guide the visitors to a strong victory over Adelaide Strikers in the big Bash League match at Adelaide Oval.

The Strikers, having won the toss, were never able to generate significant momentum from the moment that Alex Carey was run out in the opening over of the night, as Ben Mantenti and Ben Dwarshuis delivered economical new ball spells that were followed up by Steve O’Keefe and Sean Abbott.

While Denly started the Sixers’ chase in intelligent fashion, Rashid Khan briefly threatened to upend the innings by deceiving Moises Henriques and Jordan Silk in the 13th over. The night’s definitive conclusion was to be reached via the burgeoning talents of Philippe, who galloped to an unbeaten 30 from 15 balls that allowed the Sixers to reach their target with 10 balls to spare and move up to second on the table behind the undefeated Hobart Hurricanes.

Carey has been a key part of why the Adelaide Strikers won last year’s tournament, and have remained very much in contention this time around, leaving the Sixers in no doubt they needed to find a way past him early on. But they cannot have counted on gaining Carey’s wicket via a run out as early as the fifth ball of the match, delivered by Ben Manenti.

Jake Weatherald’s cover drive was well struck but straight at the Sixers captain Henriques, who gathered and threw quickly enough to capitalise fully on Carey’s momentary hesitation at the non-striker’s end. This run out stunned the Adelaide Oval crowd, and also allowed the Sixers to dictate terms for the remainder of the Powerplay, to the extent that the Strikers could only manage a mediocre 2 for 42 from their opening six overs in favourable batting conditions.

All’s well that ends with Wells

Though Weatherald was to atone somewhat for the early run out by compiling a half century that grew in fluency the longer it went on, the Strikers were looking squarely at a total barely clear of 130 before Jon Wells came to the crease. A consistent, if low-profile, contributor to all the teams he has represented, 30-year-old Wells was tonight able to play the role of the swashbuckler, cracking 42 from 29 balls while scoring at better than a run a ball against every Sixers bowler he faced.

On his last start for the Sixers before flying out to play for England in the Caribbean, Joe Denly was still in search of a significant score. The opportunity presented by a middling Strikers total was an attractive one however, calling for controlled aggression rather than an unbridled attack. After Justin Avendano fell cheaply, Denly was able to form useful stands with Daniel Hughes and then Henriques, ensuring the Sixers’ Powerplay was a more than adequate 1 for 50.

Later, when Rashid struck twice in the 13th over to give the Strikers and an expectant home crowd a glimmer of hope, Denly kept his composure to form a final, match-sealing partnership while ensuring that Rashid was unable to usher the sort of collapse that the hosts required to manufacture a win.

Josh Philippe had been subject to something of a tug-of-war between Perth Scorchers and Sydney Sixers in the run up to this tournament, with the magenta clad team winning out in part because the banned Steven Smith made a personal pitch to provide mentoring to the 21-year-old. On the same night Smith turned out in the distant Bangladesh Premier League, Philippe was to show why the Sixers were so eager to get him, with an innings of impudence and nerve to ensure victory for the visitors.

First ball, Phllippe showed he does not lack for brio, paddle sweeping Rashid to the boundary from a delivery on the line of the stumps and leading to bowled or lbw if he missed. Other choice strokes from Philippe included an inside-out cover drive off the otherwise parsimonious Peter Siddle, and a dismissive clubbing of Michael Neser well beyond the midwicket boundary. Another Philippe blow off Neser, this time down the ground, completed the Sixers’ triumph, and left the Strikers’ captain Colin Ingram to conceded his men were around 30 runs short.