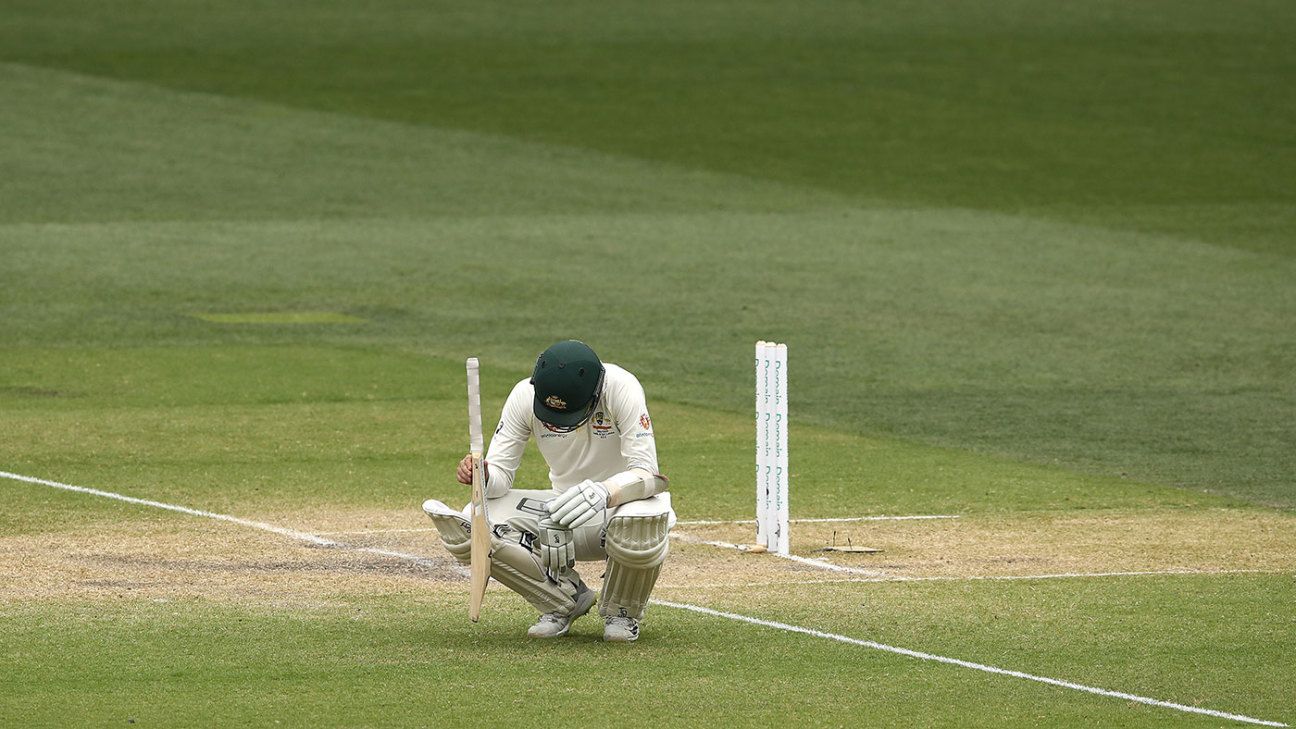 How did Australia come to lose at home to an Asian nation for the first time in more than 140 years of Test cricket? In a word, impatience. Impatience at all levels, and at all stages.

Impatience that started with the prospect of losing away to South Africa last year, impatience leading to doing illegal things with the ball and then lying about how they had been done. Impatience to calm a restless public and sceptical broadcasters, leading to bans on Australia’s two best batsmen that could only expose the results of other kinds of impatience in other sectors of the game.

At the same time, impatience for money, for the biggest broadcast rights deal in the history of Australian cricket, led to deals with two television broadcasters and three radio networks, all asking for more and more access, more and more of an insight into a team finding their way back from the Newlands morass. Impatience for resignations, for blood and for bodies, brought a massive turnover at the top of the game. Darren Lehmann, James Sutherland, David Peever, Mark Taylor, Pat Howard and Ben Amarfio all went, replaced by Justin Langer, Kevin Roberts, Earl Eddings, tbc, Belinda Clark (interim) and Stephanie Beltrame.

There was impatience in the schedule. Impatience to accede to the wishes of the BCCI and the Indian team, allied with impatience about the decline of Brisbane’s Gabba as a venue, resulted in the scheduling of a day Test in Adelaide, and its billing as the first match of the series. If the impatience to schedule limited-overs matches exclusive to Fox Cricket, befitting their lion’s share of the A$1.18 billion broadcast deal, meant that India’s preparation was made partly via T20, it was nothing next to the jumble of formats the Australian players were asked to contend with. Even had Steven Smith and David Warner been available, they would have wondered at the wisdom of so many format changes entering into the Border-Gavaskar bout.

ALSO READ: How do Australia fix their batting before the Ashes?

On the first morning of the series in Adelaide it was momentarily India’s turn to be impatient. The visiting batsmen fenced uncertainly at a new ball hurled wide of the off stump on a fresh pitch resulting, for one, in the finest snare of the series as Usman Khawaja stretched out to catch Virat Kohli. It looked, briefly, as though Australia could be patient enough to succeed. But instead they were to be delayed, frustrated and ultimately defeated by Cheteshwar Pujara, a model of impassiveness with the bat and the eyes, fostering trust, confidence and patience among teammates who had previously appeared skittish and nervous about their best ever chance to unseat Australia.

These emotions and thoughts were to be redoubled by the way India’s bowlers set about the task of teasing out the underlying impatience in Australia’s batting on their first day’s bowling for the series. Ishant Sharma, pilloried for his prior record in Australia at the outset of the tour, set the early marker by playing on the impatience of Aaron Finch, himself a selection resulting from impatience to find the right combination for the UAE series against Pakistan that resulted in his retention, despite all indications that he is not a top order Test player in home conditions.

Impatience to feel the bat on the ball told for numerous other dismissals, not least those of Marcus Harris and Peter Handscomb once they appeared to have done much of the hard work. Khawaja, the most patient batsman in the team based on the evidence of his staunch Dubai occupation, was corralled into error by deft touring bowlers giving him precious little to hit: were Australia to win, Khawaja needed to be more patient than Pujara, and he was unable to find the mental and technical reserves to do so. Nor was another older head, Langer’s longtime project player Shaun Marsh.

A first-innings eclipse set the script for the opening Test, even though the Australian lower order made a bold attempt to get closer to their fourth innings target than Kohli would have preferred. But a 31-run win was still a win, in the match where many reckoned India would be at their most vulnerable. In the rearview mirror of a completed series, Australia’s captain Tim Paine lamented this result most of them all. “We honestly feel that we let that Test slip,” he said. “We thought we had a number opportunities during that Test to go well ahead of the game and when those key moments came up India outplayed us to be honest.” Outplayed through patience.

In Perth, on a lively new stadium pitch that won the admiration of many apart from that great WACA Ground loyalist Dennis Lillee, the Australians prevailed in conditions that did not require the same level of patience as other venues. The outfield was faster, the ball did more, the bounce was higher and faster, the action more frequent. Nevertheless, it was still Australia’s least impatient performance of the series, as Harris, Finch, Khawaja and Paine all played innings of substance to give the bowlers something to defend. Kohli, having played beautifully in the first innings, visibly lost patience when dismissed via a low catch by Handscomb, and allowed himself to be goaded into poor decisions and defeat by an alertly abrasive, though not abusive, Paine.

A 146-run victory at the new stadium was hailed across Australia, not least by broadcasters capturing every autograph signed for fans, and every harsh word uttered for the indirect benefit of the stump microphones. In keeping with the new paradigm, Langer marked the result by speaking to Fox instead of the press, the first time an Australian coach had done so in memory, and pronouncements of a new era were many. India, though, reasoned that 1-1 after two was their best opening to an Australian series in 15 years, and this team had no Ricky Ponting to compile the innings that allowed the visitors’ 2003-04 lead to be reeled back in.

Equally, the Australians felt the force of the impatience within and without them. As Paine said before the final Test in Sydney: “The difficult thing after Perth was more the external stuff, for a younger group we had gone from a team that was no good to all of a sudden really good and then we were back down here, so it is about trying to keep a bit of perspective a reality about where we are at.” The “down here” Paine spoke of was reached in Melbourne, where a drop-in pitch worked upon diligently by the curator Matt Page did not perform as expected, by proving to be virtually featureless on Boxing Day before drying and deteriorating in a manner favourable to the team batting first.

If that was a stroke of misfortune, leading Paine to complain bitterly about the pitch in the aftermath of the match, there could be no excuses made for the types of shots played by many of the batsmen in each innings. Finch, Harris, Travis Head and Mitchell Marsh all met their ends through impatience and a desire to get the game moving, as though deaf to the repeated exhortations of Langer that “there’s so much time in Test cricket”. They were worked over by the increasingly masterful Jasprit Bumrah, who in the same breath left many wondering why Australia’s vaunted pace attack could summon neither his control nor an equivalent level of impact with the old ball.

Between overs, the “gutsy” Vodafone advertisement fetishised Smith’s tearful post-Newlands press conference and commodified his CA-imposed community service, while the former captain skipped from a New York holiday to a stint in the Bangladesh Premier League alongside Warner. A commentary box bursting with opinions, both on the air to viewers and off it to the increasingly harried Langer, started to ask questions of the “big three” Mitchell Starc, Josh Hazlewood and Pat Cummins, even as Cummins was belatedly rewarded for strong spells earlier in the series with a bevy of legside wickets at the MCG.

India, then, retained the Border-Gavaskar Trophy, but needed to avoid defeat in Sydney to claim the series. Again Australian impatience was evident in selection, reaping a recall for Marnus Labuschagne and his promotion to bat at No. 3, the posting usually handed to a senior player. Upon losing his third toss out of four, Paine and his bowlers appeared to lose patience remarkably early on the first day, resorting to the use of short balls when shine was still evident on the Kookaburra and live grass on the pitch.

Pujara had, once again, exposed the impatience in the home team, and would go on to exploit it well into day two. He laid a platform for the ebullient Rishabh Pant, as the series was effectively won before Australia could even bat. Rain made it all moot, leaving Australia without a single centurion, or an aggregate run-maker of more than 300 runs, for the first time in a home series of four or more matches.

By this time the evening rhythms of summer had been taken over by the now familiar thrum of the Big Bash, which while entertaining is enough of a step down from international cricket to allow Handscomb and Finch to go from looking utterly out of sorts in the Tests to high class in the T20s. Faced with a paucity of genuinely convincing options, the national selectors were left to sift through them to find a winning combination to face Sri Lanka later this month, as a prelude to the Ashes in England later this year.

But in a system where impatience to find great players has stripped away so many merely good ones, and where there is increasing impatience to disband the selection panel itself to give Langer freer rein, there looked to be no easy answers. None other than patience, that is.