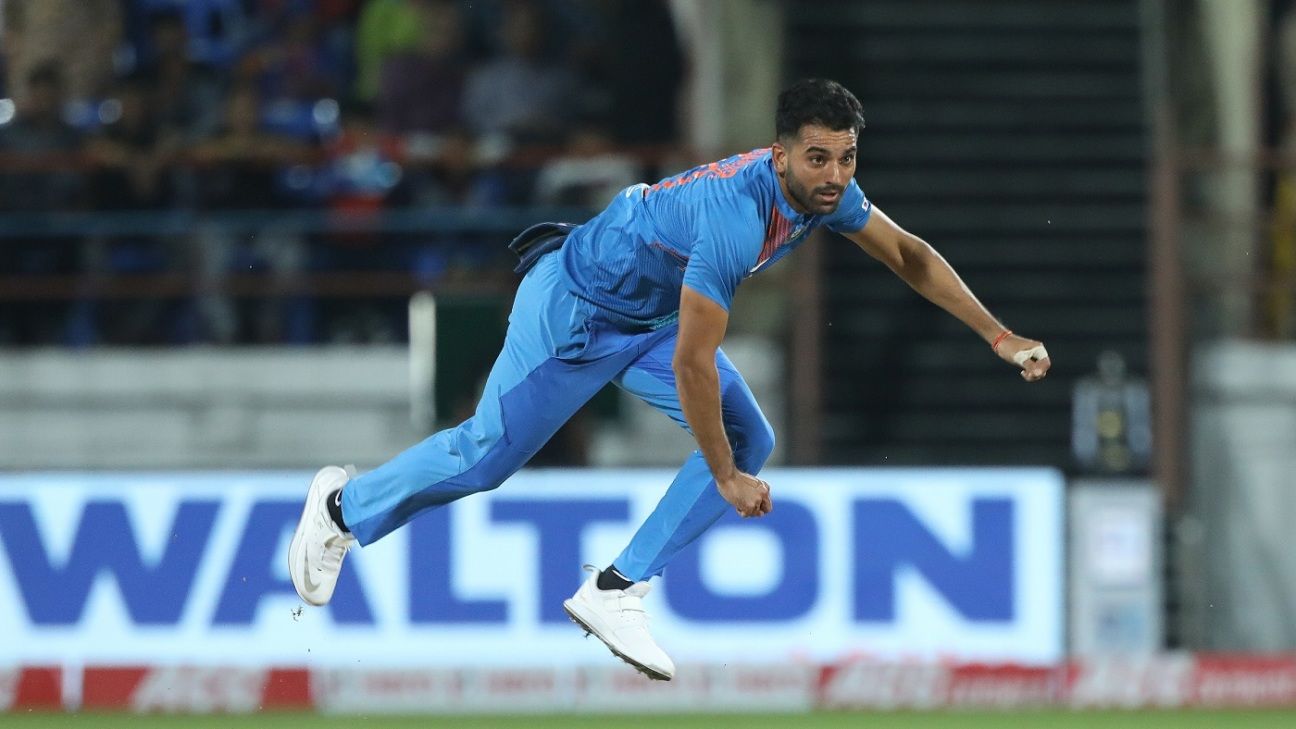 Fresh off his world-record returns of 6 for 7 for India in the third T20I against Bangladesh, Deepak Chahar added another rich haul of wickets in the Syed Mushtaq Ali 2019-20, taking four wickets in an over for Rajasthan against Vidarbha in a Group B match at Greenfield International Stadium in Thiruvananthapuram. That performance, however, couldn’t prevent Vidarbha from winning a thrilling match by 1 run.

Chahar’s haul included three wickets off the last three legitimate balls of his last over, and of the Vidarbha innings too, but he had bowled a wide after the fourth ball, which meant he narrowly missed out on taking a hat-trick in two successive matches, just two days apart. He still ended with 4 for 18 in three overs, and has now taken ten wickets in his last 6.2 overs for just 25 runs.

Before Chahar narrowly missed his hat-trick, Uttarakhand left-arm spinner Mayank Mishra got his. Mishra had taken the new ball for his side against Goa, and took out Aditya Kaushik, Amit Verma and Suyash Prabhudessai in his second over – the innings’ third – to leave Goa reeling at 7 for 4. They eventually mustered only 119 for 9, and Uttarakhand breezed to the target in 16.4 overs.

Vidarbha’s innings was interrupted by rain at the seven-over mark, and the game was shortened to 13 overs a side. Chahar, who had given up 12 runs in his first two overs without any wickets, came back to take four in the final over of Vidarbha’s innings as they finished on what seemed a sub-par 99 for 9.

Rajasthan looked like they would overhaul the VJD-adjusted target of 107 easily, having raced to 60 without loss in 4.2 overs, before a spectacular collapse. They lost eight wickets in the next 7.3 overs and were tottering at 96 for 8, with 11 needed off the last seven balls. Rahul Chahar and Aniket Choudhary, the Nos. 9 and 10, could get only nine runs, as Rajasthan finished on 105 for 8.

Akshay Wakhare was Vidarbha’s best bowler with 3 for 15 in his three overs.

Most of those who were part of India’s T20I squad for the games against Bangladesh turned up for their state sides. Rajasthan also had the services of Khaleel Ahmed, alongside the Chahar cousins.

Among the other India internationals, Manish Pandey‘s was the most striking show. Pandey continued the rich vein of form that he started the season with, smashing his third T20 century and driving Karnataka to a record 250 for 3 at ACA Sports Complex in Vizianagaram in a Group A game.

Pandey raised his century off just 44 balls, ending with 129* off 54 balls. It was the second-highest T20 score by an Indian, behind Shreyas Iyer’s 147 against Sikkim earlier this year. Wriddhiman Saha had also made 129, against Arunachal Pradesh, but Pandey’s was an unbeaten innings.

Services started their chase with spirit, but couldn’t sustain the pace and finished a sizeable 80 runs short on 170 for 7.

Shreyas Gopal completed a fine day for Karnataka with 5 for 19, his second five-wicket haul in T20s, shrugging off a minor slump that had led to him being dropped from the XI in the climactic stages of Karnataka’s winning run in the Vijay Hazare Trophy last month.

Karnataka’s total was the sixth-highest T20 innings in India, and the third highest in the Mushtaq Ali trophy. This was the highest total in the tournament against a non-Plate League opponent, though, with Mumbai having hit 258 for 4 against Sikkim and Andhra making 252 for 4 against Manipur – both in the 2018-19 edition of the tournament earlier this year.

Afghanistan’s 278 for 3 against Ireland in Dehradun in February this year remains not only the highest T20 total in India, but the highest in the world. The other 250-plus totals in India have been Royal Challengers Bangalore’s 263 for 5 against Pune Warriors India in IPL 2013, and India’s 260 for 5 against Sri Lanka in December 2017.

Pandey had walked out in the very first over, with Rohan Kadam falling early, but alongside Devdutt Padikkal – who has also been in superb touch – he blasted the Services attack out of contention. The two put on 167 runs in just 83 balls – a rate of better than two runs per ball – and Karnataka maintained that pace through the innings. Padikkal raced to a 32-ball fifty and made 75 off 43, following up from his 122* off 60 in Karnataka’s last game, against Andhra.

But even Padikkal’s charge was put to the shade by Pandey, who smashed 12 fours and ten sixes to make a total of 108 runs via boundaries in his knock. He smashed the last two balls for sixes, ensuring Karnataka hit the 250-mark.

Other T20I stars return to their state sides too

Shreyas Iyer, Shivam Dube and Shardul Thakur all turned out for Mumbai against Puducherry, helping their team to a 27-run win.

Yuzvendra Chahal was part of Haryana’s five-wicket win against Bengal, while Sanju Samson was in the Kerala side that defeated Manipur by 75 runs.

The only players missing in action from India’s T20I squad were KL Rahul, Krunal Pandya and Shikhar Dhawan. The duo of Rohit Sharma and Rishabh Pant were the only T20I squad members who were also part of the Test side, and were thus not available to play for their state teams with the first Test against Bangladesh starting on Thursday.