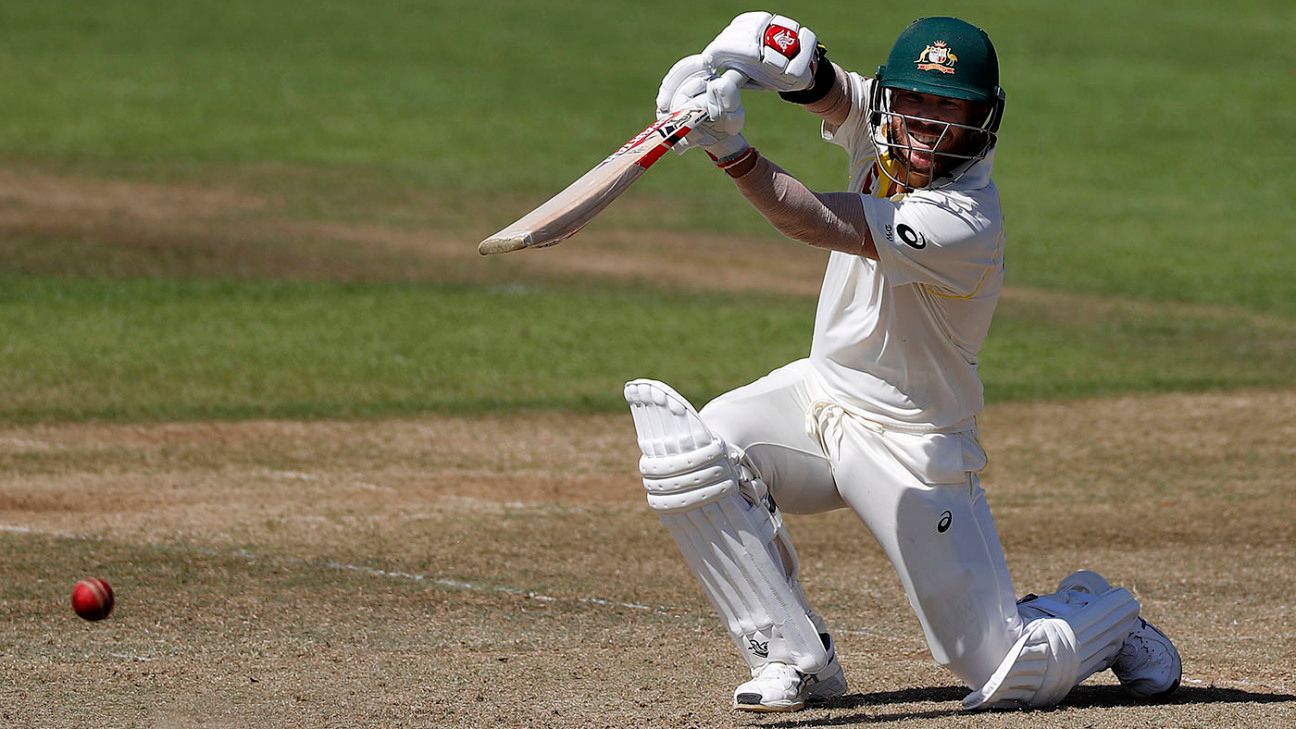 Those two innings were both played by David Warner, six weeks apart, in vastly different circumstances. The first was his battling contribution against India in the World Cup match at The Oval, a source of much criticism that Warner was going too slowly and digging a hole for his team. The second took place on Wednesday at Southampton in Australia’s only pre-Ashes warm-up, on a dicey pitch that offered both vertical and lateral assistance to the pacemen.

While Warner wore plenty of public opprobrium for the India innings, his approach was to reap a strong and remarkably consistent World Cup showing with a trio of centuries. Now, as he turns to act two of Australia’s long tour, Warner has reasoned that very similar tempo will be his best chance to not only contribute to the team’s Ashes bid, but also find himself the Test hundred in England that has eluded him across two previous tours in 2013 and 2015.

Warner has spoken previously about listening to mellow mood music in training to keep calm – and it is a method that will come into its own in the longer form. “Yeah, definitely. That’s probably why I had Lewis Capaldi on my playlist … a bit mellow,” Warner said. “For me it’s about just relaxing when I’m out there. I always am relaxed but I think just at training you try different things and for me it’s working. I enjoy that. The other guys laugh at me but that’s how it is.

“I’m trying to train to get myself ready. I did it at home while I had the time off. I go running with the headphones in and it makes me feel like I don’t want to stop after after I’m a kilometre in. I think when I look back and reflect on how I’ve played over here, I fought hard, in the first innings I think besides one dismissal I got some pretty good balls, and that’s what happens in this game and you’ve got to try to forget about that and don’t overthink it. I know the Lord’s Test I was a bit upset and missed out with [38] and the other boys got 200.

“They’re always in the back of your mind, but now it’s just a bit hungrier and determined to play that longer innings. I think you saw that during the white ball that I hung in there a lot, the old me probably would have thrown the bat at it quite often and today that was all I was focusing on, making sure my feet and my decision making was on point. I was happy with that but I’ve got to try to get those three figures.”

There are other lessons informing Warner’s batting, drawn from his year banned from international cricket for his central role in the Newlands ball tampering scandal. Left with only club cricket to play in Sydney for Randwick Petersham, Warner found himself engaging in a type of cricket foreign to those blessed to play so often on truer pitches, faster outfields and against greater pace on the ball.

“Playing grade cricket at home helped me a lot with patience and having to wait to score,” he said. “The fields they set were very obscure, there was no pace on the ball, regulation balls and they had deep point which was like 10 in front which was very unusual and I asked the guys at the other end ‘how am I going to get behind point’ and I just couldn’t, so I had to scrap and I really enjoyed that. It made me wait for the ball and I had to scrap for those runs. I’ve sort of adapted that out here for that white ball and there it was quite challenging.”

Multiple challenges were created by a Southampton surface that, by Warner’s admission, had its preparation affected by both the Australian desire to see grass on the wicket, a recent lack of rain to provide the ideal amount of moisture, and then rain three days out from the game that prevented the ground staff from being more precise in their work. After 17 wickets fell on day one, a collective batting meeting was held and ideas shared – the sort of collaboration that will be vital to an Ashes win.

“It was just more about assessing how we all went and how we felt. People just throwing up some ideas and there were probably three or four of us who spoke about what our plans were and how we were trying to score on that wicket,” Warner said. “We simply broke it down to … you had to be scrappy, you had to move your feet, commit forward or commit back and you saw a couple of lbws there with guys caught on the crease.

“It was great more for mentality to go out there and switch from white ball to red ball and you couldn’t have asked for more exciting conditions. You are not expecting a wicket to go up, down, sideways and swing. You had five different elements to deal with and I thought it was a great hit out for myself personally and a lot of the other guys as well.”

There were other players, too, who adapted well. Not least James Pattinson with the ball and, late in the day Cameron Bancroft with the bat. The sight of Bancroft mixing with Smith and Warner in public for the first time since South Africa has already generated the odd newspaper headline, and with a few more runs on what will now be the final day of the fixture, the West Australian opener is a strong chance of finding his way into the Ashes tour party.

“You had to have fast feet, energy in your feet and I felt like today was good for me personally,” Warner said. “The intent was good from Bangers too. Marnus in the first innings, he played very well, and I haven’t see much of him in this format and he’s scored a lot of runs in county cricket and he showed just there, if you play the line, and you play and miss, so be it, but he climbed in to it when he needed to and put it away when he needed to.

“You know what he [Bancroft] is like, he scraps away, he’s very good at that. We saw the way he did play out there, he had good intent, he was moving his feet forward and committing. Standing at one [first slip] I was saying this yesterday, I could see a lot of the guys’ techniques from behind the stumps. Everyone is scrapping as hard but I know the bowlers were saying with him, when we put it in our areas you feel like you’re going to nick off a lot of the guys, and for the guys that actually had that attention to detail and adapt, they’ve done very well.”

As for Pattinson, Warner was unbridled in his happiness that this would be the only game of this tour where the Victorian was not on his side. “Facing Pattinson out there, I haven’t faced him in a long time, obviously he’s overcome those injuries which were affecting him mentally,” he said. “It was great to see him come out and bowl the way he has done in the county stuff. To face him there, geez, it’s exciting for us. He put the ball in the right areas, we played and missed a lot. Patto’s length and line was impeccable and I found him very challenging to face.”