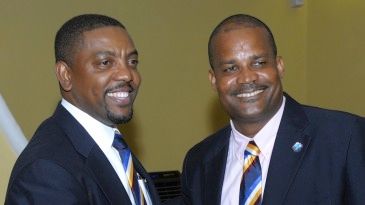 The “insensitivity and stubbornness” of CWI president Dave Cameron have created a poor relationship with West Indies’ players and coaches, according to Ricky Skerritt, who is running against Cameron in the forthcoming CWI elections.

Skerritt, a former cabinet minister for St Kitts and Nevis, also suggested that “relationships with facts and truth apparently mean little to Cameron” and claimed his tenure as president had caused “significant damage” to the board in both financial and reputational terms.

Skerrit was responding to comments made by Cameron, which referred to Skerrit’s four-year spell as West Indies team manager in the early 2000s as “that period of turmoil”.

“While I was team manager there was zero industrial unrest by players,” Skerritt said. “This period was a time when we were still winning more matches than we lost and players were still respected by the CWI leadership. Instead of making such unfounded and petty attacks on me I recommend that Mr Cameron hold audience with former players and ask about their experiences and existing relationships with me. But relationships with facts and truth apparently mean little to Cameron.

“If Cameron wants to talk about turmoil, perhaps he can explain why former head coaches, Ottis Gibson, Phil Simmons, and the several others who Cameron hastily and summarily dismissed, from both the men’s and women’s teams, have collectively cost CWI well over US $1m.”

In 2014, West Indies abandoned a tour of India in a dispute over pay. Two years later, Darren Sammy, West Indies captain at the time, publically questioned the board’s policies in the aftermath of winning the 2016 World T20 in India.

“These tumultuous instances have caused significant damage to the CWI reputation, commercial health, and team performance,” Skerritt said. “Cameron really should not allow the subject of ‘turmoil’ to become the feature of this campaign. Cameron’s pettiness and negativity will not distract us from our forward-looking election campaign.”

Cameron declined ESPNcricinfo’s request for comment. Following the announcement of Skerritt’s candidacy last week, Cameron had questioned his record managing the team between 2000 and 2004.

“Ricky has always mentioned how passionate he is about West Indies cricket,” Cameron told Line and Length. “What most of us remember Ricky for is that period when he was manager of the team, the turmoil that occurred. I’m hoping that we’ll never get back to those days.”

Skerritt is running alongside Dr Kishore Shallow, the president of the St Vincent & The Grenadines Cricket Association, who is standing for the position of vice-president.

The CWI elections take place in Jamaica on March 24. A total of 12 votes, two each for six member territories, are at stake. At present, Windward Islands, Guyana, Jamaica and Barbados all appear to favour Cameron and his vice-president, Emmanuel Nanthan, while Leeward Islands and Trinidad and Tobago appear to favour Skerritt and Shallow.