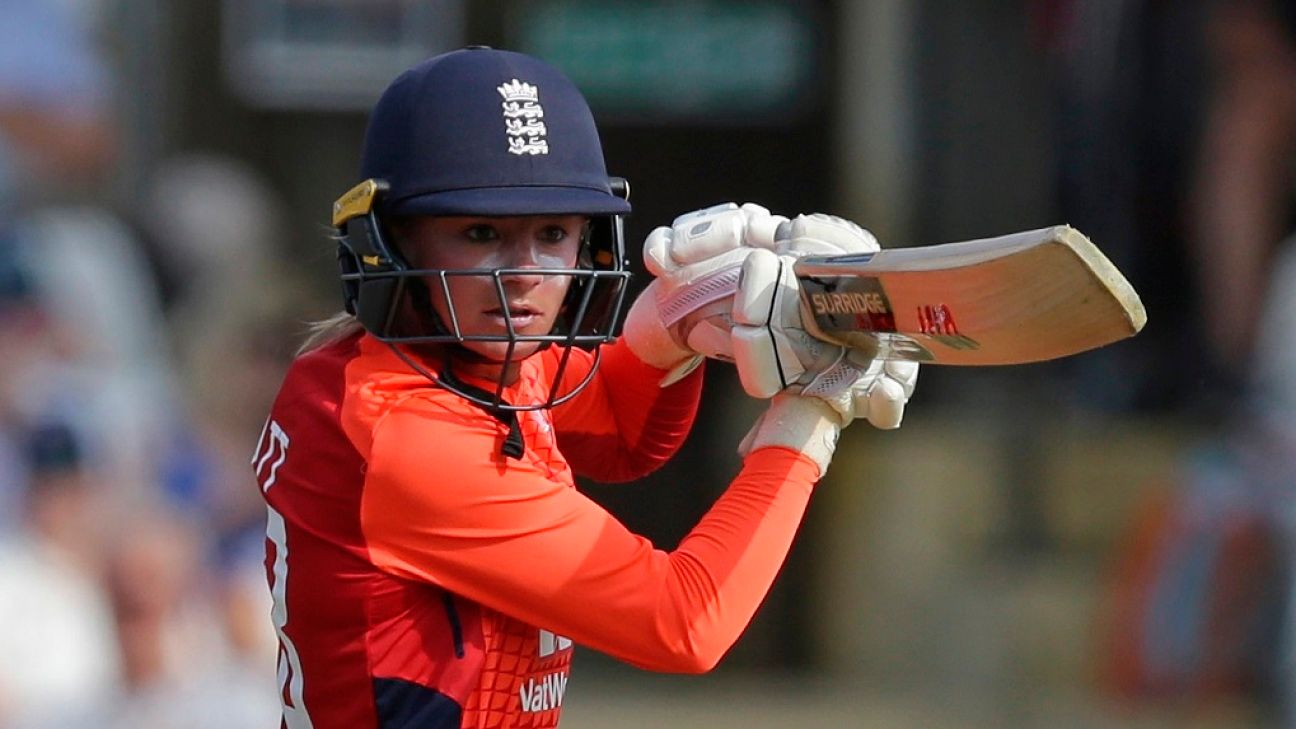 England batsman Danielle Wyatt has owned up to her struggles matching potential with performance in ODIs, having put those concerns to rest briefly with her maiden ODI fifty in her 63rd appearance in the format, against India last week in Mumbai.

Wyatt reached the milestone a game after she was dropped from the starting XI, in the second ODI, after which England captain Heather Knight explained the decision was based on Wyatt’s inability to “transfer” her explosiveness in T20s to the longer format.

“I was aware she said those comments,” Wyatt said of Knight in Guwahati on Wednesday, having helped England to a 1-0 lead two days before in the ongoing three-match T20I series with an 89-run opening stand alongside Tammy Beaumont. “But it’s probably fair enough. It’s taken me 60-odd games to make my first ODI fifty, which is frustrating.

“I’ve shown my talent in the T20 game. It’s just a matter of showing what I can do in ODIs. So to get that first fifty and help us win that last ODI was a bit of a relief, really. Hopefully that’s a start to more runs to come [in the format].”

After England’s loss in the second ODI, Knight had underlined that dropping Wyatt in favour of Lauren Winfield wasn’t a decision based solely on Wyatt’s 6-ball 1 in the first ODI.

“Danni’s been slightly upsetting the way she’s been getting out,” Knight had said after England’s 66-run defeat in the second ODI. “She’s been outstanding in T20 cricket. She’s become one of the best T20I cricketers in the world, but she hasn’t quite managed to transfer that into ODIs yet.

“She’s had a lot of opportunities and she has a lot of talent. We set the challenge for her to try and be the best finisher in the world in ODI cricket. She hasn’t shown that yet… the way Lauren has played in the nets, she’s put pressure on Danni for us to pick her ahead of Danni.”

The punt worked in England’s favour to some extent with Winfield making an enterprising 49-ball 28 to help arrest a collapse in the company of half-centurion Natalie Sciver although England lost the game and the series. Had it not been for an injury to left-arm spinner Sophie Ecclestone, though, Wyatt may not have figured in the starting XI in the series ender, where she scored her maiden ODI half-century to deny India a 3-0 whitewash.

Mark Robinson, the England head coach, echoed Knight’s assessment of Wyatt’s struggles to deliver on her promise as a potent ODI batsman.

“Danni is incredibly frustrating and immensely talented, and a pleasure to be around at the same level,” Robinson told ESPncricinfo. “She’s got all the skills and attributes, but sometimes it’s about joining it all together. When we left her out, I said to her, ‘You’re too good not to be in this team.'”

“It’s just that she needs a little bit of extra control at times. We don’t want to put shackles on her because she’s such a naturally talented ball-striker.”

Robinson also underlined that as with every other member of the England women’s squads, Wyatt’s job in the two limited-overs sides has been clearly outlined and explained to the 27-year-old batsman.

“Her job is to win games for England, her job is to finish games off,” Robinson said. “And at times to accelerate the scoring rate, take risks at times, at times is to sit in and stop the bleeding, and that’s what she must do when batting at No. 6 and 7. The more she does that, she won’t be out of the team. That’s the message.

“At the top of the order [in T20Is], she must play with freedom and take on the Powerplay and the best bowlers in the world, and occasionally play with control so we can make sure we convert good scores into big scores”.

Wyatt said the challenge for her to attune her style of play to the two formats was more mental than tactical, and that she was aware of the role her coach and captain required.

“It’s all in the head,” Wyatt said. “[In] T20, just go out there. My job at the top of the order is to explode from ball one, really, whereas in ODI, you’ve got a lot more time to think. It’s more about knocking the ball around.

“What the coaches have said is they don’t want me to lose my aggressive play – the way I play. In that first ODI, I guess that loose shot from me… [I] probably deserved to get dropped in the second ODI, but [I] bounced back in the last game.”

Heading into the second T20 in Guwahati, which will be played on a different track at the Barsapara Cricket Stadium, Wyatt said an encore of her blinding 124 against India at the Brabourne Stadium in Mumbai last year may not be too far away. In her three appearances for England on this tour, she has made 1 and 56 in the two ODIs, and fell for a brisk 35 in the first T20I.

“I want to perform in every game, every time I play for England, “Wyatt said. “Obviously, I’ve got that 124 at the back of my mind, in Mumbai. I know I can do that [here]; it’s definitely that [kind of] wicket. Hopefully in the next two games I can get as many runs as I can.”