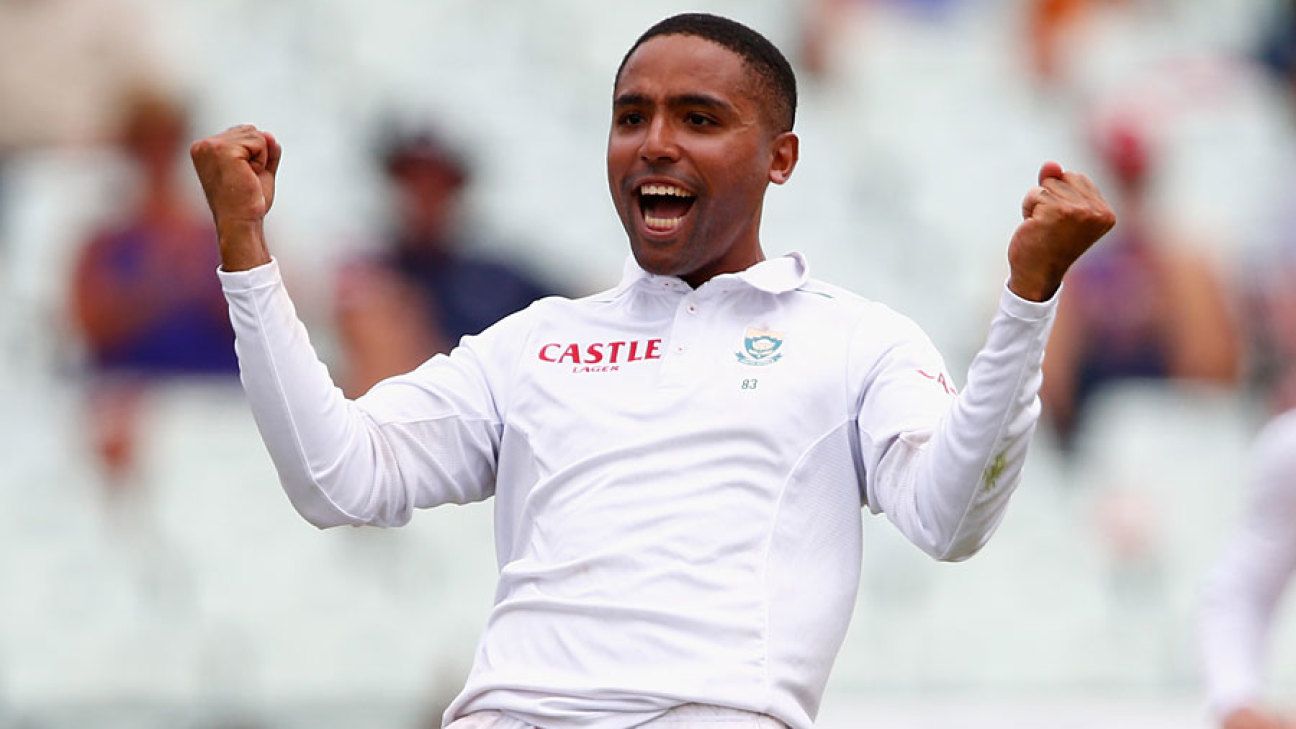 A career-best match haul of 13 for 141 from Cape Cobras captain Dane Piedt helped his team maintain a slim lead at the top of the points table after the penultimate round of the 4-Day Franchise Series in South Africa.

Piedt was in the wickets with his offspin from the first innings of the match in Oudtshoorn, skittling the middle and lower order to pick up 6 for 75 as Titans reached 275 after choosing to bat. A 135-run opening stand between Simon Khomari and Pieter Malan helped the Cobras secure a 100-run first-innings lead, and Piedt pressed home the advantage in Titans’ second innings.

Opening the bowling on a pitch offering generous help for the spinners, he collected 7 for 66 in 28.1 overs, while George Linde bowled 30 overs of left-arm spin and Andrea Agathangelou‘s 84 provided the only resistance as Titans were bowled out for 151. That left Cobras needing 52, Zubayr Hamza’s unbeaten 26 seeing them to an eight-wicket win with a day to spare.

That result opened up a significant lead of more than 25 points at the top for Cobras, but Lions narrowed it to just over three points with their sixth win of the competition. Lions’ eventual five-wicket win over Knights at the Mangaung Oval in Bloemfontein was built on sterling performances with both bat and ball: Wiaan Mulder, Kagiso Rapulana and Nono Pongolo all achieved career-best performances with the bat, while left-arm spinner Bjorn Fortuin collected his best ever first-class figures.

Fortuin’s 7 for 70 meant meant Knights could only reach 357 despite a strong start from their top order. Rapulana and Mulder’s centuries – their highest scores in franchise cricket – and Pongolo’s maiden franchise fifty opened up a 133-run lead, and Pongolo’s 4 for 49 in the second innings tipped the balance further. Lions made heavy weather of a second-innings target of 76, losing five wickets, but Dominic Hendricks’ 49 not out saw them home, and closed the gap on Cobras.

Meanwhile, bad weather seems to be following Dolphins around. Last week, rain washed out much of their match against Knights in Pietermaritzburg, and inclement weather also forced a draw in their game against Warriors in East London.

After captain Jon-Jon Smuts won the toss and opted to bat first, Warriors made a strong start thanks to centuries from Edward Moore and Yaseen Vallie, declaring their first innings at 436 for 7. Having conceded a first-innings lead of 118, Dolphins clawed back thanks to seamer Eathan Bosch, whose 4 for 36 reduced Warriors to 163 for 9 in their second innings.

That was the score on which they declared for the second time in the game after play on the final day only got underway after the lunch break with bad light playing havoc with the day’s action. Set 275 to win, Dolphins were kept ticking by Marques Ackerman‘s rapid 77 and had reached 171 for 5 in 30 overs, with a possible 22 overs left in the day, before the weather closed in once again to force a draw.

On the national radar

As South Africa continue to consider their all-round options in both the Test and limited-overs sides, Wiaan Mulder’s career-best 146 and cheap second-innings wickets will not go amiss. Temba Bavuma‘s impact with the bat in the same match was modest – he managed 30 in the first innings and 6 in the second – while Zubayr Hamza returned to franchise cricket after his Test debut against Pakistan with scores of 28 and 26 not out in Cobras’ win.

Dane Piedt now sits comfortably at the top of the competition bowling tables after his 13-wicket match haul took him to 52 in nine games this season.

Piedt has led Cobras with aplomb this season, as well as recording both his best figures in an innings and his best-ever match haul. He also struck his maiden first-class century against Knights in Bloemfontein to kick off the new year, and if Cobras can maintain their slim lead over Lions, he will have some silverware to cap what has been a brilliant season.