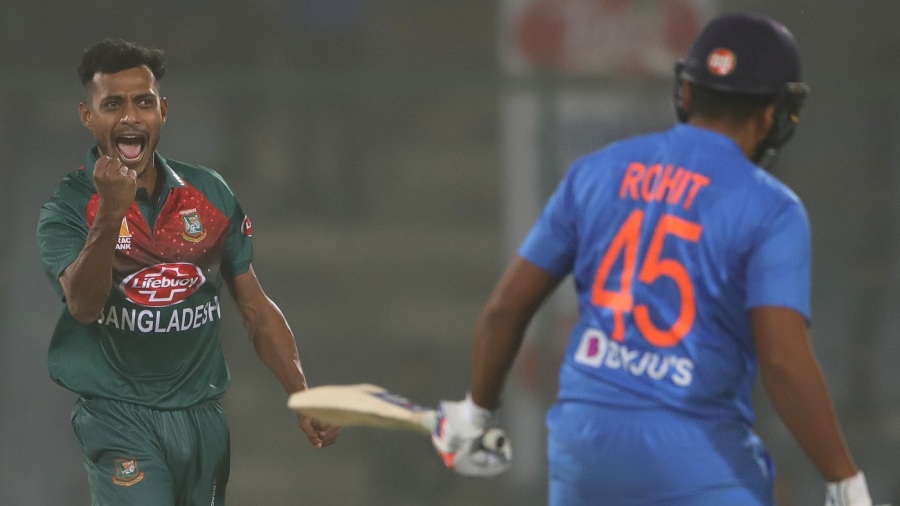 After weathering several metaphorical storms and then a pollution hazard, Bangladesh are heading to Rajkot with a 1-0 lead. Still, their days aren’t getting brighter in a hurry, and this time it is more literal: the threat of Cyclone Maha looms over the second T20I.

But perhaps they won’t mind it as much as India, who, it can be argued, played on a surface that was patently more suited to Bangladesh’s strengths than to those of their stroke-makers in Delhi. Rajkot is unlikely to produce anything like the slow burner at the Kotla, and a rain-affected T20I could further alter the dynamics as they look to pull level. One way or other, it will both test a side with a few newcomers, as well as offer opportunities for many of them.

It is far-fetched to say that the visitors come in as favourites, or even that they are the more confident side heading into this fixture. But Bangladesh have just beaten India for the first time in the format, and they have done it without Shakib Al Hasan, without Tamim Iqbal, and for the first time in their history, without even a left-arm spinner in the XI. Anything is possible.

There is hardly a series where Rishabh Pant isn’t in the spotlight. Pant has been an international cricketer for just over two years, and in that time he’s simultaneously been perceived as the most exciting prospect and the most frustrating talent. Consequently, he’s over-discussed, over-advised, and for much of the last few months, it looks like he’s been overthinking. Yuvraj Singh noted recently that the youngster is a top-order batsman who is being forced to turn into a middle-order batsman, and in a more indirect sense, Adam Gilchrist echoed Yuvraj, saying Pant should focus on being true to his game rather than try to be the next MS Dhoni. Perhaps those strong words from similarly swashbuckling left-handers could spark something for Pant, who hasn’t made a 30-plus score in eight innings across formats for India. That, or the fact that India have two keeping options in this squad.

The Bangladesh Cricket Board’s mandate that BPL teams must compulsorily field a legspinner who bowls four overs was a move to give their batsmen practice against that kind of bowling. Twenty-year-old Aminul Islam looked a good prospect not just for that, but also proved a handful for India on his debut in the first T20I. Aminul accounted for a shaky KL Rahul and was immediately under attack from Shreyas Iyer, who struck delightful sixes with the turn to put him under pressure. He endured with his flight and loop, however, and had Iyer eventually. His next challenge in international cricket will be a lot harder.

India could stick to the same team, and it would be a superior batting line-up at this particular venue. Manish Pandey is considered a middle-order option, and so could remain on the bench as both Krunal Pandya and Shivam Dube offer bowling options. Arguably, the only spot available for a batsman is in the top three, where Rahul is both an opening option and a No. 3. Top-scorer in the last match, Shikhar Dhawan is unlikely to be dropped and Sanju Samson might fancy his chances if Rahul goes out. Khaleel Ahmed was expensive at the end in the first game, and the experience of Shardul Thakur could be tempting for India.

Bangladesh could well go in with the same line-up too. They used eight bowling options in Delhi and one of them was Soumya Sarkar, who bowled two overs. If they do indeed consider him a seam option, they could think of bringing left-arm spinner Arafat Sunny in place of a frontline seamer. That would give them three offspin options, one orthodox left-arm spinner, one legspinner, and three seam options.

The India met department tweeted that the cyclone would weaken as it approached Saurashtra at noon on match day. It is expected to be cloudy throughout the day and there is a chance of thunderstorms in the evening, though.