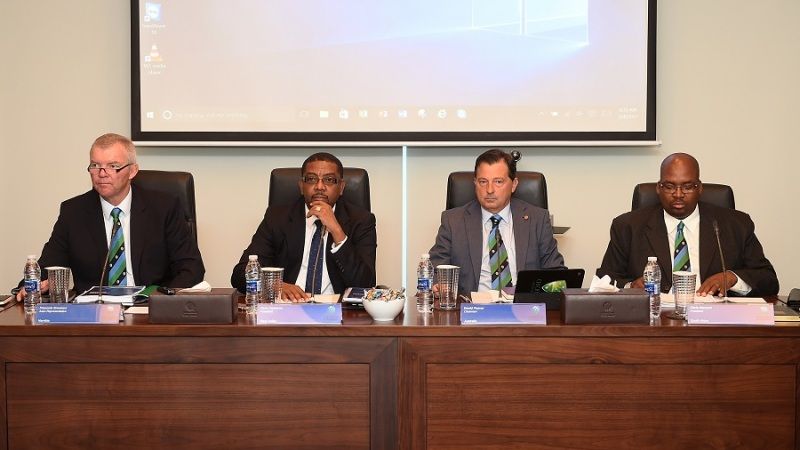 Cricket West Indies (CWI) has been asked to “rescind” the appointment of Richard Pybus as national coach, with the Leewards Islands Cricket Board (LICB) saying he was “handpicked” by Dave Cameron, the CWI president, through an “unacceptable” process.

“It is unfortunate, unacceptable and unethical for the CWI President to single-handedly recruit a person of his choosing, and to proceed with salary negotiations without the prior knowledge of the Board,” the LICB email, signed by its directors Enoch Lewis and Denrick Liburd, and accessed by ESPNcricinfo, said.

The LICB asked for a response from CWI by the end of Tuesday. ESPNcricinfo understands CWI did not meet that deadline, but a response will be sent next week.

According to the LICB, one of many members that make up CWI, Cameron announced Law’s resignation at a board meeting on September 22 and said he would leave by the end of 2018. Jimmy Adams, the director of cricket, was then asked to present a list of potential candidates from within the Caribbean who could perform the role of interim head coach while a process to appoint a long-term coach was put in place.

Adams shortlisted Pothas based on recommendations from Law and Jason Holder, West Indies’ Test and ODI captain, who wanted “continuity” and stability in the coaching staff. The CWI board agreed, putting Pothas in charge while also advertising for long-term candidates. Adams, the LICB pointed out, had already penned a five-step process to hire the new head coach.

According to the LICB, Adams also recommended that Pothas work alongside Law in Bangladesh to get acquainted with the increased workflow. However, on September 26, the 17 directors that comprise the CWI board were told that Law was resigning at the end of the India tour and wouldn’t be going to Bangladesh. As a result, Pothas, who was due to take charge only in January 2019, and work through till September, was pressed into the job two months in advance.

Also, CWI was yet to finalise a compensation package for Pothas. On November 28, Cameron told the CWI board in an emergency teleconference that Adams had left for Bangladesh to conduct negotiations. Eventually, a one-time offer of USD 12,500 per month was made to Pothas, who “countered” by asking for USD 22,000 (the amount CWI paid Law for his services).

According to the LICB, CWI had “blundered” by not entering into “good faith negotiations” with Pothas before he took over as interim head coach. “The president, Dave Cameron, reported that he received an email from Mr. Pothas in which the interim Head Coach sought to justify why the job was worth more than the CWI’s offer of $12,500, and made the determination that the matter was at a stalemate. Discussion with Mr. Pothas was then terminated.”

Cameron then told the CWI directors that he got in touch with Pybus and “concluded a deal, including a salary of USD 16,000 plus other unspecified benefits to become the next interim head coach.”

The LICB cited “grave concerns” that Cameron went to Pybus without seeking inputs from Adams, the cricket committee, the technical cricket committee or the CWI board. It also pointed out that the salary given to Pybus was “significantly” higher than Pothas’.

At the quarterly CWI board meeting, when Pybus’ appointment came up for ratification, the LICB directors objected strongly. They said Pybus had not “formally expressed an interest”, had “limited” experience considering he hadn’t coached an international team in five years, and had not been part of Adams’ shortlist of candidates.

While noting that Cameron’s decision received “majority” support from the 17 CWI board directors, the LICB called the issue “divisive.”

“While the recommendation piloted by the President to hand-pick Mr. Pybus eventually received majority support at the meeting, the records would show that the handling of this matter provoked heated debate and proved a very divisive issue amongst the Directors. This is evidenced by the equal split of votes amongst Directors from the shareholder territories. This is a clear indication that there are concerns.”

As a way forward, the LICB suggested negotiating a new compensation package with Pothas, who it said should continue as the interim head coach until September 2019. It also made the “demand” that “the recent decision to hand-pick Richard Pybus as interim Head Coach be rescinded.”