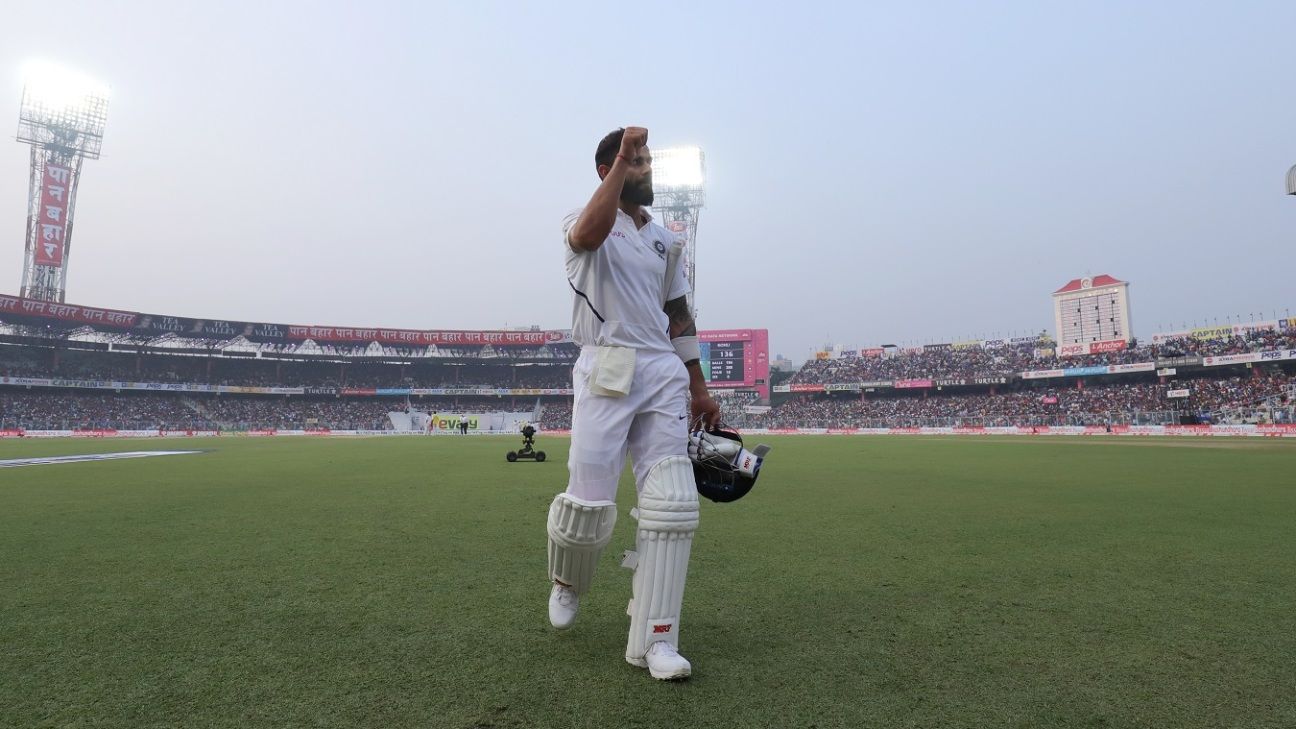 Virat Kohli has urged India to replicate the Test-match stadium experiences for spectators in other countries, saying “small things” like play areas for children could help keep the audience engaged throughout the day. India’s Indore and Kolkata Tests against Bangladesh were both played in front of strong crowds, but as things stand, they will not play a Test at home till their five-match series against England in 2021. That time could ideally be spent shoring up the marketing around Test cricket, and Kohli said it would take more than just the players to keep people coming back.

“I think it is very, very crucial to market Test cricket like we do for T20 and one-day cricket,” Kohli said. “Because it is not only the job of the players playing, it spreads out to the management, to the cricket board and to the home broadcaster as well – of how you portray a particular product to the people. If you create excitement only around T20 and not so much around Test cricket, then in the psyche of the fan there’s already a certain template that’s established. So I think if there’s enough buzz created around Test cricket, then there will be a lot more keenness to come to the stadiums.

The pink-ball Test in Kolkata drew more than 40,000 people on the first two days, at least some of which can be attributed to the novelty of India’s first day-night Test. Eden Gardens has also been a stronghold in Indian cricket, and large crowds are something of a given every time a Test is scheduled there. However, in various other parts of the country, stadiums are not as easy to fill. Rahul Dravid echoed myriad voices recently when he said that better basic facilities for spectators should be the top priority. Kohli said he would add crowd interaction to that list to enhance the experience of a Test match.

“I am a big fan of having more interactive areas for people during the game, like you have in venues when we play abroad,” he said. “There’s something or the other always happening – maybe a play area for kids. These small things will really, really help.

“Maybe school kids could interact with team India players during lunch or be on the field, play with them, like we see in other countries as well. I think all these things will really bring the strength into Test cricket and people would want to come and have an experience of a Test match. It should be an event where you come and experience Test cricket, not just sit there and watch in the hot sun. I think there has to be more for the fans, I totally agree with that and it has to be marketed well.”

Among the more famous innovations at cricket grounds recently is the pool deck at the Gabba in Australia. Australia and South Africa also have pink Tests that involve efforts from the spectators, and venues in New Zealand and England are also open to allowing children to play inside the stadium premises – sometimes in the ground itself during a session break. India’s stadiums afford little movement to spectators, and rarely allow them to bring in food. Water bottles are effectively banned in all parts of the country, but this is more of a crowd-control measure. As such, there is little to keep a fan entertained if the cricket itself is not stirring. With India scheduled to play only limited-overs cricket at home for the next year or so, Kohli spoke of the need to focus on these innovations specifically for Tests.

“Again, it has to be planned in a way…marketed in a certain manner, whenever Test cricket comes back home,” Kohli said. “There has to be enough anticipation. And I hope these small changes that I spoke of, they’re only kept specifically for Test cricket. Because in one-day and T20s, you don’t need more interaction for the crowd. They’re already looking forward to slam-bang cricket and there’s so much happening on the field. But when there’s a session when there’s not much happening, what do they do between breaks? There also has to be more interaction for the fans [during that period]. That’s what I think.

“I’m sure if those things are added, it’s an added bonus to boost Test cricket. The pink-ball Test is a beginning, I’m sure these things will be planned more often. That buzz will be created again in different parts of the country as well. So yeah, these are a few things that I think can help. Dada has been very open and welcoming of all viewpoints that I discussed with him and to understand what point of view we have as a team. And his vision is also in sync. So he’s also doing things for the betterment for Test cricket, firstly. And in return, Indian cricket will be stronger. So I think we’re walking in the right direction, and I think under him we’ll see a lot more positive changes which will be cricket-specific, and priority will be given to Test cricket.”

On the topic of Test cricket’s health and appeal, which Kohli has been talking about throughout the series, he suggested that the World Test Championship system might also need some tweaking. A home-and-away format, Kohli said, would be more reflective of the stature of a team. At the moment, India have won all seven WTC matches, three series, and have only played two Tests away from home. Their biggest series of this WTC cycle will only come at the end of next year with a four-Test series against Australia.

“I think a more balanced format would be – one series home, one away,” he said. “We’re playing very good cricket but we’ve played only two Tests away in the WTC. And you’re talking about an Ashes where we saw the level of cricket and the intensity at which those series were played. Pakistan is playing Australia for the first time in Test championship. So it is very tough to judge a team. You can praise our team on the performance, yes, but to say that we’re dominating like no other team is a very subjective thing to say.

“We’ve played three series so far. If by four series it was two home, two away and we had 300 points, then you can say we’re playing really well. We are definitely playing good cricket but I don’t think there should be any kind of tags attached to any kind of teams. In the WTC, even if we make the finals, there’s only one game. So whoever plays well [in that match] wins the championship. So it doesn’t matter how many points you have at the end of the day, you’ve to play good cricket to win. A good format would be one home, one away and we keep that balance and keep moving forward.”