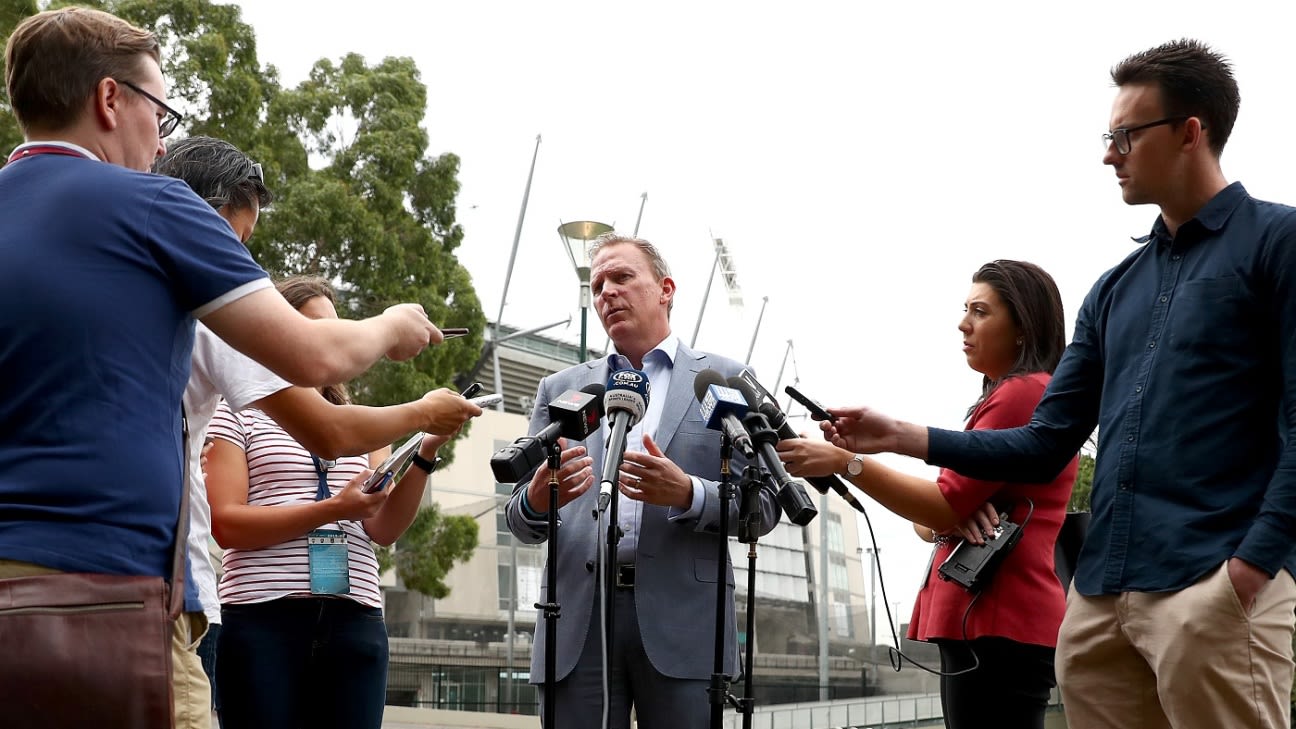 Kevin Roberts, the Cricket Australia chief executive, has given no indication the governing body will rethink its drastic cuts to the salaries of staff who have been stood down, even though he apologised to employees for the way the decision was communicated.

As the CA chairman Earl Eddings and fellow director Paul Green prepared to present to their state association owners and players union partners on Thursday, Roberts addressed all staff via videoconference and stated his regret on behalf of his executives. Nevertheless, he appeared determined not to make any material changes to a model that saw some 200 staff stood down on 80% pay cuts while executives and the remainder of staff remained at work on 80% of their regular pay.

Mounting anger at the way that CA has handled the switch from a position of absorbing the Covid-19 pandemic shocks within the business and making deep cuts to staff pay, state association grants and revenue projections for the players under the governing body’s MoU with the Australian Cricketers’ Association has forced Roberts to address staff directly. Meanwhile, the sense of anger and distrust has compelled Eddings and the board to deal urgently with their owners and partners.

Questions from staff to Roberts are believed to have referenced issues around the way the stand downs were handled, with staff given only a brief period to agree in writing to the move, while the chief executive is understood to have claimed that CA should have shared more information about its finances sooner.

These details, when shared with the states and the ACA, will be a matter of interpretation as much as they are numbers in black and white. Roberts had previously stated that CA, with average monthly revenue outflows of between A$30 million and A$40 million [US$19.5 to 26.1 million approx.] for the year, was looking at being down to A$40 million in cash by August, a level of reserves deemed insufficient given the uncertainties ahead due to the pandemic.

However, it appears almost impossible that CA’s cash position can get any lower than A$40 million, given scheduled arrivals of ICC disbursements in July, sponsor fees in July and August, and instalments from broadcast rights deals with Fox Sports and Seven domestically in September and from Sony for international rights in October. Added to CA’s investments and the debt facility secured from banks, the governing body may be looking at having more than A$200 million [US$130.5 million] available at precisely the time Roberts warned it was in danger of going broke.

It is that wide variation that has caused states to ask for as much financial detail as possible, with the underlying truth that ultimately the associations of New South Wales, Victoria, South Australia, Queensland, Western Australia and Tasmania would be required to prop up the central governing body in the unlikely event that it did become insolvent.

Despite a longstanding drift towards the centralisation of decision-making, allied to a move to a financial model in which they received annual guaranteed grants in exchange for a loss of direct representation on the CA board, the states remain in possession of reserve powers over the composition of the board and – should they so wish – a revision of how it is constituted.

As sporting governance experts Colin Carter and David Crawford stated in their 2011 review that led to the current board and financial models: “Under our recommended model, the States will control Board appointments and, if there is reason to do so, can at any stage dismiss the Board. That is the States’ protection. And we also find it difficult to imagine that the CA Board would fail to understand that adequately funding the State structures and teams and recognising existing stadium commitments is in the best interests of cricket. As the AFL Board seeks to protect the viability of its own shareholders, so we would expect that cricket’s leaders would do the same.

“The simple solution is also the right one. The Board should be free to allocate cricket’s resources and there should be no pre-conditions other than ensuring that each State should be provided with an agreed level of funding that will enable them to fulfil their role.”