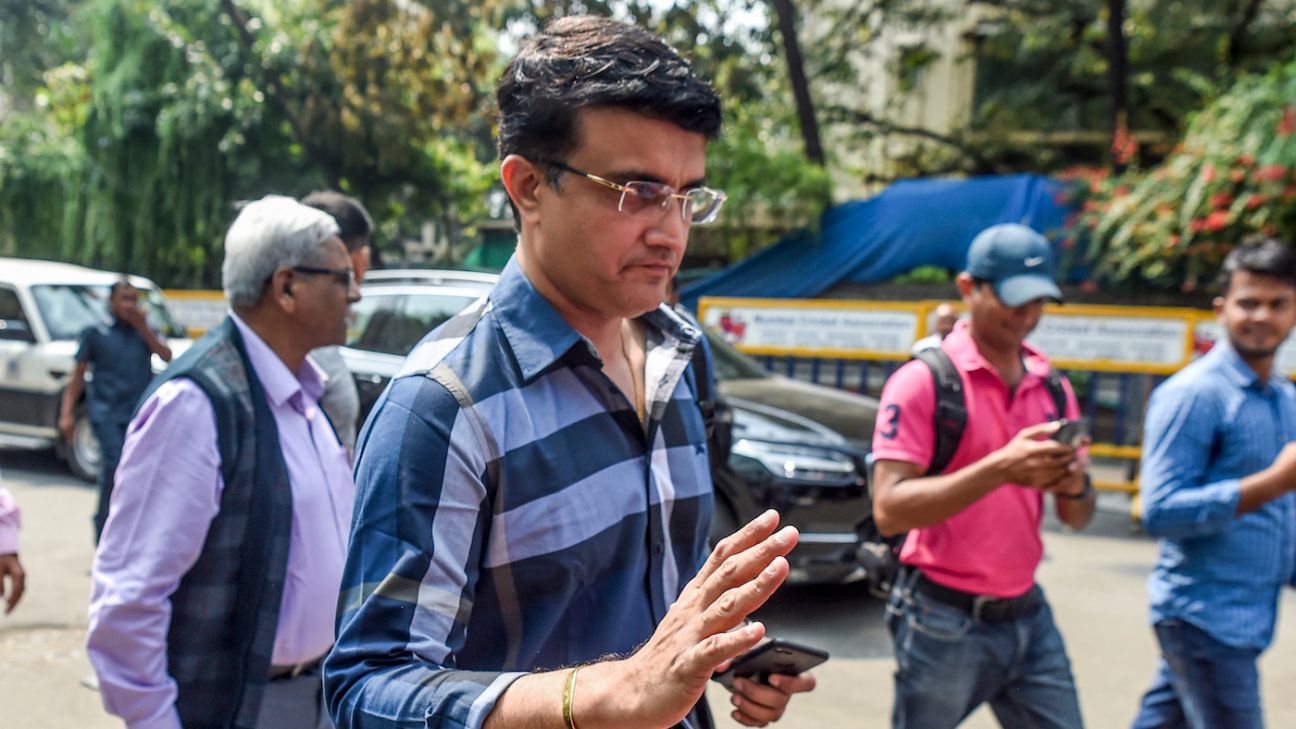 Speaking publicly for the first time since being picked as the unanimous choice for the post of the BCCI president, Sourav Ganguly has pointed out that the conflict-of-interest matter that has been cropping up often in recent times is a “very serious issue in Indian cricket.”

Ganguly himself was pulled into the conflict-of-interest issue for his role as a commentator, for being part of the BCCI’s Cricket Advisory Committee (CAC) and for being on the coaching staff of the IPL franchise Delhi Capitals. Ganguly had expressed his displeasure towards the conflict rule in the new BCCI constitution which asks one person to hold only one post in Indian cricket.

“Conflict [of interest] is an issue. Whether you will actually get the best cricketers in the [BCCI] system, I am not sure because they will have other options to avail,” Ganguly said outside the BCCI headquarters in Mumbai on Monday after filing his nomination. “Because if they come into the system and not get to do what is their livelihood, it is very difficult for them to be part of this system and make a difference.

“So that’s one issue which really needs to be looked at. Look at all the appointments that have happened in various forms whether it is the NCA (National Cricket Academy) or CAC or the appointment of batting coaches, fielding coaches, there has been issue with everything…commentators, IPL. This needs to be sorted as it is another very serious issue in Indian cricket.”

Another issue Ganguly said that would be on his priority list would be to relook at the revenue share the BCCI gets from the ICC, which was reworked as part of the new financial model in 2017. “That’s one area, we will have to take care of it because we have not received any money in the last three-four years from the ICC,” Ganguly said. “Money in the sense what you deserve because India generates 75-80% of the (global cricket) revenue, so that is going to be one of the big agendas. Talks and discussions need to happen and we need to find a solution because this is not leading anywhere.”

Ganguly also reflected on the state of Indian cricket administration and how it was an “emergency kind of situation in the BCCI in the last three years”. He hopes the new administration can bring normalcy back in the board in the coming months.

“It’s a very important time in Indian cricket administration because of what all has happened in the last three years. To be in a position where I can make a difference along with the [administration] team would be extremely satisfying so hopefully in the next few months we can put everything in place and bring back normalcy in Indian cricket.

“It’s very satisfying [to be picked as the new president]. It was almost an emergency kind of situation in the BCCI in the last three years. The members overcame that and the eight names that have been announced, we wish to bring BCCI back to normalcy. But there’s a lot of work to do. Indian cricket, especially administration, has to be the best in the world and that’s how it has been over the years.”

As the October 23 BCCI election day approached, there were several reports about who would be elected as the new board president, led by the names of Ganguly and Brijesh Patel, the former India batsman and Karnataka State Cricket Association secretary. There were also reports of former BCCI presidents N Srinivasan and Anurag Thakur being indirectly involved in the elections by wanting their preferred candidates in the board. Ganguly, however, clarified he had not expressed his aspirations to become the new board chief nor had he been approached by any politician.

“I had never expressed my aspirations for this position,” Ganguly stated. “There were senior people in the BCCI. I never spoke to anyone, I never expressed that I was keen. Ninety per cent of the representatives in the BCCI currently are new, absolutely new. The way the current constitution is framed, a lot of people are tentative to even decide on positions in the BCCI because if it’s not good enough and if it’s not a position where you can work and make a difference, you wouldn’t want to be a part of it because they lose their state associations position.

“There are a lot of issues which are very complex and complicated which actually are different from what ground-level work is. Till 10.30 in the night [on Sunday] I was not aware of this, till I was told that I need to be the president and take this association forward with Jay [Shah, the new BCCI secretary] and Arun [Singh Dhumal, the new treasurer] and the vice-presidents and the apex council members and Jayesh George, the joint-secretary. I felt it was a great responsibility because even when I became captain in the year 2000, there were issues going around. It’s always great to be looked at as someone who can do things in difficult situations and hopefully I can deliver.”