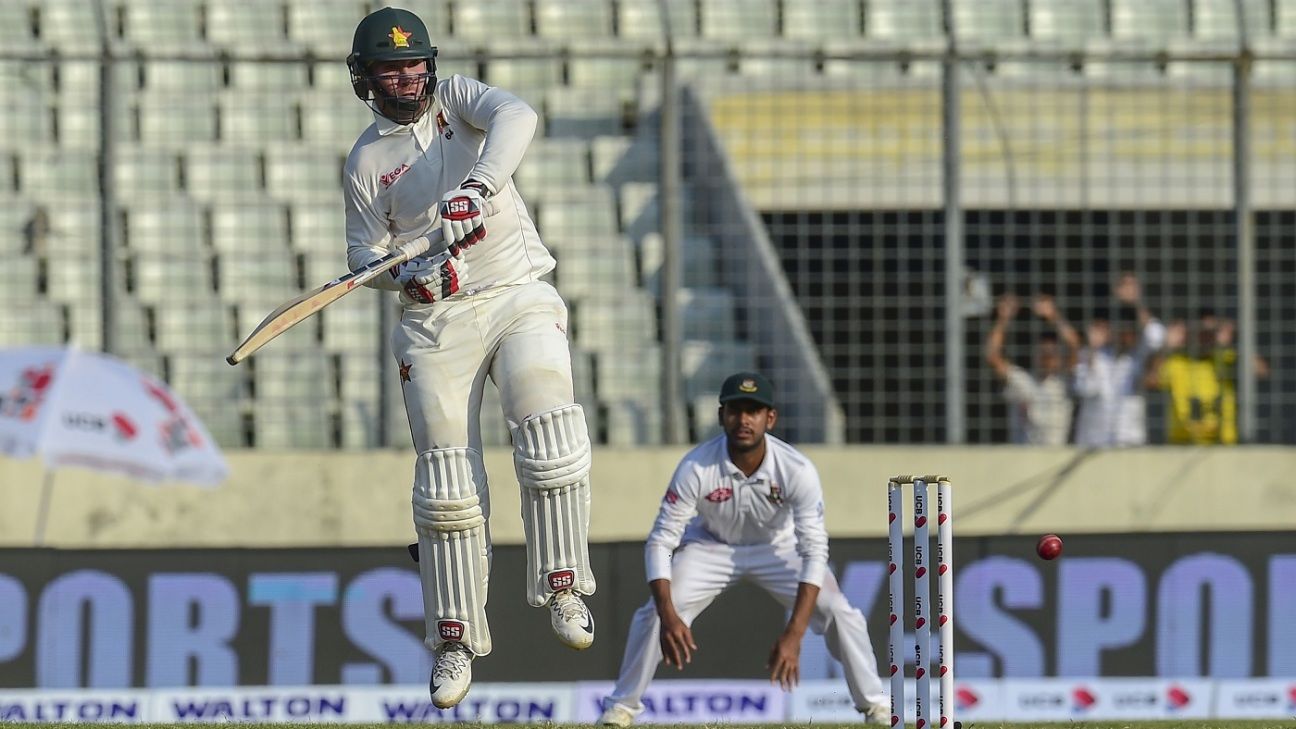 Lalchand Rajput knows a thing or two about saving games in the subcontinent. His 20 first-class hundreds, and an average just a shade under 50, attest to his knowledge of these sorts of conditions from his playing days, and indeed, his very first Ranji Trophy ton was scored in the fourth innings of a match at the Wankhede Stadium in Mumbai.

As Zimbabwe face a mammoth task of batting out the fifth day to save a Test match in Dhaka, their coach offered a blueprint for survival. First, Rajput turned to recent history for an example of what is required. In October, Australia were faced with a similarly daunting task in the first Test against Pakistan in Dubai before Usman Khawaja’s ton (and Nathan Lyon’s pluck) secured an unlikely draw.

“Cricket is a game of uncertainties,” began Rajput’s rearguard disquisition. “You never know what will happen. It just takes one or two big partnerships. It’s happened. If you look at a game like Pakistan/Australia, they really saved a Test match. Khawaja batted the whole day. So we hope somebody stands up and bats a session, because it’s just a question of three sessions. If you can bat one session, then slowly we can [do it].”

There’s a little more grip in the Shere Bangla surface than there was in Dubai, but Rajput’s advice to his batsmen was to put the wearing track out of their minds and play each ball on merit. “We don’t think about the pitch now,” he said. “You just have to go to a mindset that you play on the merit of the ball. The pitch is not in our control, it’s uncontrollable, so back your defence, back your instinct, play the ball on merit. If the ball pops up or something, it’s unfortunate, but at least you’re there to try and defend.”

Led by Mushfiqur Rahim behind the stumps, a chorus of close-in fielders will constantly remind the visiting batsmen about the deteriorating strip tomorrow and here, Rajput explained, was where the mental aspect – concentration, and the ability to tune out fears and distractions – would be key.

“Definitely any team will try and put pressure on the batsmen with close in fielders,” he said. “Some odd balls are jumping, it’s turning, and on the fifth day you can’t expect a true wicket. But that’s the skill level, that’s the mental aspect of the game. You’ve got to be really prepared for that. Whatever happens with that ball, you’ve just got to forget and keep on concentrating on the next ball. It takes a lot of character. If you show that character, only then you can survive in Test cricket. We all know that Test cricket tests the character of a player, and that will really test our character.”

Certainly, he warned, they should avoid thinking about what’s at stake here: their first away series win in almost two decades. “I’ve got to be positive and make them feel that it’s just another game. Don’t give that notion that we’re going to win the series if we draw, no, because that adds additional pressure on them. It’s just another game, you’ve got to go and show your skill level and try to bat the day.

“The main thing is cricket is played nine inches above the shoulders. This is very, very important. They have to be really calm. They have to be really tough and go through those critical moments. There will be a phase when the bowlers are on top, and you have to respect that and go through that grind that shows that toughness. At the end, you’ve got to back your game. You’ve got to be confident about your defence and your shot selection. You’ve got to keep it very simple, and not think too much. If you keep it simple, then you succeed.”

Rajput advised that insurmountable problem can appear much more achievable if it’s broken up into lots of little challenges.

“Have small sessions, one hour and then the lunch break,” he said. “And then concentrate for another hour. Small sessions will do a world of good for us. The first hour will be very key. If Brendan [Taylor] and Sean Williams can bat through that, then the pressure will be on the fielding side. And if we play the first session, then it becomes easier for the next two.”