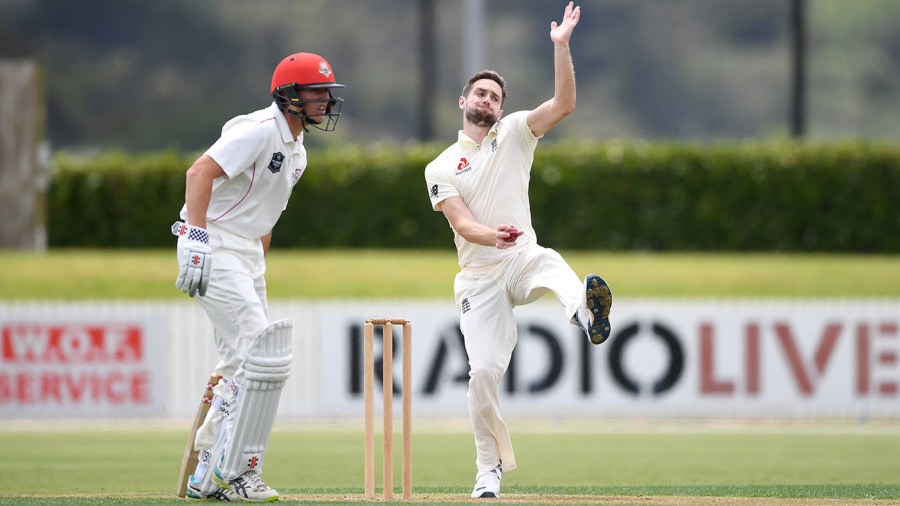 England face a choice between Chris Woakes and Sam Curran for the final place in their XI for the first Test against New Zealand.

With the remainder of England’s plans falling into place, it seems the only decision left for the team management to make is who should operate at first change and bat at No. 8 in the Test team.

It was hard to pick between the pair on Wednesday. There was little movement – off the pitch or in the air – for any of England’s bowlers on the second day of this game with two young New Zealand batsmen, Finn Allen and Jakob Bhula, taking advantage of a pitch that flattened out in weather much warmer than the previous day.

Not for the first time in recent years, England’s attack struggled to gain much movement from a sluggish surface and the Kookaburra ball. And with every indication that the pitch in the first Test may be very similar, England will be looking to Woakes or Curran to provide control with the older ball. Woakes, not entirely encouragingly, later reported that the Kookaburra ball was “softer after 40 overs than a Dukes gets after 80.”

There was, though, one reminder of the value of the variation that the left-arm of Curran offers. While the delivery that bowled Bhula did not appear to deviate in the air or off the pitch, the batsman did seem to misread the angle and, as a consequence, played down the wrong line. If Woakes plays, England will field an attack of four right-arm seamers.

Woakes is a bit quicker, however, and hopes his ability to bowl the wobble seam delivery provides an edge that he has lacked on previous overseas tours. He certainly used the skill to decent effect in the English summer and felt that it was the one ball that offered some threat here.

His overseas record is not in his favour. Woakes averages 23.45 with the ball – and, most pertinently, the Dukes ball – in his 19 Tests in England and 61.77 in his 12 Tests away from home when using the Kookaburra or SG ball. Curran averages 20.94 in his seven Tests at home and 105.50 in his four Tests away. Whichever way you look at it, Jimmy Anderson can probably expect, if fit, to return to the side for the Test series in South Africa.

Both Curran and Woakes may benefit from the presence of England’s bowling consultant on this tour, Darren Gough. He was one of the few England seamers to have managed to swing – both conventionally and reverse – the Kookaburra and will have told both men his success was derived, in part, from his preparedness to pitch the ball full in search of swing. Yes, it cost him the odd boundary. But it also ensured he continued to threaten.

Curran probably bowled fuller of the pair here and was rewarded with that wicket. But he was also thumped for a six back over his head by the impressive Allen. It may also be that Woakes, who played in four of the Ashes Tests compared to one for Curran, is considered the man in possession. Had Saqib Mahmood been considered fit, Curran would not have played here.

There’s little doubt over England’s opening pair. While Stuart Broad and Jofra Archer were clearly easing into the tour, they claimed three of the four wickets England managed. Broad, forced to wait until second change here, struck with his third delivery. Continuing the policy which brought him such success in the England summer, he bowled a fuller length and was rewarded when Jack Boyle misread one which took his off stump. Ken McClure was beaten for pace by a full delivery from Archer that struck him on the foot. Archer later picked up the wicket of Leo Carter, too, feathering a catch down the leg side. Neither spinner enjoyed any assistance from the surface, though Jack Leach was the more consistent of the two.

In between times, Allen and Bhula, who not so long ago were representing New Zealand U19, added 117 in 29 overs for the third wicket. Both looked high-class prospects but while was the one able to retire after reaching his century from 129 balls, it was Bhula, who spent six months on the MCC’s Young Cricketers scheme, who impressed with the way he dealt with the new ball. Both may have a future at the highest level.

All this suggests that England will have to take whatever chances come their way in the Test series. Here they put down a couple, with Allen dropped before he had scored – Stokes, at second slip, realised an edge off Archer would not carry to first slip and attempted a tough chance diving across Joe Root – before Pope, at backward square-leg, was unable to cling on to a tough chance when Bhula, on 58, pulled a long-hop from Matt Parkinson.

Earlier England extended their innings by 21 overs into the second day in order to provide time at the crease for more of their batsmen. With Root selflessly retiring on his overnight score, Pope and Jos Buttler settled in comfortably. While Pope, a little too expansive during his first stint in the Test team, left with some discipline outside the off stump, he lost patience against the left-arm spin and sliced a catch to cover. Buttler was fortunate to survive a similar error – Sandeep Patel making a fearful hash of the chance – off Theo van Woerkom‘s first ball of the day.

Stokes had no such issues. He smashed four fours and a slog-swept six in his 20-ball stay, showing no signs of the blow to the hand he sustained the previous day.

But it was a disappointing day for Mahmood. Struck down with a migraine, he was forced to stay in the hotel all day. With little prospect of breaking into the Test team, he may well have missed his only opportunity to play with a red ball on this tour.

There was better news for Joe Denly. Having suffered an ankle injury during the T20I series, he had been a doubt for this part of the tour. But he fielded through most of the day and will return to the team for the next game. If, as expected, he suffers no relapse, he is certain to play in the first Test. Jonny Bairstow, who has remained with the squad as backup, will consequently be sent home.

The England squad have a rest day on Thursday ahead of a three-day, first-class match against a New Zealand XI here from Friday. As things stand, England will probably field their Test XI in that match.