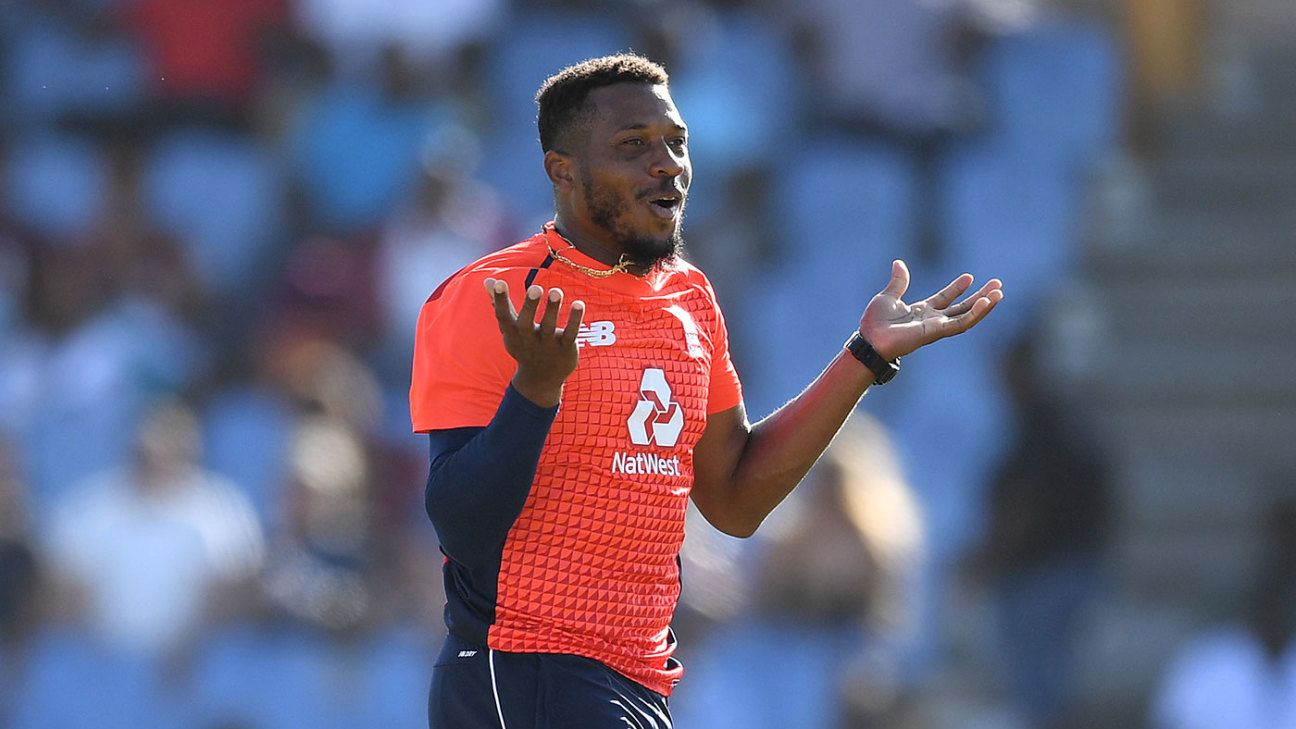 He may have been all but pigeon-holed as a 20-over specialist but, having done everything he could to thrust his name to the forefront of selectors’ minds in England’s opening T20I win over West Indies, Chris Jordan hopes his ODI World Cup ship has not sailed.

With the T20 World Cup more than 18 months away, the three-match T20I series in the Caribbean represents little more than bonus entertainment for a fan base already spoiled by the excitement of the preceding three Tests and four ODIs, and a chance for both nations to hone their thinking about the ODI World Cup starting at the end of May – West Indies have even retained their ODI squad and captain for the T20I series.

Jordan has not played an ODI in more than two years and his latest feats did come in the shorter format, but they reminded interested onlookers of his value with the ball and in the field.

For his part, Jordan said it was all about “enjoyment” and it was easy to see why. He removed Chris Gayle cheaply for the first time since the ODI Player of the Series returned to the fold for West Indies’ limited-overs campaigns against England, and dismissed Darren Bravo with a brilliant a caught-and-bowled to finish with 2-16 off three overs.

“The Caribbean is a lovely place to play cricket, my family will be here watching most games, just enjoy it and let results take care of themselves,” the Barbadian-born Jordan said, adding that he remained hopeful of securing a World Cup berth. “I hope the ship hasn’t sailed. I can’t get too far ahead in my thinking, I’m not that type of character. One game at a time and let the outcomes take care of themselves.”

Jordan revealed he had spoken about his one-day prospects with national selector Ed Smith.

“I’ve had conversations with Ed when squads are being picked and he’s always said I’m there or thereabouts, in the discussions,” Jordan said. “That gives me encouragement. T20 cricket is what I’m involved with at the minute, anything past that I’ll leave to the selectors and the captain.”

Jordan was also hoping for the best for Jofra Archer, who was also born in Barbados and is expected to qualify for England under ECB residency rules in time for the World Cup, should he be selected.

“I speak to him every day, literally every day, he’s like my little brother,” Jordan said of 23-year-old Archer. “One of the things I admire about Jofra, for a kid so young he’s got a good head on his shoulders. There is noise about him potentially playing in the series… if it happens I’m more than certain he’ll rise to the occasion because he’s that type of person and that type of character.”

Jordan said he continued to work hard on his bowling and fielding, which was sharply in focus when he tempted Bravo with a newly developed slower ball and then changed direction on his follow through to take that spectacular one-handed catch sprawling to his right.

“Not many catches are that easy, to be honest, you see them go down in games. You try to practice as much as possible, practice slip catching and outfield catching and when you get into game time when moments like that come you’ve almost played it over in your head already. I’m just glad it came off. I pride myself on my fielding in general. I do work hard on it.”

And of the slower ball, he said: “Yeah, I have been adding a couple of slower balls to my arsenal. I don’t want to give away too much on it given I got a wicket with it, but it’s a new one.”

Jordan had no qualms about not bowling at the death in the T20I series opener, which England won by four wickets with seven balls remaining. That role went to Tom Curran, who ended the match as the pick of the England bowlers, claiming 4-36 off his four overs.

“It’s normally my role in the team, one or two (overs) in the Powerplay and two at the death, but my role is also to adapt and be versatile, be ready whenever the captain calls on me,” Jordan said. “TC did a brilliant job, took four wickets and bowled a brilliant last over, but next time it might be me. That’s the type of team we’re in, we’re not selfish characters and we just keep everyone improving.”