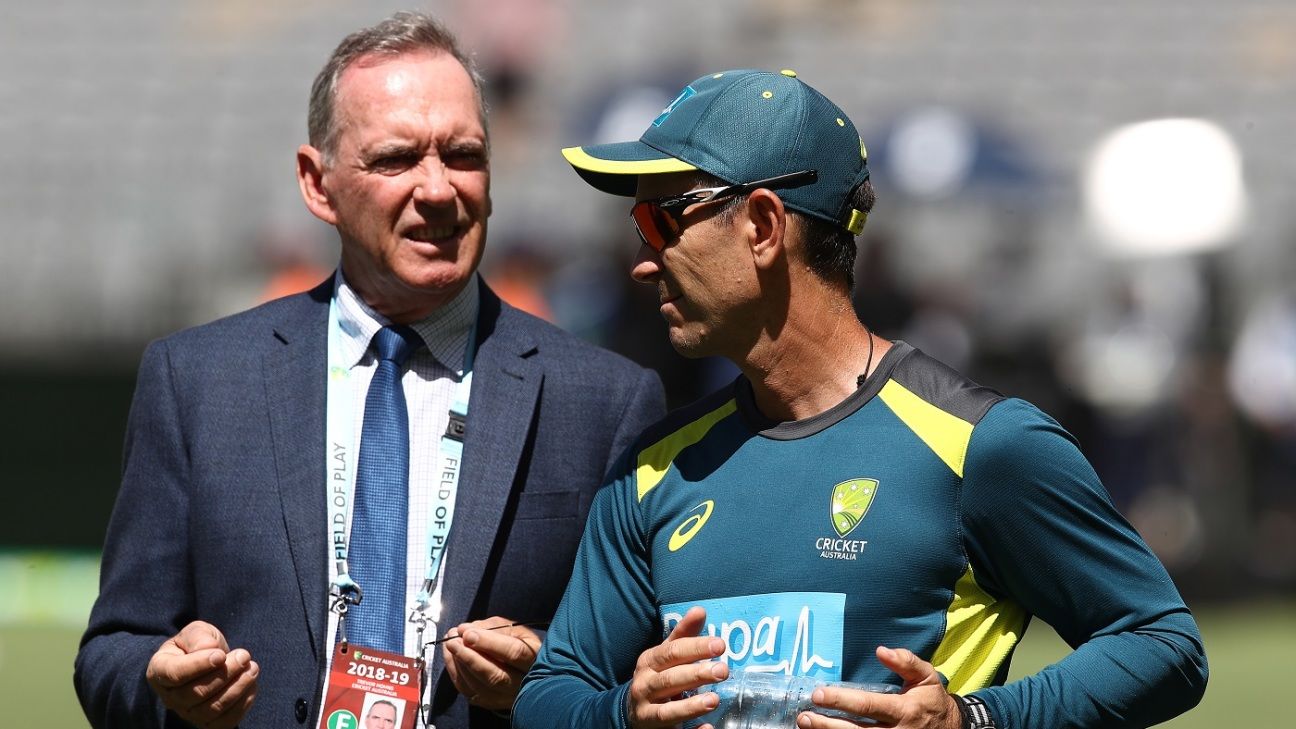 Australia’s chairman of selectors Trevor Hohns has no intention of following the soon-to-retire Greg Chappell out the door at Cricket Australia, wanting to see the role through to at least 2020 even as the governing body looks to appoint a new head of team performance and considers revising the selection structure.

In the wake of Chappell’s decision, revealed by ESPNcricinfo, to exit his dual roles of selector and national talent manager when his current contract expires at the end of this year’s Ashes series, it is understood that the 65-year-old Hohns is eager to continue in a role he has held since 2016, his second stint as chairman of the panel after also doing the job from 1996 to 2006.

The decisions of a selection panel comprising Hohns, Chappell and coach Justin Langer have been met with plenty of criticism this summer, far from a new thing for selectors to cope with. However, these critiques have taken place against a backdrop of debate over whether or not team performance is best served by the current selection model, and also whether younger minds, with first-hand experience of the T20 age, should be making selection decisions alongside deeper use of analytics.

CA had already pared back the panel by one last year, as Mark Waugh resigned and was not replaced, leaving T20 selections solely in the hands of Langer while Hohns and Chappell continued to share deliberations over the Test and ODI teams, plus under-age, national performance and Australia A squads. The former team performance manager Pat Howard was never entirely wedded to the concept of a selection panel, and it will most likely be left up to his full-time replacement – Belinda Clark is serving as an interim – to help CA decide on the best way forward.

Numerous luminaries have been connected to more substantial roles around Australian team performance, including Ricky Ponting, Simon Katich and Michael Hussey – all of whom are close to Langer. However, another strong contender is the Western Australia had of team performance Ben Oliver, who has enjoyed a varied career in cricket administration with WA, CA and also the ICC, having earlier player first-class cricket for Victoria.

On the final day of the Canberra Test, Chappell discussed his reasons for flagging his intention to retire, and also the philosophy behind his choices in selecting teams. “I’m really starting to find the time away from home a bit of a struggle,” Chappell told Fox Cricket. I’ve really enjoyed my various roles in cricket, not least playing, but coaching, administering and the selecting has been a great challenge. After a cycle, after a World Cup, after an Ashes series, let someone else have a go.”

Many players, coaches and observers of the game have at times wondered at the thinking behind Australia’s selections, and Chappell gave an insight that may settle a few arguments. “I think it’s a combination of the lot of it, but there is a fair bit of gut feel,” he said.

“I was lucky enough to go with a CA group to America a few years ago and talk with a few different sports, and we were at the Boston Red Sox and one of their head scouts was asked the question ‘what are you looking for’, and amid a whole range of things he said ‘if they don’t look like somebody, they probably won’t be somebody’. So it’s not that you see someone who is exactly the same as someone else but you see traits in them that have succeeded before.

“Probably the best example is Ian Healy, when we looked at Ian Healy years ago, there were other keepers who probably kept as well, other keepers who batted, but he just reminded us of Rod Marsh, the personality and the character of the guy. You just knew he would handle the travails of life as an international cricketer and thankfully that worked out pretty well.”

In terms of what he had found most rewarding about the job, Chappell reflected on the work he had done with an enormous number of young cricketers during their formative years, whether as a selector, coach or talent manager.

“The thing I enjoy most about it is they love the game as much as we ever loved the game,” he said. “I think it’s a much harder game to play now, particularly as a batsman with three formats, so to become a top class batsman is probably more challenging now than ever before, so to be able to pass on whatever knowledge you’ve accrued over 70 years of life is something that I’ve enjoyed and I think it’s kept me young. So just having that involvement has been an honour as much as anything else to be allowed to stay in the game this long.”