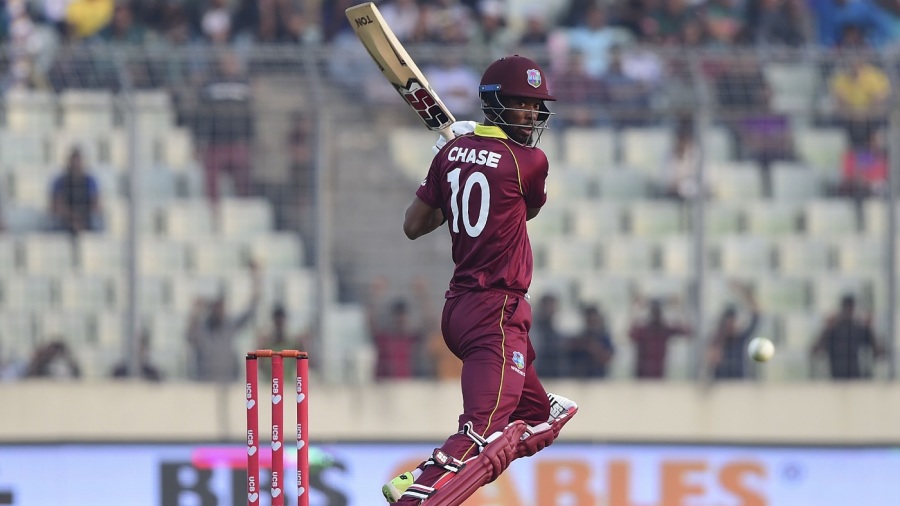 Roston Chase fell six short of his maiden ODI hundred, while Shai Hope scored an unbeaten 77 as West Indies beat Afghanistan by seven wickets in the first ODI in Lucknow. They now lead the three-match series 1-0.

After being put in, half-centuries from Rahmat Shah and Ikram Alikhil had taken Afghanistan to 126 for 2 around the halfway stage. But it was Alikhil’s run-out that proved to be the turning point. The batsman left his crease to congratulate Rahmat on his fifty with the ball still in play. And when Hope broke the stumps and West Indies appealed, he had to walk back.

Afghanistan couldn’t recover from there and were bowled out for 194 in 45.2 overs. For West Indies, Jason Holder, Chase and debutant Romario Shepherd picked up two wickets each, while the USA legspinner Hayden Walsh Jr, who became the 14th player to represent two teams in ODIs, also chipped in with a wicket.

West Indies lost two early wickets in their chase but Hope and Chase added 163 in a third-wicket stand to ensure West Indies were always ahead in the game. Chase fell when West Indies were seven away from the victory. Hope and Nicholas Pooran took them over the line with 21 balls to spare.

Earlier, Afghanistan didn’t have a great start as Sheldon Cottrell and Holder bowled testing lines and lengths. With just five runs on the board after four overs, Hazratullah Zazai swatted one past Cottrell for four but the bowler slipped in a searing yorker next to send Zazai’s leg stump cartwheeling. In the next over, Holder had Ahmadi caught at second slip to leave Afghanistan 15 for 2 at the end of six overs.

Rahmat and Alikhil too found it difficult to score and while Afghanistan played out 49 dot balls in the first ten overs, the two ensured there wasn’t a top-order collapse.

In the 11th over, Alikhil pulled Holder twice behind square leg for back-to-back fours and that changed things a bit. Afghanistan got to 50 in the 15th over before Rahmat lofted Shepherd down the ground for a six and swept Chase for four. At the other end, Alikhil top-edged Joseph for six, clobbered him to deep midwicket for four and brought up his fifty in 47 balls after being 4 off 17 at one stage.

Rahmat and Alikhil added 111 in 124 balls for the third wicket but the ball off which Rahmat brought up his fifty also saw his partner being run-out. Once that stand was broken, wickets kept tumbling at regular intervals. Najibullah Zadran was dismissed in the same over as Alikhil, caught at first slip off Chase for a duck. Rahmat and Asghar Afghan took the side past 150 but Rahmat too fell to Chase when he mistimed a scoop to Holder at backward square leg.

Asghar tried to hold the innings together and almost succeeded in it. At 188 for 6 with him and Gulbadin Naib in, Afghanistan were looking good for a total of around 230-240. But they lost their last four wickets in three runs and failed to reach even 200.

West Indies too didn’t start well. Mujeeb Ur Rahman beat Hope with carrom ball on more than once occasion but it was Lewis who fell to it. Playing back to a length ball, the left-hand batsman was trapped lbw. Shimron Hetmyer didn’t last long either and was caught-behind off Naveen-ul-Haq.

But after that Chase joined hands with Hope and a small target meant the two could take their time. Chase was the dominant partner in the century stand, hitting 11 fours during his innings, while Hope played the supportive role.

Though the Afghanistan bowlers were economical, they were not penetrative enough. Both Rashid Khan and Mohammad Nabi went wicketless, with former now having taken just three wickets in the last seven ODIs.

In the 40th over, Mujeeb got Chase to edge one behind but Alikhil couldn’t latch on to it. Chase was on 85 at the time and West Indies 24 away from the win. Mujeeb eventually bowled Chase but it was already too late.