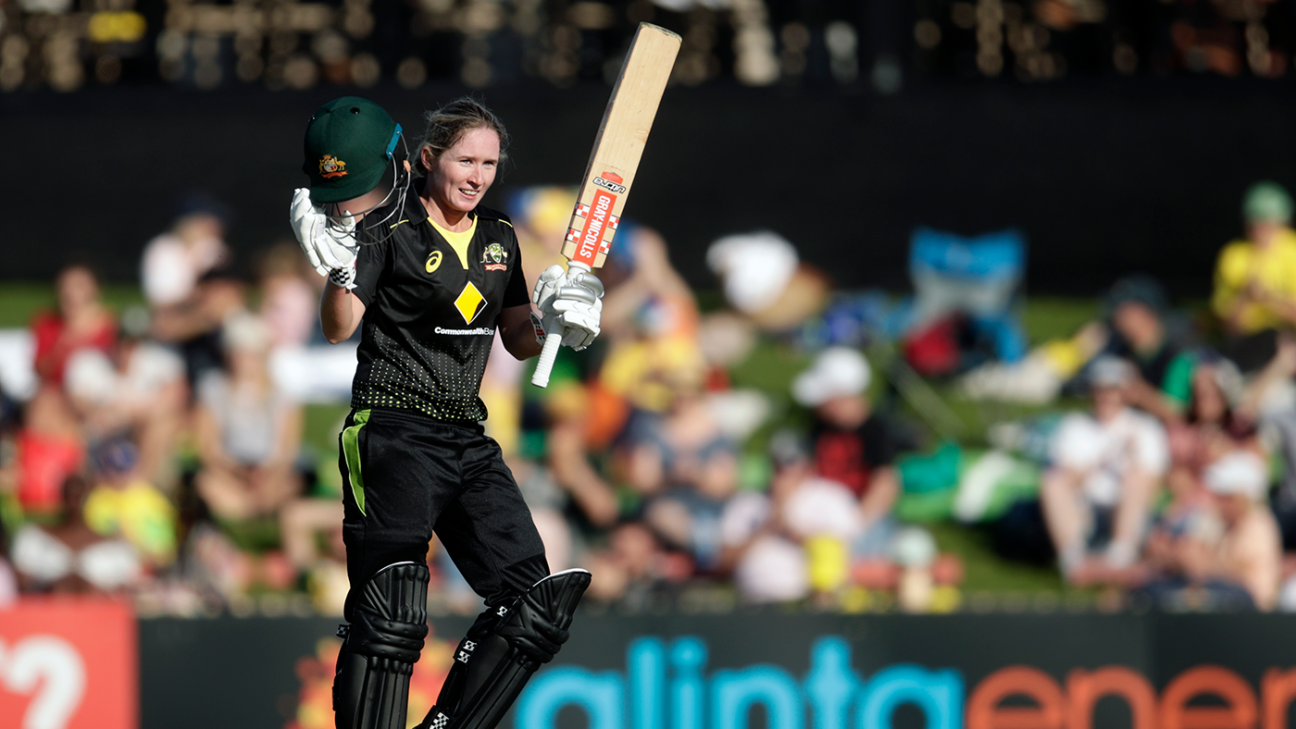 It is not quite back to the drawing board for Australia, but they will be forced to rethink their plans to Chamari Atapattu after Sri Lanka’s T20I captain struck a magnificent century at North Sydney Oval to put their attack under a type of onslaught they have not felt for a while.

Defending a score of 4 for 217 – based around Beth Mooney‘s own outstanding hundred – there was never the spectre of defeat looming over Australia, even as Atapattu regularly deposited balls into the stands, but the celebration from Megan Schutt when she finally got a yorker through in the closing stages suggested Australia were feeling the pressure after a West Indies tour where they were rarely tested.

A quick turnaround in the series, with the second match following on Monday evening under lights, doesn’t give much time to assess plans but Atapattu will be a clear focus in the debrief.

“She’s a clean striker of the ball and can take the game away from the opposition, which she has done pretty often in the past and has done against us before,” Mooney said. “So we’ll have to have a sit down and rethink our plans against her, but she was very impressive.”

“Atapattu had a day out… but in terms of what we are trying to do in terms of getting better and being the greatest team ever, it’s making sure we win games like that now rather than losing them”

Though Australia continue to raise the bar in the women’s game, with the T20 World Cup five months away it may serve them well to be put in situations where their resolve is tested although Mooney said the response to Atapattu’s innings showed what they have learned over the last couple of years.

“It’s been well documented that it’s happened to us a few times, Atapattu has done it to us, Harmanpreet Kaur did it to us the semi-final at the World Cup, and we sat down and had a rethink about what we were trying to do,” Mooney said. “Credit where credit is due, Atapattu had a day out. Unfortunately, she couldn’t get her team over the line but in terms of what we are trying to do in terms of getting better and being the greatest team ever, it’s making sure we win games like that now rather than losing them. We pegged her back pretty nicely and got her wicket at a crucial stage. In the past we haven’t been able to do that so I think it was a pretty good effort in the end.”

While the context around Atapattu’s hundred – the first by a Sri Lanka player in women’s T20Is and coming against the best team in the world – grabbed the attention in the second half of the game, Mooney’s hundred was a masterclass of T20 batting as well, coming off 54 balls.

Her career-best 117 against England in 2017 came in a defeat as Danni Wyatt also reached three-figures, and Mooney joked that she had been reminded that she wasn’t allowed to score hundreds on her own, but after missing out a couple of times against West Indies recently she was thrilled to make it count.

“The coaches joked with me when I walked off about how I felt and I said, ‘yeah, some good, some bad’ that’s my general response, but you’d take a hundred at the start of the day. I’m pretty happy with how I’ve been hitting the ball, it probably just hasn’t come off as I would have liked in the previous few games but nice to be scoring runs again.”