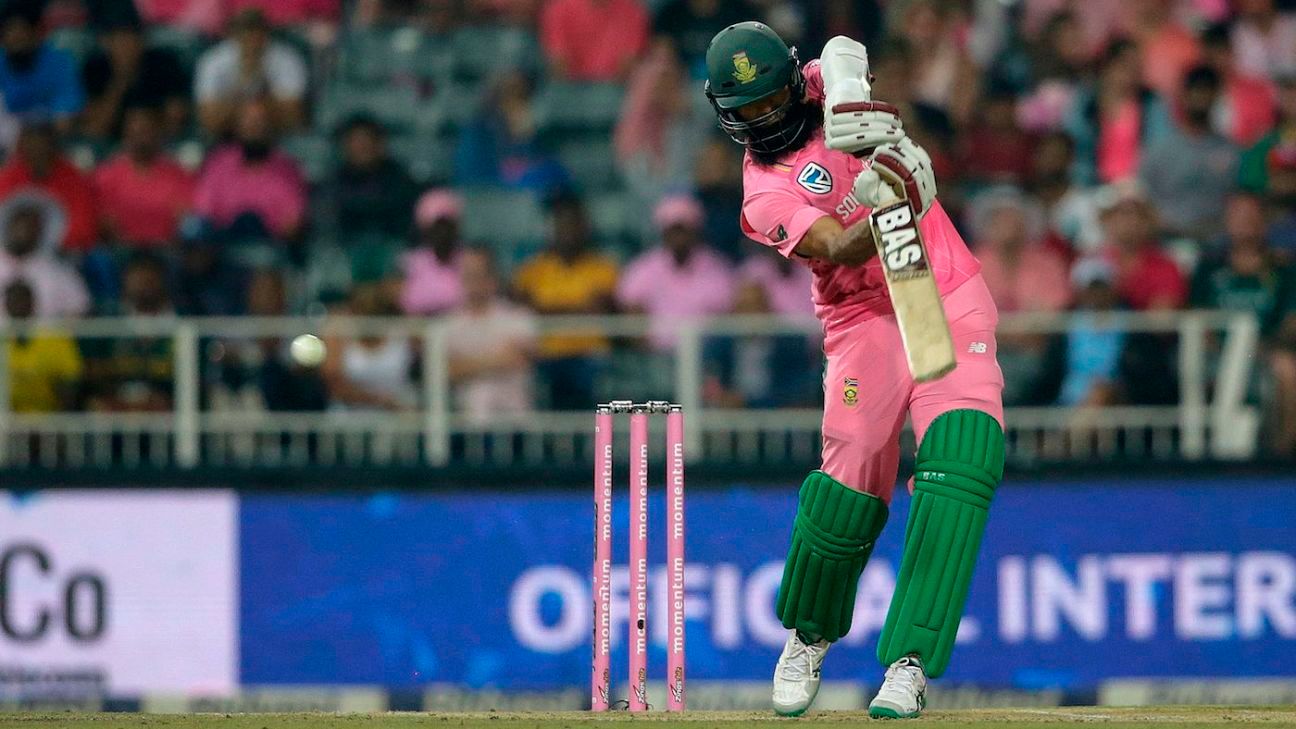 A see-sawing series turns celebratory as Pakistan and South Africa return to Johannesburg for the annual PinkDay ODI event at the Wanderers. This will be the eighth edition of the popular fixture, which has helped to raise nearly R 5 million (USD 370,000 approx) for various breast-cancer-awareness organisations over the past six years.and a crowd of 24,000 is expected with tickets sold out.

There’s a special mood at these pink games, and the fixture has created some singular memories over the years, such as when bees (perhaps attracted to the hot pink) stopped play halfway through Sri Lanka’s innings in 2017, with all 13 players, as well as two umpires, lying facedown on the grass. Last year, the PinkDay ODI was the only one out of six in which South Africa managed to beat India, and three years ago Imran Tahir hit the winning runs in a one-wicket win over England. Most notably, of course, the PinkDay was also the occasion of AB de Villiers’ defining innings, when he smashed 16 sixes – and the record for the fastest ODI ton – during his 44-ball 149 against West Indies in 2015.

Their misadventures with insect infestations at the Wanderers during this tour notwithstanding, Pakistan have all the ingredients to play their part in what should be another engaging encounter to add to the storied narrative of South Africa’s PinkDay games. The visitors have held their own during the three ODIs so far, even as controversy threatened to derail their tour after the second match.

Chasing has been key to success in the series so far, with Pakistan winning the first match by five wickets before South Africa reversed the result to draw level and then pulled ahead at a soggy Centurion. The quick turnaround leaves no time for what-ifs and navel-gazing from Pakistan, but the momentum is with South Africa and given the history of the occasion, the hosts will be very hard to beat.

Sarfraz Ahmed has barely left the spotlight since the second ODI, though the extra attention had more to do with his mouth than his gloves or bat. While there has been no announcement from the ICC about an official sanction for Safraz’ comments to Andile Phehlukwayo, his words have cast a shadow over the tour and on the field Sarfraz has pushed himself down the order as low as no. 8 with middling results. His actions will continue to be scrutinised, as will his returns as captain.

The no. 7 position in South Africa’s XI is one of the few places in the side without a settled incumbent. Andile Phehlukwayo staked a bold claim for the position with his career-best performance in Durban, but then leaked 71 runs at Centurion. It’s a position Dwaine Pretorius might also look to fill, and behind him Chris Morris and Wiaan Mulder – both included in South Africa’s T20 squad – will also have designs on it. Another strong all-round showing from Phehlukwayo would go some way towards holding off the competition.

Left-arm seamer Beuran Hendricks should get another chance on what has become his home ground with the Lions franchise, and if the track looks flat and hard South Africa may look to bolster their seam attack and lower order with allrounder Dwaine Pretorius, who also plays his domestic cricket here. If not, South Africa may look to swap Tabraiz Shamsi for Imran Tahir, who has a decent record at this ground with 7 wickets at 22.57, after Shamsi put in an inconsistent performance at Centurion.

Sarfraz Ahmed has apologised in person to Andile Phehlukwayo for his racially-charged on-field taunt, but is yet to face any official sanction for the incident from the ICC. That issue aside, Pakistan’s selections, like South Africa’s, will be influenced by conditions. While the top order is fairly stable, Faheem Ashraf’s seamers could put him ahead of Imad Wasim, though Imad’s handy lower-order runs at Centurion will be hard to ignore. Fakhar Zaman’s poor returns in the series could see him make way to set up Shan Masood’s ODI debut, Masood having looked in decent nick during the Tests.

Limited-overs pitches at the Wanderers tend to provide some of the best batting conditions anywhere in the country, and 400 has been breached three times in ODIs here (including twice, famously, in the same game). The last time South Africa and Pakistan met in an ODI here, South Africa racked up 343 for 5 to win by 34 runs and anything other than a belter would be something of a surprise. Don’t be surprised, though, if there’s a little rain around in the afternoon, as there often is at this time of the year on the Highveld.

“PinkDay will once again demonstrate the remarkable power of how sport can mobilise support for a cause that affects millions of people around the world.”
Cricket South Africa chief executive Thabang Moroe sets up the occasion of the eighth PinkDay ODI