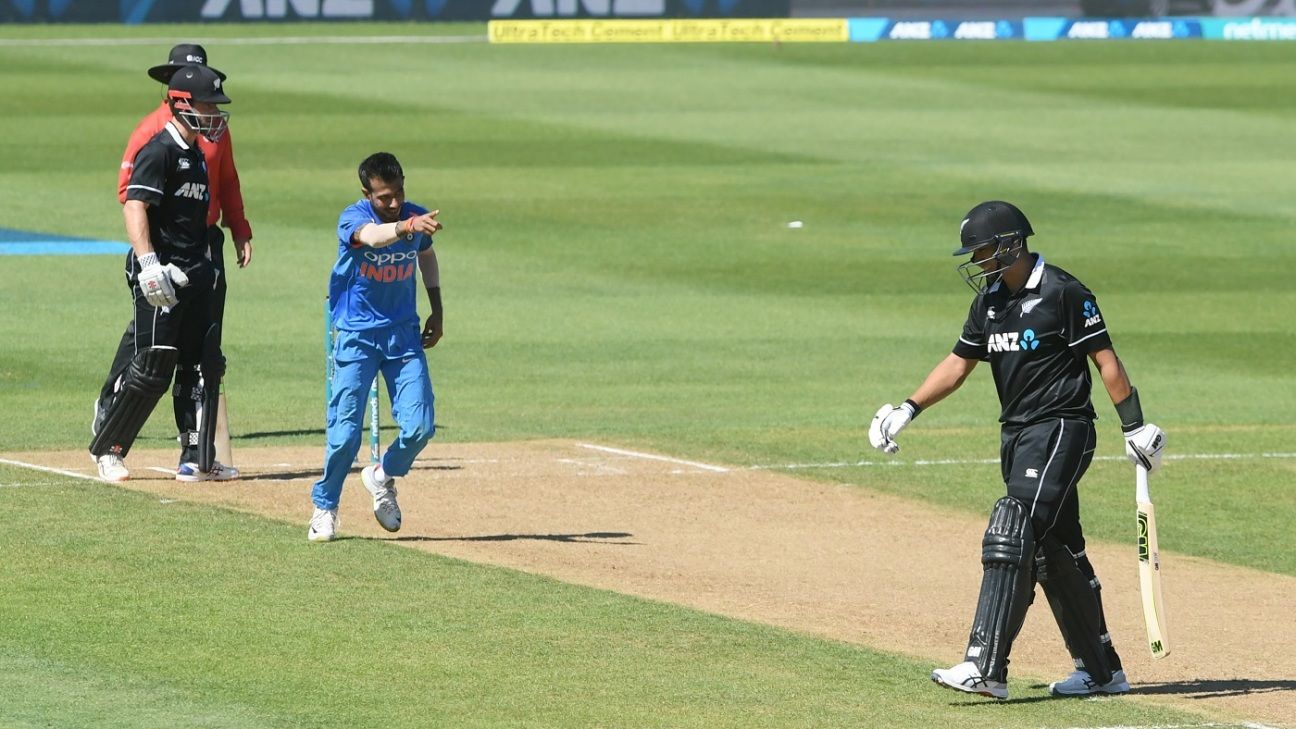 Hyped as a contest between teams that were so closely matched that the friction was expected to cause a spark, maybe even an explosion, the irony wasn’t lost when the first ODI turned out to be a damp squib. Much as New Zealand failed to show up after a 12-day break since the Sri Lanka series, India showcased how difficult they are to beat when they have three wicket-takers at their command.

Imagine having four once Jasprit Bumrah returns. Although when that does happen in the home series against Australia, the team might have to choose between Mohammed Shami’s strike-rate and Bhuvneshwar Kumar’s control and batting ability. For now, on the day when India’s constitution came into force in 1950, they may want to correct a small piece of cricket history: they have never won an ODI on January 26.

If New Zealand were lured into a sense of complacency after a series whitewash, the eight-wicket defeat – first in a series opener at home since February 2017 – should shake them from the stupor. Their strength, the middle-order, came a cropper against India’s wristspin, and even Kedar Jadhav had his moments, albeit not while fielding. Seven wickets were lost to the trio on a pitch that did not even offer too much turn.

Most of them were soft dismissals, a sign of rustiness, but equally a muddled mindset, and in some cases a consequence of techniques being found out, like Mitchell Santner’s dismissal after a short-ball barrage. It could also have been the pressure built by dot balls. There were 142 in 38 overs, which seemed to affect Ross Taylor, although he was cleverly deceived in the air as well. Or simply an aberration, like Kane Williamson holing out to long-on when he needed to bat through the innings.

A fact that they could take refuge in is that India’s wristspinners tend to get easier to negotiate as a series progresses. England handled them better after going one-nil down in Nottingham last year, eventually winning the series. Even the Australians, who had trouble picking Kuldeep Yadav in the Sydney Test milked him in the subsequent ODIs in Sydney and Adelaide. Having shown that they have the techniques and the mental fortitude to tackle quality spin in the UAE lately, can they enhance their reputation by bouncing back at Mount Maunganui? It might help if the openers got some runs.

Lockie Ferguson cranked it up with the ball, even though there were not too many tangible gains to be had in Napier. He ended up with the wicket of Virat Kohli, who was out hooking to a ball that hurried onto him. It had an immediate impact on the incoming batsman Ambati Rayudu, who was leaden footed in anticipation of another bouncer and unwilling to cover the line, as he nicked his first ball between keeper and slip. Going forward in the series, that short burst of hostile bowling is something the fast bowler could use to his advantage, knowing that he was able to rattle the Indian batsmen.

Ambati Rayudu had no game time before arriving in Australia and it showed in the first two ODIs he played. Things have got progressively worse, as his bowling action came into question, his fielding was found out, he was omitted from the side that sealed the series in Melbourne and Ferguson gave him an intense working over in Napier. It’s baffling that he should return to international cricket after a break looking so raw. But Rayudu has already retired from first-class cricket, the one place that could have enabled him battle-ready. While he has had the faith of the team management, there is a young man with a truckload of first-class runs waiting in the wings.

India might not want to make any changes yet. There’s time for that later with Virat Kohli being rested from the last two ODIs and Hardik Pandya joining them soon.

One-nil down, New Zealand don’t have the luxury of time. Any corrections would have to be made soon. As such, there wasn’t much wrong with their team combination. They have depth in both departments, the only question, and that maybe determined by the nature of the pitch in Mount Maunganui, is whether they want to go in with their own wristspinner Ish Sodhi. He fared well at the venue, taking five wickets in the two matches against Sri Lanka recently. Tim Southee could be the one to make way, should New Zealand tinker with the XI.

The most recent matches against Sri Lanka were high-scoring affairs, with three 300-plus totals and a 298. Generally quicks have fared better at the venue than spinners as far as wickets go, but they have also been more expensive, conceding runs at 5.89 as opposed to 4.83 for spinners.

“We have been playing for a long time, so it’s a normal thing for us, it’s pretty routine. We enjoy it, the good thing with Virat is that we rotate the strike well”
Shikhar Dhawan on what makes his partnership with Virat Kohli tick