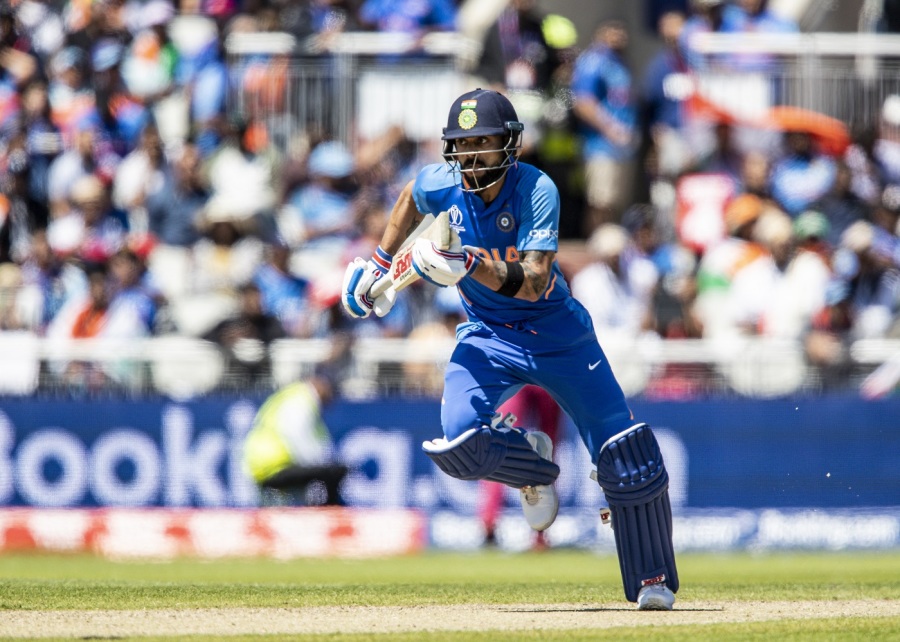 Brathwaite c Boult b Neesham 101. It’s been 16 days since that happened, and it’ll be 17 days when tomorrow’s semi-final begins. For New Zealand, it will be 17 winless days.

And yet, here they are, two wins away from getting their hands on the World Cup. The carping about all the things that have brought New Zealand to this point – the tournament format, the privileging of the net run rate as tie-breaker above head-to-head or any other measure, the washing-out of key matches – is immaterial now.

They’re semi-finalists. Just the same as India, Australia and England. Equals, even if they aren’t widely seen as that.

When Sanjay Manjrekar asked them who their preferred semi-final opponents would be, after India’s win over Sri Lanka on Saturday, Rohit Sharma and Virat Kohli were far too smart to give him a proper answer. Manjrekar made his own preference clear – “I would want India to play New Zealand more than England” – and while India’s vice-captain and captain may have agreed with him privately, they know there’s no such thing as an easy semi-final.

They know all the pressure will be on India, all the expectations theirs to live up to. They topped the league table for a reason, and are favourites for precisely that reason. They have the top two batsmen in ODI cricket, and the No. 1 bowler, and their players have too much experience of big games to treat them as anything but what they actually are: cricket matches like any other, which they are perfectly equipped to win – no matter who they’re facing and in what conditions.

New Zealand have lived most of their cricketing history as underdogs, and they will relish being where they are. “People aren’t expecting us to win, and from my point of view I think that’s a good place to be in,” their coach Gary Stead said on Sunday. “If that’s the case we can go out there and hopefully play with some real freedom.”

That kind of freedom can make any good team dangerous, and New Zealand, for all their recent travails, are more than just a good team. They have a top-drawer pace attack, a group of quality top-order batsmen, and allrounders who give them enviable depth. Form hasn’t been a friend to some of their big-name players, but who’s to say Tuesday won’t be their day?

Pakistan’s 1992 revival tour is over, but New Zealand might be thinking of their own version of it. Of being the team that scraped through in fourth place, with dollops of luck on their side, before hitching themselves to an irresistible wave of… what’s Kiwi for haal?

He missed the match against England with a hamstring strain, but he’s returned to fitness, and New Zealand will be delighted to have Lockie Ferguson back in their attack. Ferguson is their highest wicket-taker in this World Cup, with 17 at 18.58, and his key contributions have come in the middle overs (11-40), where he’s taken 12 of his wickets, at 17.20, while only conceding 4.4 per over. No one’s taken more wickets in the middle overs in this tournament, and no one who’s bowled at least 20 overs in this phase has a better average or economy rate. Ferguson’s presence ensures New Zealand’s attack has bite right through the innings, and India will be mindful of his threat.

India have plenty of decisions to make over their bowling combination, one of which is whether to pick a sixth bowler. Whether or not they do so, Hardik Pandya will have an important role to play. Virat Kohli has talked up his ability to “think like a batsman” while he’s bowling, and teams have found it difficult to put away his cutters and slower bouncers, but if the Old Trafford pitch – a fresh strip is to be used for the semi-final – is flat, New Zealand could look to go after him and see how he handles it.

Two quicks or three? Two wristspinners, one, or none? The batting line-up seems more settled than the bowling attack, but India might be tempted to bring back Kedar Jadhav and give themselves six bowling options.

New Zealand seem to have an easier selection to make, with one expected change in the pace attack with Ferguson returning in place of Tim Southee.

Old Trafford has been a resolutely bat-first venue in recent times, with the team doing so winning each of the five most recent ODIs at the venue. The average first-innings score in those matches has been 323 for 6, so a flat pitch can be expected. Pace (62 wickets at 28.9, economy of 5.7) has been more of a threat than spin (12 wickets at 89.4, economy of 6.1) in those five games.

Overhead conditions could be influential, with cloudy skies expected over Manchester and intermittent showers forecast for Tuesday.

“Yes, we played with five bowling options because it gives us more depth in batting and mentioning the toss factor as well, if you are chasing a big total, then you need a bit more depth in batting. So yes, we played with five. We are up to reviewing that. Otherwise… I was just told I got Kane [Williamson] out (in the Under-19 World Cup semi-finals in 2008) so I can bowl any time… Yes, having said that, it’s open for a discussion because we need to be very balanced with what we take into the field.”
India captain Virat Kohli on whether India need a sixth bowler

“Every side in this top four has beaten each other on a number of occasions. No side has gone through the comp[eition] unbeaten, so there are a lot of parts to it that make this top four really exciting.”
New Zealand captain Kane Williamson