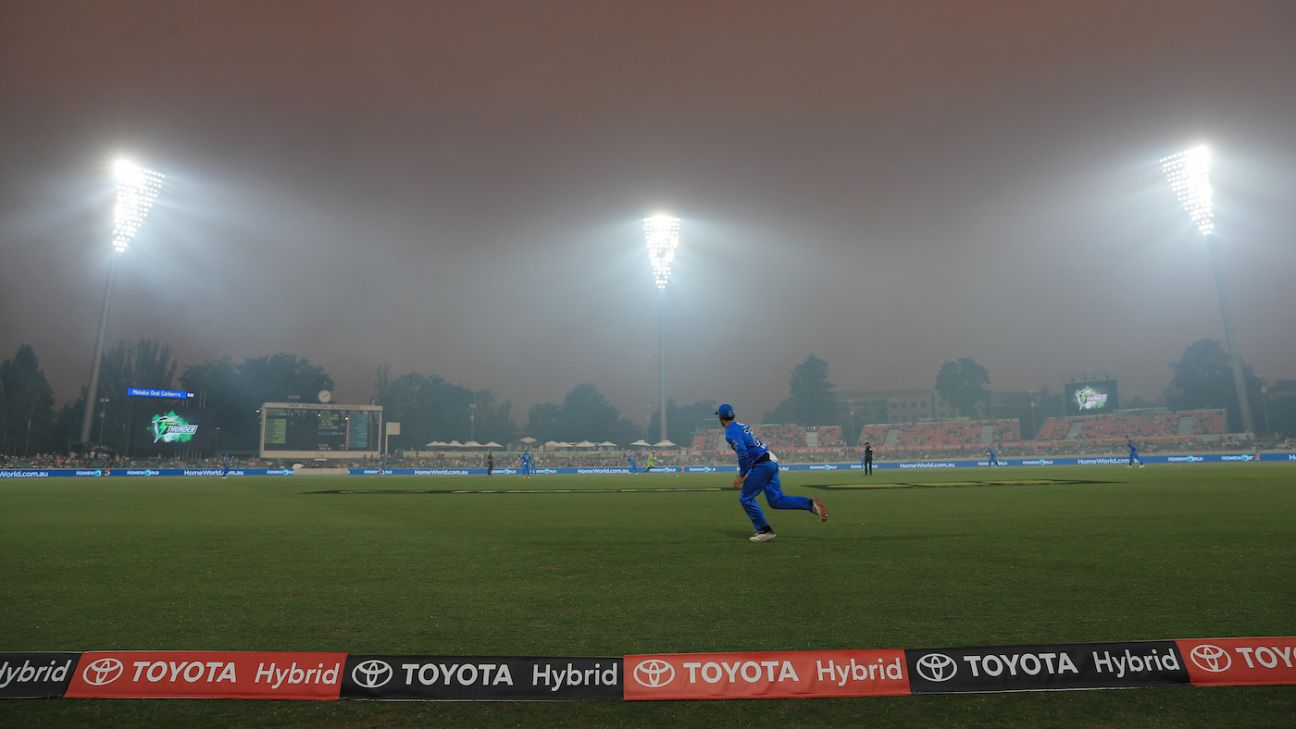 Cricket Australia is preparing for the possibility that play in the New Year Test in Sydney could be halted by smoke from the bushfires that are devastating vast areas of New South Wales.

On Saturday, the BBL match between the Sydney Thunder and the Adelaide Strikers in Canberra was abandoned when heavy smoke drifted across the Manuka Oval with the game four balls short of being a result. The initial reason for the suspension was the reduced visibility caused by the smoke although the poor air quality was also an issue.

Sydney has suffered a number of days of thick smoke shrouding the city and earlier this month the Sheffield Shield match between New South Wales and Queensland was completed in a heavy haze which produced an Air Quality Index (AQI) of 170 which sits in the ‘unhealthy’ band.

An AQI of 300 and above falls in the ‘hazardous’ level and is when ICC guidelines say umpires can consider suspending play.

“We hope not, but potentially,” Peter Roach, CA’s head of cricket operations, said of the Test being possibly halted. “What we’ve seen in Sydney and Canberra is that it comes to a point where it becomes a challenge. Rules are in place, like rain, to add time for suspended play.

“What we are finding is that it can come in quick, but it can also go quick so it’s unlikely it will be there for a full day. We might see some challenges across that day, but we’ll play it like rain or adverse weather. What we’ve seen is about one day in ten is proving a challenge, we hope it won’t come during the Test but we also understand that it might.

“We have concerns when the smoke is around because it is a challenge on those two metrics: visibility and breathing.”

After the Sheffield Shield match, NSW spinner Steve O’Keefe said: “That air quality was shocking. The doctor was all over it and speaking to us about it, and the fact the game wasn’t going to go all day was considered, but in the future they need to look at it because it’s not healthy – it’s toxic. It got to the stage we weren’t going to come off for quality, it was more about visibility. It was getting hard to pick the ball up. I’m sure they’ll address it. It’s a bit left field to have something as severe as this.”

Peter Siddle, playing for the Strikers, was on the field when play was suspended in Canberra. “I’m feeling alright…the smoke was thick, we’d dealt with it the night before at training, as you could see from TV it came in quickly – into that fifth over it changed dramatically,” he said. “If you sit next to a camp fire, just imagine that, that’s what it felt like in the field.”

In statement issued at the weekend, CA said: “CA, alongside relevant state cricket associations and BBL Clubs, is closely monitoring the air quality and visibility in areas impacted by bushfires.

“In line with ICC, Australian Institute of Sport and relevant government guidelines, we are maintaining vigilance on the ever-changing air quality in locations where games are impacted by poor air quality.

“As the safety of players, fans and staff is our number one priority, the guidelines state what needs to be measured and looked for. We will constantly monitor the situation and be prepared on the ground in the case of any circumstance, as we know conditions change very quickly in these scenarios.

“At BBL games played in areas impacted by bushfires, a discussion and assessment about air quality will be added to the pre-match medical briefing hosted onsite 60 minutes prior to the scheduled match time.”

In November a T20I between India and Bangladesh in Delhi was severely impacted by smog which led to an AQI of over 400.